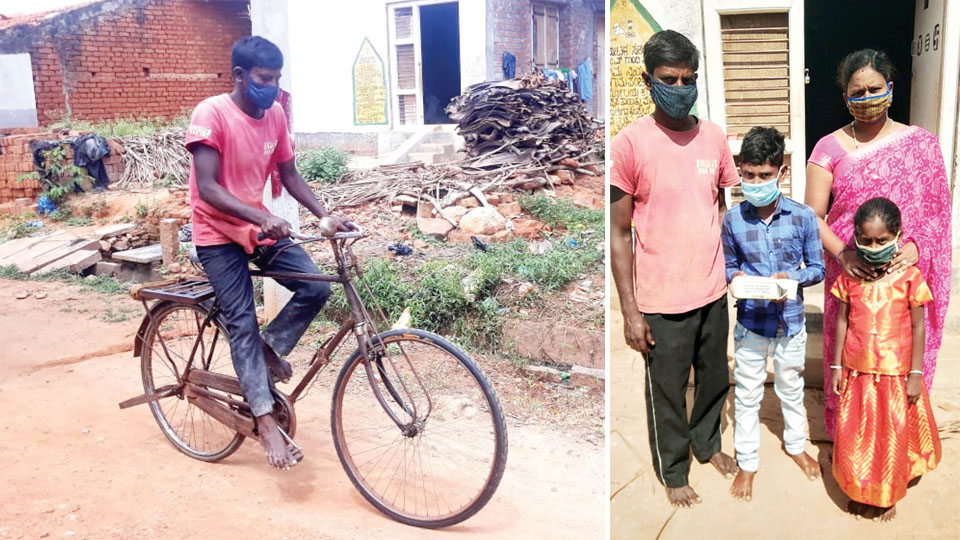 T. Narasipur: A person has pedalled 280-km just to bring medicine for his son from NIMHANS, Bengaluru, due to non-availability of State Transport buses following total lockdown till June 7.

The State Government has restricted inter-district movement to check the spread of Corona positive cases causing hardship for several persons.

Anand, aged 45, of Ganiganakoppal village in T. Narasipur taluk, is the person who has pedalled 280 kms in three days to bring medicine for his specially abled son, from NIMHANS, Bengaluru.

The boy has been taking treatment for the last 10 years and missing one cycle of medication means extending treatment for another 18 years. To ensure that his special kid does not miss it, Anand set on his bi-cycle from his village on May 23 and started his journey towards Bengaluru. After covering Bannur, Malavalli and Kanakapura, he reached Halagur where he tasted lathi as the Police was dispersing a mob. Somehow, he managed to escape from the scene and rested at a temple in Kanakapura on that night, empty stomach.

“Next day, I got up at 3 am and started my bi-cycle journey and reached Banashankari in Bengaluru at around 10 pm. With no space available to sleep, I went to sleep in front of a house. At that time, the house owner heard my story and offered food to eat and place to sleep. On May 25, I went to NIMHANS, met doctors and explained them how I reached Bengaluru to collect the medicine for my son. The shocked doctors not only gave the medicine but also gave me Rs. 1,000 and told me to reach the village safely. I started from the Hospital at 10 am on May 25 and reached my village at around 4 pm the next day (May 26),” Anand noted.

He said his was a small family and he works as mason. He has a daughter and a son, Bhairesh. When he came to know that his son was  specially abled, he was taken to Bengaluru for treatment. And he is being treated for the last 10 years. According to doctors, Bhairesh must be given medicine for 18 years without break. In case of stopping mid-way, the medication will be extended for another 18 years. So, he had no option except to rely on his own transport, bi-cycle, to reach Bengaluru to bring medicine.

“The medicine are available only in NIMHANS Hospital and nowhere else. So, I had to go there only to get it. The doctors give the medicine that was sufficient for two months. By the time the medicine was getting over, the Government declared lockdown and suspended the bus service. Not ready to make my son to miss the cycle of dose, I hopped on my bi-cycle to bring the medicine from Bengaluru as friends and relatives declined to help me citing Corona reasons.”

Asked whether he was not tired for peddling 280 kms, Anand said smilingly “I forgot everything when I saw smile on my son’s face after reaching back my village.”