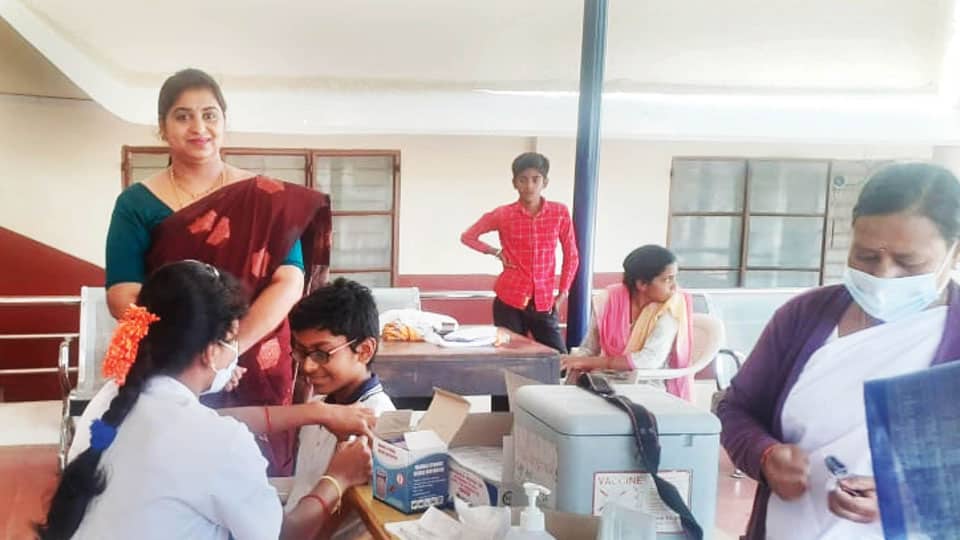 In Mysuru district, 92,907 children aged between 12 and 14 years are eligible for the vaccination. Health workers are visiting schools and are administering the first dose. Those born in 2008, 2009 and 2010 — those who are already above 12 years of age — are eligible.

Speaking to Star of Mysore this morning, District Health Officer Dr. K.H. Prasad said that the response from the children to vaccination was overwhelming and they are enthusiastically taking the jabs. “We have administered vaccines to 57,498 children of the target of 92,907 (as on Apr. 8) and we will achieve the 100 percent target within a week or so,” he said.

Of the target population of 1,26,643 adults to receive the booster dose, 73,767 have already been administered vaccines, achieving a target of 58.25 percent. In total, 52,33,796 doses of vaccines have been administered in the district since the launch of the vaccination in January 2021.

The Union Health Ministry yesterday announced that the precautionary or third dose of COVID-19 vaccine would be made available to the 18+ population at private vaccination  centres. It would be the same as the previous doses.

HOW MUCH BOOSTER DOSE WILL COST

Agency reports today said that the Serum Institute of India has announced that end-users will have to pay Rs. 600 for a Covishield booster dose and the hospitals will get it at a discounted price. Plus there will be vaccine administration charges that might differ from hospital to hospital.