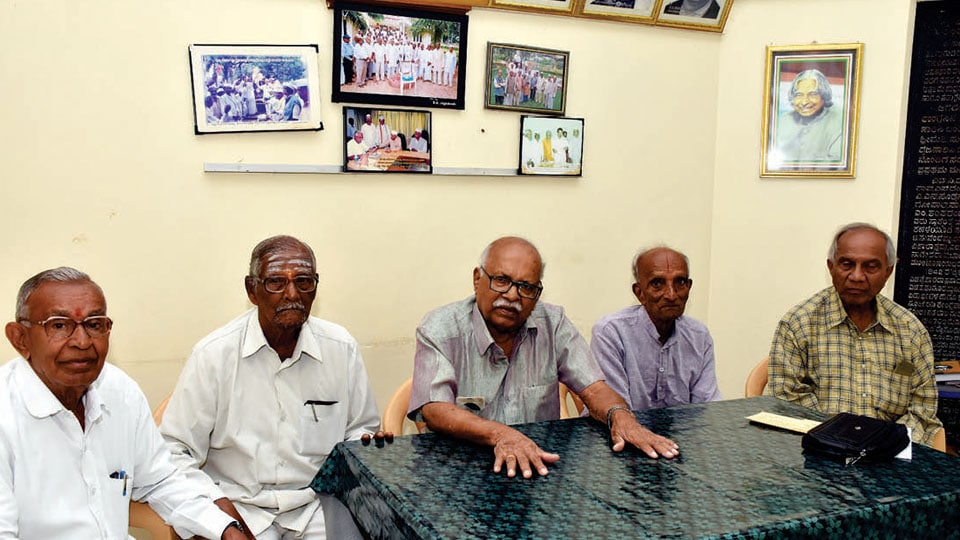 It has been 72 years since we got Independence and the 73rd Independence Day is round the corner. It is time to remember those noble souls who have sacrificed their youth and lives to the Nation and here we turn back those history pages to enlighten ourselves and appreciate their sacrifices.

From the 1857 revolt, often referred to as ‘First War of Indian Independence’ to 1947, lakhs of people have participated in the freedom struggle. This particular revolt against British rule ultimately culminated in developing a sense of identity for the nation’s countrymen under the leadership of a wide spectrum of great minds including Aurobindo and Tilak to Mahatma Gandhi and Subhas Chandra Bose.

Hundreds of people from the erstwhile Mysore State actively participated in the freedom struggle and only 31 are amidst us today. When the Mysore District and City Freedom Fighters Association was formed, over 150 persons had enrolled themselves, says Association President Dr. M.G. Krishnamurthy, speaking to Star of Mysore on the occasion of 73rd Independence Day on Aug. 15, 2019. The Association is still active under the tutelage of Krishnamurthy and General Secretary Prof. H.N. Ashwathnarayan. Notable members include Y.C. Revanna, B. Srikantaiah, C.R. Rangashetty, T. Venkatachalaiah, T. Puttanna, Dr. M. Somashekar and G.L.N. Ayya, all in their late 80s and early 90s.

‘My teacher was my inspiration’

Hailing from Maralavadi village near Kanakanahalli of Bengaluru, Dr. M.G. Krishnamurthy fondly recalls those days and says his school teacher was his inspiration. He says his teacher candidly narrated the hardship and suffering of many young souls who braved all odds and sacrificed for the nation.

“I was studying in Gandhivadi Sorekayidoddi Kariyappanavara Rural High School in Kanakanahalli. Those days, we used to sketch the picture of National Flag using red and black ink on  ‘Gandhi Topi.’ Wearing the Gandhi cap made us proud and we all used to chant the slogan ‘British, Quit India’ and hit the streets,” remembers Krishnamurthy.

“After completing his classes, Kariyappa maestru used to narrate life and works of Mahatma Gandhi. He used to say, everyone should cultivate patriotism and give importance to education. We should rise above any biases. This created a sense of pride and patriotism among us,” he says.

“Kariyappa sir narrated the sorry state of affairs and illustrated how British looted all the wealth we had and carried them to their land in the form of gold. National leaders declared to attain ‘Purna Swaraj or complete independence’ in 1930. Even as Subhas Chandra Bose formed Indian National Army (INA) in 1942, his premature death cut short our hopes of independence,” he explains.

“As the situation reached a critical stage in Aug. 1947, British arrested most of our political leaders. Thousands of students started agitating on the streets. On Aug. 9, 1947, we started picketing in front of the Taluk Office and over 25 students were arrested; we refused meals inside jail. On Aug. 13, ‘Kidi’ newspaper carried the headline, “Why such brutal punishment to innocent children?” And two days later, with Second World War coming to an end, we got freedom on Aug. 15, with unfortunate partition of India and Pakistan.”

“When we were in celebration mood, we heard the news that the Dewan of Mysore Arcot Ramasamy Mudaliar and Thambu Chetty had advised the then Maharaja not to accede to Independent India which created much furore. The common people were for the Maharaja of Mysore joining the Indian Union but the idea was successfully thwarted by Arcot Ramasamy. As a result, many leaders like K.C. Reddy, Hanumanthaiah, M.V. Venkatappa, K.T. Bhashyam, Subrahmanyam and others started a movement now popularly known as ‘Mysore Chalo’ and marched together to lay siege to Mysore Palace.” Now ‘Mysore Chalo’ is observed on Oct. 24.

“I travelled from Kanakapura to Mysore to the join the movement. At that time, my grandmother’s residence was on D. Subbaiah Road where I and my friends M.N. Jois, Suryanarayan Rao and others assembled and marched to the Palace Gate every day. It was like a compelling daily attendance and it became a routine for Policemen wearing Khaki shorts to shoo us away,” he recollects.

“On Aug. 25, when we (around 10 to 12 in number) were picketing near the Palace Gate between the Anjaneya and Ganapathi temple, Police arrested us and we raised slogans ‘Arcot Boycott –  Thambu Chetty Chatta Katti.’ They took us including Lingannaiah in a black van to probably a Judge’s residence where they asked us to go home which we refused. Only Lingannaiah agreed to return home and they released him but locked six of us in Mysore Central jail.”

“Later our leaders including K.C. Reddy, Hanumanthaiah and Sahukar Chennaiah persuaded the Maharaja, who agreed to accede to Independent India and set up the responsive Government. Later we were released from jail,” Krishnamurthy says.

When Ramaswamy was shot dead

“On Sept. 19, 1947, an agitation was launched to install a responsive Government in Mysore State. On that day, many agitators including M.N. Jois, A. Ramanna, Agaram Rangaiah, Vedanta Hemmige and Hejjige Linganna were marching together to lay siege to DC Office. The intersection, which is now known as Ramaswamy Circle, was called Five-Light Circle then and there was no road or houses at that time. Mounted on a cavalry horse, DC Nagaraja Rao, with a gun in his hand, was parading towards Railway Station and around 20 Policemen were following him. Chamaraja Road, which is now a Double Road, was just an ordinary avenue. At that time, I was just 17. I had also joined a group of students assembled at that spot who had flags in their hands. One of them was Ramaswamy who was just 12. When he started marching ahead, Nagaraja Rao warned that he will open fire if anybody steps forward. Ramaswamy ignored his warnings and on the spur of the moment, the DC pulled the trigger and Ramaswamy fell on the ground and died.”

‘I have not received any site from Government’

“Then I was 19 or 20. We were all students and marched together raising slogans at Angadi Beedhi in Chamarajanagar during ‘Mysore Chalo’ movement. While we traversed the street, people greeted us and gave fruits, milk and water. On reaching Kavalande village, Police arrested us and after spending two months behind the bars, they let us out after we got Independence.”

After his release from jail,  Rangashetty worked in Central College, Bengaluru, which he quit in 1957 and joined University of Mysore and retired in 1980. “I have not received any site from the Government and I have not approached any politician for recommendations.” Residing in Devamba Agrahara of K.R. Mohalla in a rented house paying Rs. 4,000 per month, Rangashetty said he is getting pension and has requested authorities to provide him a site considering his active.

‘We had to walk back from Kakanakote Forest’

When Quit India Movement kick-started in 1942, I was just a 15-year-old student and my hometown K.R. Nagar did not lag behind in organising protests and public rallies. Many merchants and workers also participated in the public rallies. I have also taken part in many of those rallies.

Once the Police arrested most of us and later we were freed in Kakanakote Forest (Nagarahole now). We had to walk back home barefoot. After we got Independence, ‘Mysore Chalo’ movement had started where a large number of people from Mysore, Chamarajanagar, Nanjangud, KR Nagar and other places participated. Our team had 12 members and we set fire to containers fastened on palm trees to extract toddy. When we reached Bilikere, Police arrested us. Over 800 persons including Nijalingappa, Tulasidas Dasappa, Yashodhara Dasappa and T. Mariyappa were also prisoners in the Central Jail and later some of them were transferred to Shimoga and Bellary jails. After my acquittal, with the help of postman Javaregowda, I got a job in middle school and worked as a teacher,” says Y.C. Revanna.

“Freedom Fighters Bhavan was built in Subbarayanakere Park in the heart of the city, also now called the Freedom Fighters Park. When Vedantha Hemmige was the President of Freedom Fighters Association, he made arrangements to shift the bust of Mahatma Gandhi located at Gandhi Square and later we installed it here,” said Y.C. Revanna. “Freedom fighters initially received a pension amount of Rs. 50 and later it increased to Rs. 100, 200 and 500. Now it is Rs. 10,000,” he adds.

I rushed out of my class to join padayatra’

I was studying in Hardwicke School and was just 12-years-old. Hearing slogans and a lot of noise on the street, I rushed out of my class and saw a group of students on padayatra and raising slogans,” says Prof. H.N. Ashwathnarayan, a resident of Krishnamurthypuram.

He also remembers his participation in ‘Mysore Chalo’ and when Ramaswamy was shot dead. “Several freedom fighters including Hejjige Linganna, A. Ramanna and Ballal were with us on that day and we spent seven days in jail. When the Maharaja agreed to join the Indian Union, we were all released,” he added.

‘Ramaswamy was my childhood pal’

I was 7 or 8 at that time. When Mahatma Gandhi visited Mysore in 1940, I accompanied my father Yathirajulu Naidu to see the Mahatma at Pura Bhavana (Town Hall). I felt ecstatic when I spoke to Gandhiji and he even patted me on my back,” fondly remembers B.Y. Venkatadri.

“We were living in Halladakeri opposite Ramaswamy’s house. Ramaswamy was my childhood pal, but he was two years older. At that time, I was studying in Sarada Vilas School which was run at Lansdowne Building and we participated in many agitations,” he added. Venkatadri too remembers Ramaswamy and how he was shot dead by DC Nagaraja Rao.

At the time of freedom struggle, I was 14 or 15. In one of our agitations, son of a Tahsildar headed our team. Many notable activists guided us and set an example for youths to take part in the ongoing struggle. After Independence, I completed my graduation and post-graduation in Maharaja’s College.” – T.  Venkatachalaiah, 92

I was also part of the freedom movement in 1942 and 1947. We had (about 26 members) launched a padayatra from K.R. Nagar to Mysore Palace. As a result, we were arrested and had to spend one month in the Central Prison. We were later released after the then Maharaja agreed to join the Indian Union.” – T. Puttanna, 88