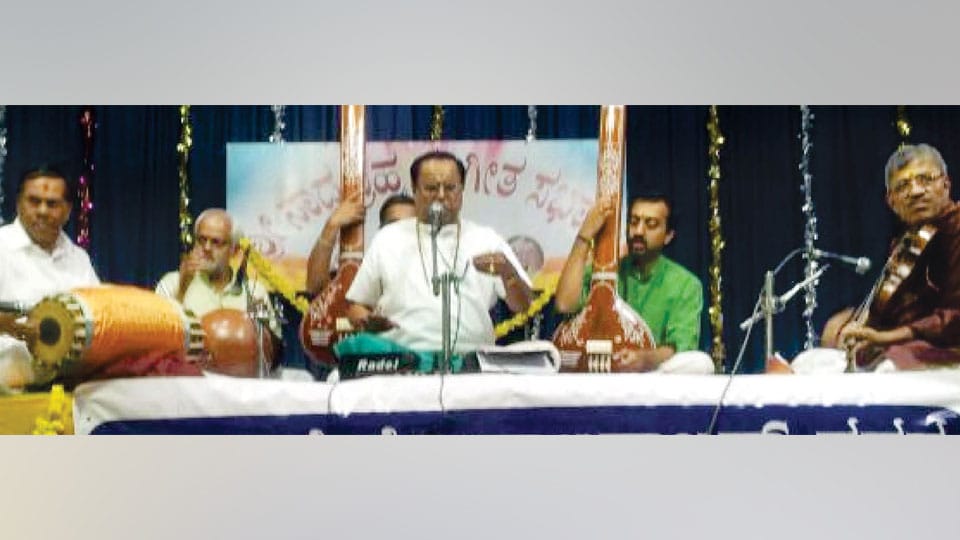 Nadabrahma Sangeetha Sabha, Mysuru, has cultivated the practice of honouring a senior musician with the title ‘Nadabrahma’ every year in the month of January. In the search to recognise young talents it also conducts ‘Nadakishorotsava’ and the winner is entitled for the title ‘Nadakishora’ or ‘Nadakishori’ on the occasion.

This year, senior vocalist R.K. Padmanabha was chosen for the ‘Nadabrahma’ title. Shreya Kolattaya from Puttur was the winner of ‘Nadakishorotsava’ and was conferred the title ‘Nadakishori’ on the 6th of January.  As is the practice, she also presented a Karnatak concert on the previous day.

The honouring ceremony was followed by the concert by R.K. Padmanabha (RKP). He was accompanied by C.N. Chandrashekhar on violin, Cheluvaraju on mridanga and G.S. Ramanujam on ghata.

R.K. Padmanabha is known for his voice and his unflinching enthusiasm. His vibrant voice which traverses fluently in all the ranges keeps the audience captivating throughout his concert. Age seems to be only a number to this musician.

In the present concert, Padmanabha presented a variety of compositions. Keeping with the tradition of presenting the RTP in the same raga as the Varna, he commenced the concert with his own varna in Brindavana Saranga set to Adi tala.

‘Abhimanamennadu’ by Patnam Subramanya Iyer in Begade was prefixed by a short alapana and elaborate swaras to the pallavi portion.

RKP likes to converse during his concerts. He spoke of the approach to the kriti ‘Bhajare Manasa Sri Raghuveeram’ by Mysore Vasudevachar in comparison with Tyagaraja’s ‘Nagumomu’ and explained the mood of the raga in both the compositions.

‘Vishweshwar dashan kar chalo man tum kashi’ in Sindhu Bhairavi, normally taken up in concerts in the post-tani part, was surprisingly taken in the middle of the concert and swaras too were developed for the pallavi.

An ardent devotee of Saint Vadiraja, RKP always makes it a point to render at least one of his devaranamas in every concert. This time he presented ‘Gopala Kaheya Neenu’ in Poorvikalyani, which was also prefixed with the ugaboga ‘Bagilali Biddiha Bhajakanu Naanu.’

The pallavi was special, set to Mishra Jhampe in two different kalais. The laghu part was in two kalais while the Dhruta part was in a single kalai. It was to this complicated tala that the percussionists had to provide taniyavartanam, which they happily did bringing joy to both the main artiste and the audience.

The sahitya of the pallavi was set in praise of the Nadabrahma Sangeetha Sabha and of course it was composed by the vocalist. The kalpana swaras were also challenging as ragas close to Brindavana Saranga were chosen — Madhyamavati and Sri, which, if not alert, could easily mislead one back to the original. The adept vocalist excelled here with his concentration, experience and mastery. Manirang could also have been chosen             in the series. A shloka on Goddess Sharada led to ‘Shringapuradheeshwari Sharade’ (RKP) in Yamuna Kalyani, which beautifully suits the composition.