Home » Feature Articles » A Dewan too built an Agrahara 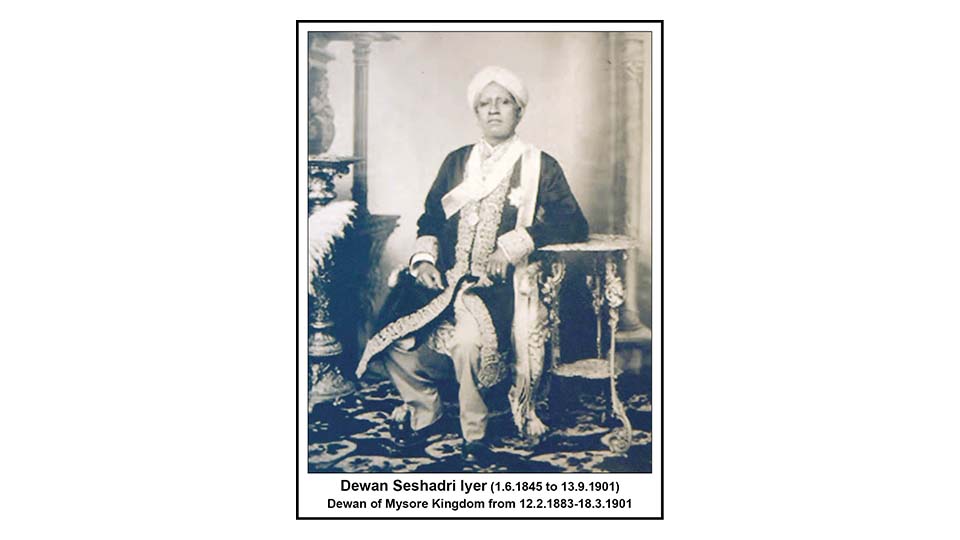 A Dewan too built an Agrahara

Mysuru: A Look at its Past… By Gouri Satya, Sr. Journalist

Not only the Maharajas and the benevolent ones, but even a Dewan also built an Agrahara in Mysore during the days of the Wadiyars. We have streets and roads built by the Dewans or named after them. But no Dewan has built an Agrahara except this Dewan, which is also named after him. However, the Agrahara built by him had only a few houses, unlike most of the other Agraharas in Mysore.

After Mysore became the residential city of the Wadiyars in 1799, the city began to witness expansion suiting the increase. The work of providing houses for those who migrated to the royal city, attracted by the support and encouragement given by the King, had commenced during the reign of Krishnaraja Wadiyar III alone. New Agraharas came up during his reign, as he and his queens took it up as an act of charity. Gradually, Mysore had begun to see the happier days, people settling down under the patronage of a   benign Maharaja.

A traditional city of small size began to take a turn towards modernity. In this task, two competent Dewans, Rangacharlu (1881-1883) and Seshadri Iyer (1883-1901) ably assisted the Maharaja, playing a significant role in bringing about reforms in administration and initiating schemes and projects that laid the foundation for a progressive State.

The construction of the Railway line linking Bangalore with Mysore was one such major achievement. It had been taken up as 1877-78 famine-relief work. It was commissioned in 1882 when Rangacharlu was the Dewan. It provided connectivity up to Madras, the present Chennai. Chennai-Bangalore Railway line was already existing by then. The new Railway line gave a boost to the economic growth of the State.

Rangacharlu, who had brought about many reforms in administration and improved the finances of the State, had proposed to extend the Railway line up to Tiptur. However, he was not destined to live long enough to carry out his ideas. He was taken ill and died at Madras (Chennai) in December 1882. Dewan Rangacharlu was succeeded by Seshadri Iyer. The Railway link to Tiptur became a reality during Dewan Seshadri Iyer’s period.

READ ALSO  An Agrahara by a Palace Astrologer

Seshadri Iyer served the State for 18 long years and was the second longest serving Dewan next to Dewan Purniah. He was Dewan to Chamaraja Wadiyar till the Maharaja’s premature death in 1894 and continued during the Regency of Vani Vilasa Sannidhana Kempananjammanni as Nalwadi Krishnaraja Wadiyar was still a minor. Seshadri Iyer retired in 1901, before the termination of the Regency and installation of Nalwadi in 1902, and passed away soon after. During his period, the Kingdom saw progress in different directions including transport, irrigation, mining and electric power.

Kumarapuram Seshadri Iyer was born on June 1, 1845, in a Tamil-speaking family at Kumarapuram, near Palghat, in the present Kerala State then in Madras State. His parents were Ananthanarayanan Iyer and Venkatalakshamma. After his early education in Kozhikode (Calicut), he graduated from the Presidency College in Chennai. He had begun his official life in 1866 as a Translator in the Collector’s Office in his native town of Calicut in the Madras Presidency.

There being need in Mysore for the services of capable English-knowing men, Seshadri Iyer, at the suggestion of Rangacharlu, was appointed Judicial Sheristadar in the Superintendent’s office at Mysore, which he joined on 30th October 1868. With this, he entered the services in the Mysore kingdom. After he took the E.L. Degree of the Madras University in 1874, he was appointed Deputy Commissioner and District Magistrate of one of the districts in 1879, and from August 1881 he was placed on special duty in the Dewan’s office under Rangacharlu.

Seshadri Iyer entered upon his new duties as Dewan with great earnestness and wisdom and proved himself a man of undoubted talents. He set right the disorganised finances of the State and plugged the deficit. The finances needed to be set right first for improving the efficiency of the administration. Realising that agriculture was mainly dependent on tanks which were in a bad shape, a new Public Works Division was formed. The improvement in irrigation and restoration of tanks and river channels was entrusted to it.

In 1900, he initiated the first hydroelectric project in Asia at Sivasamudra to harness the waters of the Cauvery falls. But unfortunately, he could not be a witness to its commissioning in 1902. The ill health compelled him to retire and his end came soon after in 1901.

The completion of the power scheme and transmission of power to the Kolar Gold Fields (KGF) for the first time, drawing the longest transmission line in the world at that time, was hailed as “Thus one of the greatest and most recent developments of modern science was successfully carried out in Mysore and to the Maharani-Regent and her advisers belonged the credit of carrying out this                                        bold enterprise.”

During Seshadri Iyer’s administration, a number of works to put Bangalore on modern lines were initiated. In order to decongest the thickly crowded areas which frequently saw the outbreak of the dreaded plague in Bangalore, the visionary Administrator and Statesman developed Basavanagudi and Malleswaram to rehabilitate those who had lost their houses. This brought in new industries and businesses boosting the prosperity of Bangalore. As a result of the various initiatives undertaken by him, Seshadri Iyer became popular as the “Maker of Modern Bangalore.”

Besides the construction of the Marikanave dam in the arid district of Chitradurga and the reconstruction of the fire-destroyed Palace, a number of other useful measures were initiated during the tenure of Seshadri Iyer. In all these, he had a major role to play as Dewan.

Dewan Sir K. Seshadri Iyer, a man who was responsible for making Mysore a modern kingdom with many achievements to his credit, has left permanent landmarks in his memory. He “possessed a powerful intellect and a strenuous will. During his long period of office, he rendered various useful services to the country of his adoption and achieved distinction as a Statesman of Indian repute.”

Later, a statue was raised and a building known as the Seshadri Iyer Memorial Hall in Cubbon Park at Bangalore to commemorate his services was constructed. Today, it houses the Bangalore Central Library, his statue standing in front of it.

The Dewan’s Agrahara today has come to be popularly called ‘Dewan’s Road’, while its original name was ‘Sir Seshadri Iyer Road’. It stretches from Kantharaj Urs Road to Bannimantap Road, near the Bamboo Bazar area. On this road stands the historic ‘Kumara Bhavana’ where he resided when he was serving the State. The Offices of the Commercial Taxes are accommodated in this heritage building now.