Home » Feature Articles » A Family in a Temple 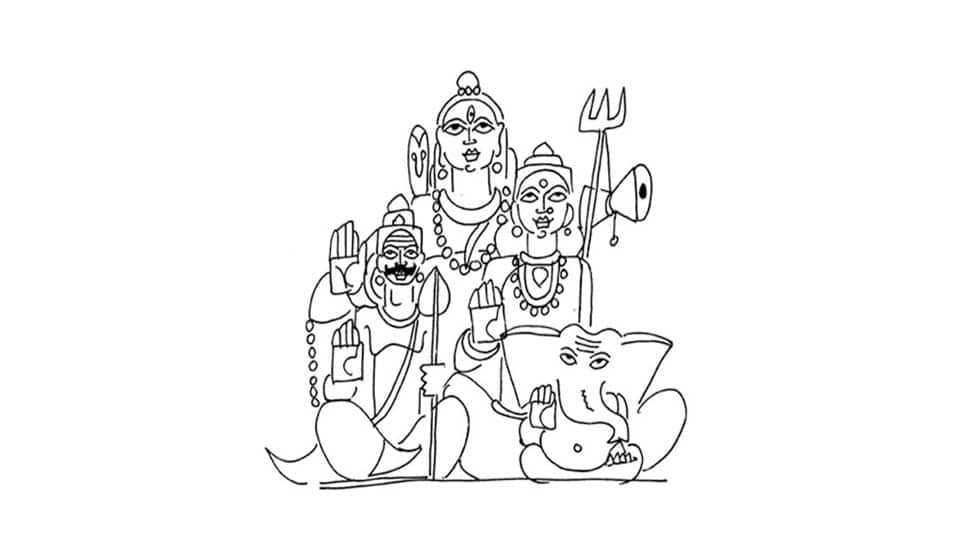 A Family in a Temple

In a typical Hindu temple, we do not find just one image. We find multiple images. For many people, unfamiliar with Hindu tradition, this looks like polytheism. But for Hindus, these are various manifestations or expressions of the same divine principle, different facets of divinity expressed through a family unit. We see this at Shiva, Vishnu and Devi temples.

Shaivism deals with the hermit, Shiva, who becomes a householder. We always see the image of the hermit with his wife and two sons: Karthikeya, who makes us feel secure, and Ganesha, who nourishes us. So, our mundane needs — hunger and fear — are taken care of by the two sons of Shiva. The parents, Shiva and Shakti, represent more transcendental ideas of mind and body, or spirit and substance, purusha and prakriti. That is the Shiv Parivar. Before them is the Nandi bull and sometimes, Brahma, or Vishnu, in the form of a turtle.

Vaishnavism entails the worship of Lakshmi and Vishnu, particularly in South India. Vishnu is visualised either reclining Vishnu as in the Padmanabhaswamy temple of Kerala or Srirangam temples of Tamil Nadu, standing Vishnu with four arms as in Tirupati Devasthanam of Andhra. Lakshmi is worshipped alongside Vishnu but the image of Lakshmi is typically located in a separate shrine, thus establishing her autonomy, different from Shiva temples where the Goddess is paced symbolically around Shiva-linga as the yoni-trough, or her image stands on the side within the shrine.

Swami Narayan temples of Gujarat and Rajasthan are unique as they — Vishnu and Lakshmi — are worshipped together. We don’t find any children of Vishnu in any Vishnu temple. Strange for a householder God, if one thinks about it. Around them instead are Garuda, Vishnu’s mount, and maybe devotees like Narada and door-keepers like Jaya and Vijaya.

More commonly, Vishnu is worshipped in his mortal forms, Ram and Krishna. Ram is worshipped with his wife, Sita and sometimes they are accompanied by Hanuman, who serves them and Ram’s brother, Lakshman. Krishna is often worshiped with his beloved, Radha. This is a little awkward because, for most people, the male and female form have to represent husband and wife. While this is true with Shiva and Parvati, and true with Ram and Sita, it is not true with Krishna and Radha. Radha emerges with the tantric traditions. Radha has a different husband and often people don’t talk about it to avoid awkward explanations. Krishna and Radha are seen as transcendental husband and wife, for many. But in the tantric sense, their union represents a relationship which is not defined by custom, convention or by law. Unlike Shiva and Ram, who are seen as husbands, Krishna is seen as a beloved. Vishnu again is seen as a husband with Lakshmi by his side.

Devi or the Goddess is never shown with a consort or a husband by her side. She is shown as an independent, autonomous person. In traditional shrines, she is sometimes accompanied by a female companion as in Chamunda-Chotila shrines of Gujarat or Nanda-Sunanda shrines of Uttarakhand. Or, she is flanked by two males who are described as her sons, Bhairava or Hanuman, or Kala-Bhairav and Gora-Bhairva. She is often shown riding a tiger or a lion with multiple weapons in her hand. Although she is dressed as a bride, she holds weapons. The bride represents the fertility aspect of the Goddess and the weapons represent her protective side. Her male guardian-sons reinforces her autonomy.

Decoding Mythology Dr. Devdutt Pattanaik
Extension of Work From Home for ITians till July 31: A welcome move
International Astronomy Day on May 2