Home » News » A. Manju to contest as BJP candidate from Hassan? 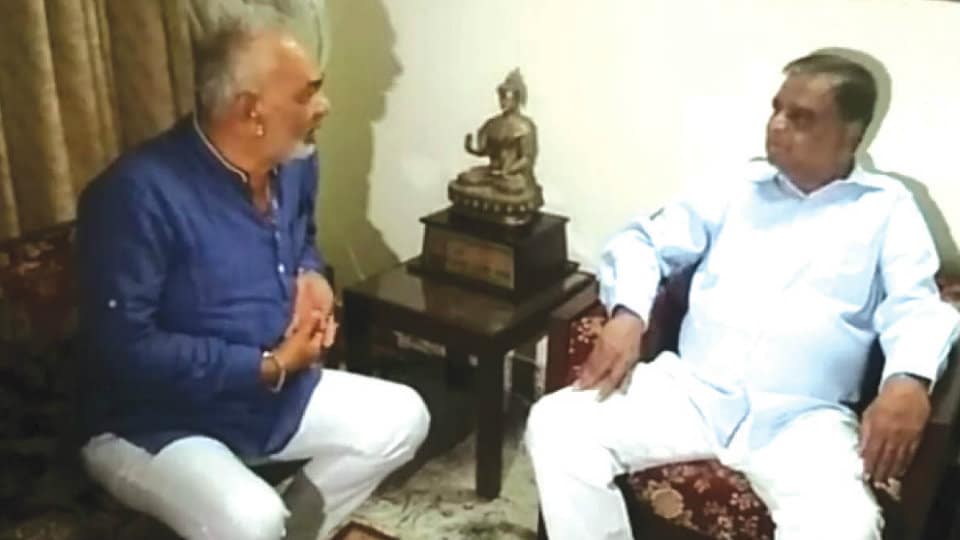 A. Manju to contest as BJP candidate from Hassan?

Mysuru: In an interesting development, Congress leader A. Manju, who is up in arms against the JD(S), met senior BJP leader V. Sreenivasa Prasad at the latter’s residence in Jayalakshmipuram here on Saturday.

Manju held discussions with Sreenivasa Prasad for more than an hour. It is said that Manju met Prasad to seek his support to contest as the BJP candidate from Hassan Lok  Sabha seat, where Prajwal Revanna, son of PWD Minister H.D. Revanna is almost certain to contest as the JD(S) candidate. Manju, however said it was a courtesy call on his political guru Prasad.

Meanwhile, sources said that Manju expressed his willingness to contest from Hassan on a BJP ticket if JD(S) supremo and former Prime Minister H.D. Deve Gowda opts out in favour of his grandson Prajwal Revanna or anybody else.

Manju who contested on a Congress ticket from Hassan, lost to H.D. Deve Gowda in the 2014 Lok Sabha polls. Both BJP MLAs of the city S.A. Ramdas of K.R. and L. Nagendra of Chamaraja were not aware of the meeting and no other leader was present during the meeting, it is learnt.

Speaking about the meeting, Sreenivasa Prasad said A. Manju was his friend since 1983 and he has great respect for him.

Maintaining that Manju called on him while he was en-route to his hometown Arakalgud in Hassan district, Prasad said it was only a courtesy call.

Pointing out that it was natural for politicians to talk about politics when they meet, the senior BJP leader said it was imperative for the BJP to put up a strong candidate against Prajwal Revanna.

Claiming that the two did not discuss about Manju’s chances of becoming the BJP candidate from Hassan, Prasad said he believes Manju may have held talks with senior BJP leaders in this regard.

‘Ambarish body was brought to Mandya by CM for political gain

Earlier in the day, Manju who visited Mandya, alleged that bringing of actor turned politician Ambarish’s body to Mandya had a hidden political agenda and that has been proven now.

Speaking to media persons at Mandya, Manju said that the JD(S) had benefited from late Ambarish and is now attacking him and his family for political gains.

Stating that the people of Mandya should exhibit their self respect by electing a local candidate instead of electing Nikhil Kumaraswamy, an outsider, Manju lashed out at the Legislators from Mandya for backing family politics and distributing the tickets of Nikhil’s movie.