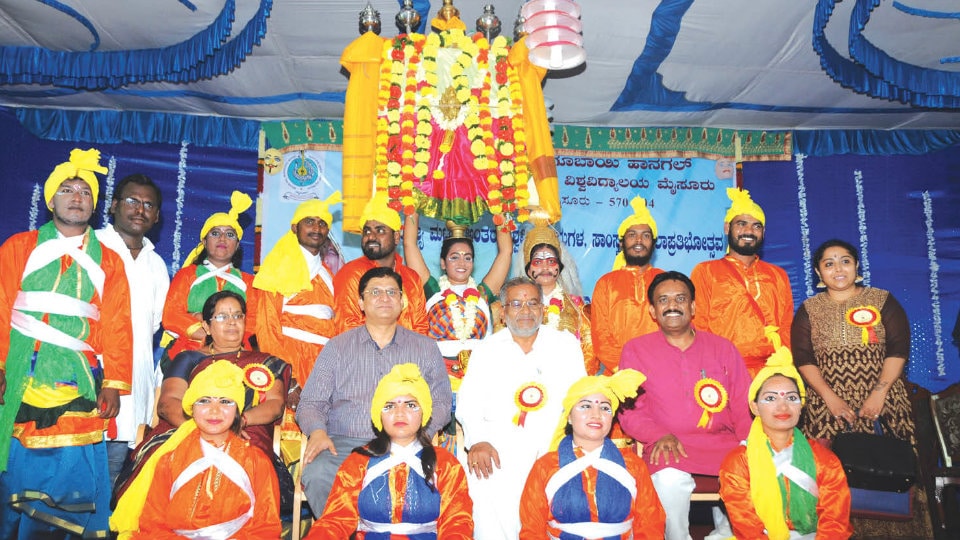 Rs.4.90 crore for development of Music Varsity in city: GTD

Mysuru: Higher Education Minister G.T. Devegowda (GTD) announced that he is ready to sanction Rs.4.90 crore for the development of Karnataka State Dr. Gangubai Hangal Music and Performing Arts University at Lakshmipuram in city where new buildings will be constructed and all modern facilities provided.

He was speaking after inaugurating the State-level Inter-University Cultural and Arts Talents Fest at the Music University premises in Lakshmipuram here recently, organised as part of Dr. Gangubai Hangal’s 106th birth anniversary celebrations.

All that the University students need is encouragement and hence, all the facilities required for studying music and performing arts will be provided. A beautifully designed unique building, library, practice room and other facilities will be given, he said.

Dr. Gangubai Hangal was born in Karnataka and took music to great heights in the world. She had sung the welcome song at the Congress Convention in Belagavi and won everybody’s hearts. It is very laudable that a Cultural and Arts Talents Fest has been organised on her birth anniversary. The students from different Universities participated and exhibited their talents. The students should follow the footsteps of Dr. Hangal and renowned signer Pandit Vinayak Toravi, the Minister said.

Our hut is better than someone else’s Palace: “The students had submitted memorandums stating that they are facing a lot of problems. Later, they were provided facilities at the premises of KSOU Academic Bhavan near Mandakalli. However, I am very happy that you returned to this place. Instead of somebody’s Palace, our hut is any day better. The In-charge Vice-Chancellor is doing very good work and it should continue. The University should grow to international level,” said GTD.

Students win hearts with their talents: The students who had come from different Universities won the hearts of the connoisseurs with the folk (Janapada) songs and dances. While the SJMVS College students danced to the tune of folk songs, the students of Akkamahadevi University College danced with great gusto to the tunes of Rajasthani folk songs inviting whistles and claps from the audience.