Home » Feature Articles » A Meaningful Tribute to a Great Guru 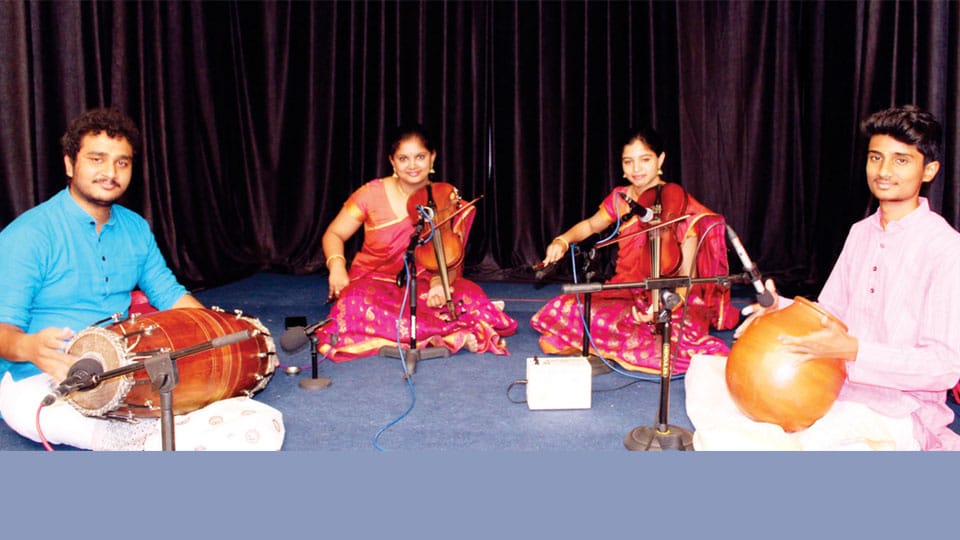 A Meaningful Tribute to a Great Guru

The ninth concert under the online music programme ‘Yuva Sangeetha Sambhrama-2020’ of Sri Thyagaraja Sangeetha Sabha Charitable Trust was a violin duet, premièred on 3rd January on the YouTube channel of the Sabha.

The concert was presented by Vidu. Prithvi Bhaskar and Vidu. C.V. Shruthi, which was dedicated to M.S. Gopalakrishnan, popularly known as ‘MSG’, the torch bearer of Parur Bani and a violin maestro, on the occasion of his seventh death anniversary.

Prithvi and Shruthi are upcoming artistes of Mysuru, groomed by Vid. H.K. Narasimhamurthy, a popular violinist and a senior disciple of MSG. Having enriched their experiences by accompanying many senior as well as upcoming artistes on several reputed platforms and being talented vocalists themselves, the duo has gained admiration of music lovers.

They started their concert with a composition of Thiruvottiyur Thyagayyar, ‘Saami Dayajoodaraa’ (Kedaragowla – Adi) and then made a neat presentation of a small composition of Thyagaraja, ‘Eesha Paahimaam’ (Kalyani – Rupaka). The next item selected was one of MSG’s favourites, ‘Manavyaalakim’  (Nalinakanthi – Adi).

While Shruthi unfurled Kalyani raga gracefully, Nalinakanthi blossomed elegantly in the hands of Prithvi. Ornamenting both the kritis with splendid kalpanaswaras, they took up Thyagaraja’s ‘Kaddunuvariki’ (Thodi – Adi) for the next presentation. This kriti in vilambagathi, journeyed exquisitely well in all aspects with their accomplished manodharma.

While the mastery in the bowing technique of MSG school was vibrantly evident throughout the concert, the attractive display of skills on mridanga and ghata by young percussion talents, Vid. Nandan Kashyap and Vid. Shamith S. Gowda complimented the concert ably.

The concert was indeed a befitting tribute to the visionary maestro and eminent teacher MSG, by devoted budding violinists of the same bani, groomed by an ardent disciple of MSG.

The tenth concert under the series, a vocal duet by Vidu. Vipanchee Raghuram and Vidu. Mahatee Raghuram was premièred on 9th January. The siblings hail from a family of musicians and are the granddaughters of popular flautist Vid. V. Deshikachar and disciples of senior musician Vidu. Dr. R.N. Sreelatha.

The concert began with Muthuswami Dikshitar’s ‘Parameshwara Pahimam’ (Nata – Adi). Vipanchee then presented an enthralling alapana of raga Ranjani, which was followed by Thyagaraja’s ‘Durmargachara’ set to Rupakatala, elegantly with kalpanaswaras, rendered by both of them.

Elaborate ragalapana, neraval at ‘Kapata Nataka Sutradhari vai’ and artistic portraying of kalpanaswaras demonstrating the matured manodharma were the highlights of this rendition within the compact frame-work of Bhairavi.

Vid. Keshav Mohankumar also exhibited similar maturity on violin. The concert concluded with a javali of Tanjavur Chinnayya, ‘Nenetlu Sahinthune’ (Faraz – Adi). Vid. Pavan Madhav Masur on mridanga and Vid. Shamith S. Gowda on ghata contributed to the success of the concert with able as well as supportive following and attractive thani, which complimented the manodharma of the singers.