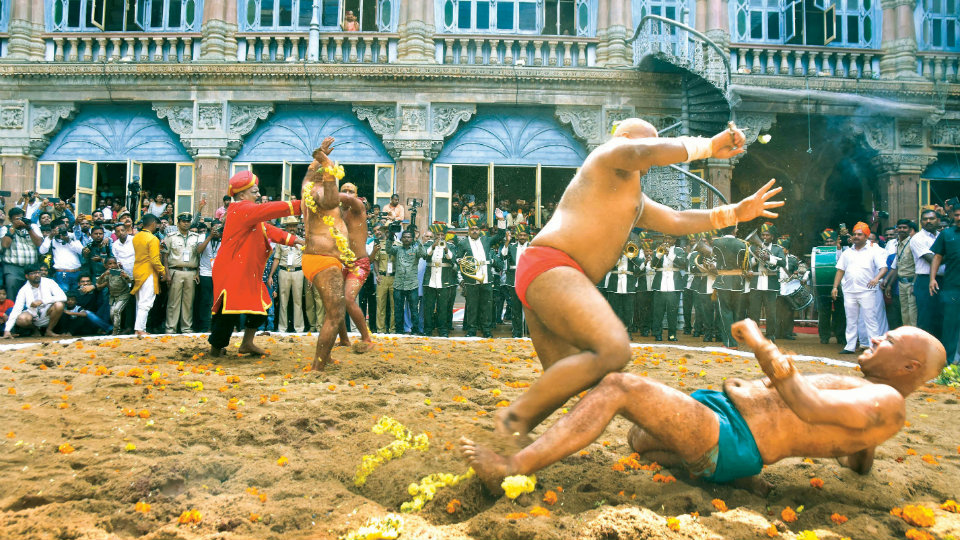 Vajra Mushti Kalaga, an extinct form of wrestling came alive during Vijayadashami celebrations at Mysore Palace last morning with the fight between Balarama Jatti of Mysuru and Narasimha Jatti of Channapatna and between Girish Jatti of Chamarajanagar and Narayana Jatti from Bengaluru.

The event was held at Karikallu Thotti in front of the Kalyana Mantap of Mysore Palace and was organised with all its traditional fervour and as per the age-old customs. The ritual heralded the Dasara procession. The tradition has it that when two Jattis wearing the Vajra Mushti wrestle and the moment the blood is drawn on the head of one of the wrestlers, it signals the start of Dasara procession, later on that day.

Wrestlers, with shaved heads and wearing knuckledusters with spikes, engage their respective combatants in the duel. The knuckledusters, made of metal and ivory, are in the possession of the royal family. They are offered a puja before they are given to the wrestlers.

The wrestlers, while evading the assault with one arm, try to heave blows on the opponent’s shaven head with the other hand bearing the knuckleduster. The duel ends with the draw of first blood from one of the wrestlers.

Yesterday’s bout took place at 10.20 am in front of a large audience who had gathered to watch the rare annual event. Before the event, the two pairs of Jattis assembled at the special Akhada made of red soil and waited for the signal from the royal family for the sport.

At 10.20 am, scion of Mysore royal family Yaduveer Krishnadatta Chamaraja Wadiyar performed the Koosmanda and Uthara Puja at Kalyana Thotti and signalled the start of the Vajra Mushti Kalaga. The Jattis performed pujas to Kuladevi Nimbujamba and began the fight.

Side-by-side was the bout between Girish Jatti and Narayana Jatti. They went on with the fight despite the truce call by Jasbandis (referees). They even fought outside the Akhada, breaking the rules. This led to a minor scuffle between supporters of the wrestlers.

As per rules, there must not be any fight if one of the fighters goes beyond the circular Akhada. Despite this, Girish Jatti hit Narayana Jatti a couple of times though the latter was outside the Akhada. Jasbandis Srinivas Jatti and Tiger Balaji intervened and separated the warring fighters and declared that the fight has ended in a draw.

Both the bouts ended within 30 seconds. Later, the Jattis came out of the Akhada and saluted Yaduveer who greeted the Jattis. Madhava Jatti of Mysuru, Chennakutti Jatti of Chamarajanagar, Purushotham of Channapatna and Krishna Jatti of Bengaluru performed the role of Ustads.