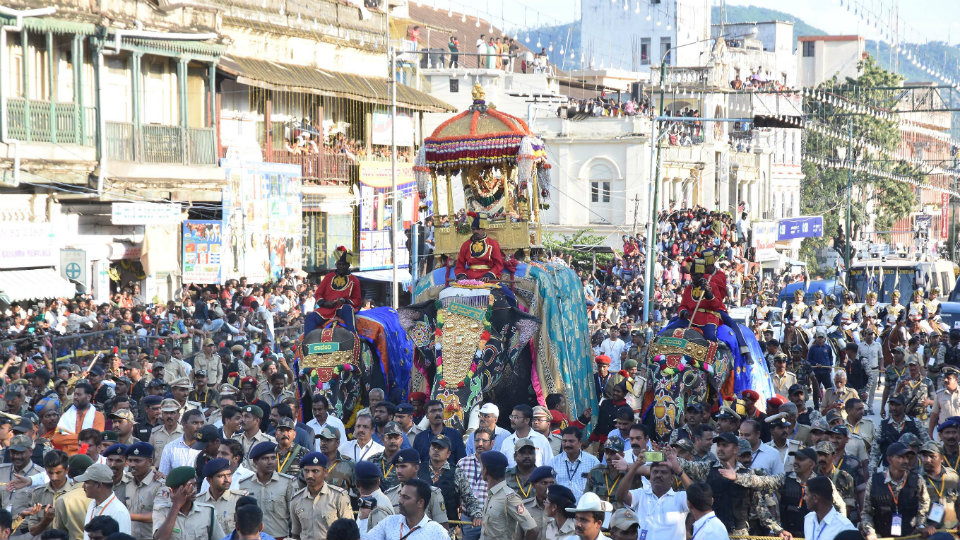 Mysuru: With the 10-day Dasara (Nada Habba) coming to a close yesterday tourists, who had flocked the city for the grand event, have begun to leave Mysuru carrying Dasara memories.

The Chamundi Hill, which was flooded by tourists and devotees for Vijayadashami yesterday, wore a different look with lesser crowd this morning.  The devotees who visited Sri Chamundeshwari Temple atop the hill today were mostly tourists and families of Police personnel from other districts who were deployed for Dasara duty.

Mysuru Zoo: Mysuru Zoo recorded a footfall of 4,500 tourists by 11 am this morning. Long queues of visitors were seen outside Sri Chamarajendra Zoological Garden waiting for their turn to purchase tickets.

However, the scene was different at Karanji Lake as only 150 tourists had visited the tourist spot by 11 am today. The number may rise drastically by evening as Dasara revellers are expected to arrive after visiting other tourist spots in and around city.

Meanwhile, the 11-day Dasara Flower Show organised at Kuppanna Park in Nazarbad will conclude tonight. A big hit among tourists, it is attracting a large crowd right ever since the gates were opened at 9 am today. Hordes of visitors were seen lined up before the ticket counters.

Mysore Palace: Mysore Palace is witnessing a large number of tourists, including foreigners since morning. The visitors were allowed to watch the Dasara elephants which took part in yesterday’s Jumboo Savari. However, as a safety measure they were restricted from watching Dasara elephants from close quarters.

Even as a tiger in Bandipur Tiger Reserve mauled a farmer to death at Chowdahalli in Gundlupet taluk yesterday, the Forest Department officials have roped in three Dasara elephants – Balarama, Gopalaswamy and Abhimanyu – for the combing operation to capture the elusive feline. These three elephants will leave for Bandipur this afternoon, it is learnt.