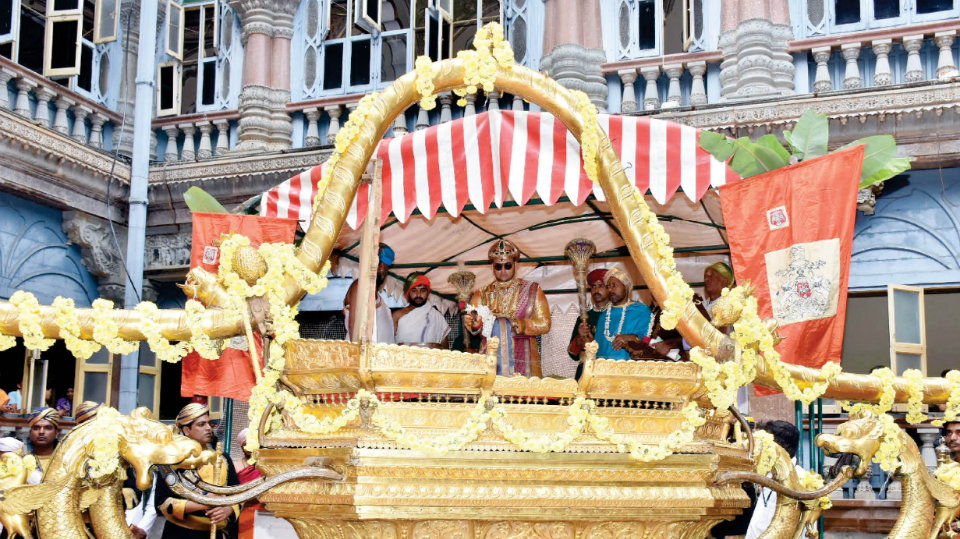 Mysuru: On the ninth day of Navaratri, known as Mahanavami, scion of Mysore royal family Yaduveer Krishnadatta Chamaraja Wadiyar performed Ayudha Puja by worshipping the Royal Sword (Pattada Kathi) among other weapons at the Palace on Monday.

Yaduveer, dressed in Royal costumes and wearing jewellery, worshipped the weapons and emblems as well as palanquins, chariots and personal vehicles during the rituals which began from 6.15 am.

At 6.45 am, Royal Elephant Vikram, Saalaane Gopi, Palace Elephants Sita, Ruby, Chanchala and Preethi, Royal Cow, Royal Horse, Camel, Royal Sword and other weapons were brought Aane Savari Gate from where they were taken to Kodi Someshwara Temple where pujas was performed to Kodi Someshwara and Kodi Bhairava Swamy. Pujas were also performed to the well and the Kalasha.

Women carrying Kalashas along with royal elephant, horse, cow, camel and weapons were brought to Aane Savari Gate. The animals were received by palace Purohit and taken to the Kalyana Mantap inside the Palace.

At 9.30 am, the elephant, cow and the horse were brought to Savari Thotti and as soon as the Seer of Parakala Mutt Sri Swatantra Abhinava Vageesha Swamiji, who is the Palace Rajaguru, arrived. Pramoda Devi Wadiyar, Yaduveer and his wife Trishikha Kumari Wadiyar received the Rajaguru and performed Padapuja.

Yaduveer held the private Durbar in the evening and the figurines of lions were detached from the gems-studded Golden Throne. Following this, Yaduveer and Trishikha performed certain rituals and the sacred Kankana were removed from their wrists. Rituals went on till late night.