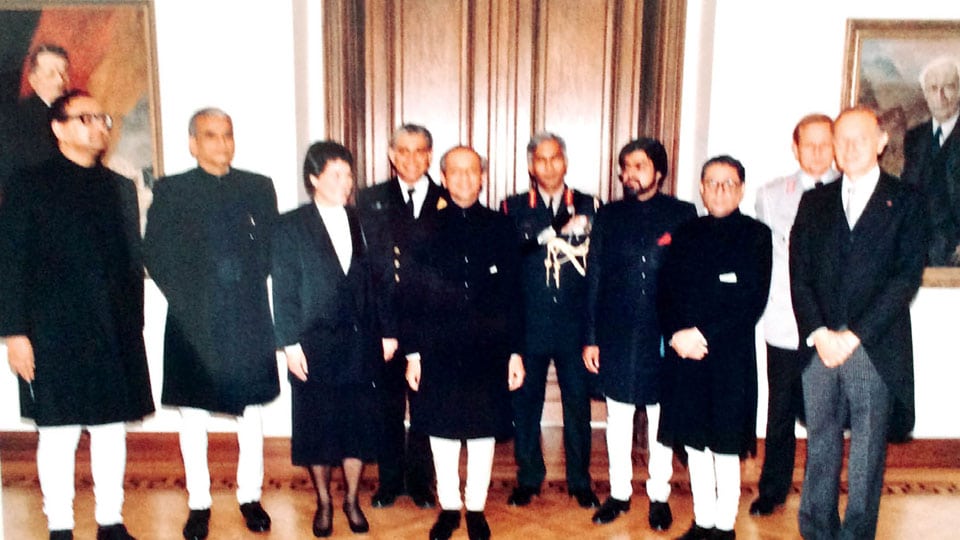 A new home in Bad Godesberg

Settling into a new home was always a challenge to a Mysurean like myself, though I had lived in several foreign countries over the years. It was no different when I went to Bad Godesberg, Bonn, West Germany, when my husband, A. Madhavan, was posted as Ambassador to FRG (the Federal Republic of Germany) from 1988 to 1991. We witnessed a historical event during this tenure; the re-unification of East and West Germany. Madhavan found himself envoy to a larger country when FRG and GDR (the German Democratic Republic) merged into one.

I had earlier memories of the country when my husband and I, with our infant son, had gone camping there in 1962, through the Black Forest (the Swartz Wald) ending up in Bonn. We visited Jagat Singh Mehta and his wife Rama Mehta, posted in Germany then, in their home in Konigswinter. A distinguished Indian diplomat, he retired as Foreign Secretary. Their sitting room windows opened on to a view of the Rhine where river craft plied. One wall was covered with a vivid Phad (a Rajasthani tapestry based on a folk legend). Indian miniatures glowed gem-like on the opposite wall; a home showcasing Indian art to foreigners.

Bonn was quiet and laid back then. By the late 1980s, a variety of nationalities added colour to the scene; Slavs, Arabs, Turkish people, Iranians, Filipinos and Indians.

Within two weeks of our arrival, Shankar Dayal Sharma, the Vice-President, was to make an official visit. So the first priority was the Presentation of Credentials by Madhavan to President Richard von Weizsacker, formally taking charge as Ambassador.

READ ALSO  A Glimpse of the Geisha World

I was not invited to the Credentials ceremony. Instead, I waited at home for my husband, our own Embassy officials and those of the German Foreign Office to return to our home for a celebratory reception with champagne. The corks were given to me as a souvenir.

We received the Vice-President and party at Frankfurt Airport. Among the dignitaries who disembarked, a smiling face came into view; a well-known Mysurean, Professor C.D. Narasimhaiah. He was a family friend and my mentor too. He recalled how he had been reading a book of poems by Madhavan when I went to invite him to our wedding.

Events at Dhvanyaloka, the cultural centre he started, were highlights for us when we returned to Mysuru after retirement.

We settled into our new life getting acquainted with other diplomats and our counterparts in the Auswartiges Amt (German Foreign Office). I had to adapt to unfamiliar surroundings. I found shops that catered to our needs. The  Arab shop had the best green coriander and fresh, tender little bindis; the Turkish one had good cinnamon and aromatics. The Indian store stocked precious curry leaves, pickles and staples.

In the Residence, Villa Marienforst, the “German” gardener had let weeds grow in the flower beds, the grass needed mowing. Why was he retained, I wondered. The answer was apparent after I met him; Kartar Singh, a burly, cheerful Punjabi with a charming gap-toothed smile. He had immigrated to Germany many years ago and was married to a German woman. He made delicious samosas, a spicy stuffing within a crisp but delicate pastry. He could make large numbers of these for parties. What were a few weeds in the face of such talent. Khem Singh,  our Garhwali help, was delighted with him too as Kartar Singh promised to cook venison for him when the hunting season started. Hunting in Germany is strictly regulated, month, date and species wise. Red, fallow and roe deer (bucks, does and fawns are included too), chamois, wild boar, hare, and game bird are among the many other animals for huntsmen to kill.

Virgie, the Filipino help, specialised in cocktail spring rolls. With ready-made spring roll wrappers from a Filipino source she made an aromatic filling of bean sprouts, scallions, chicken and shrimps, seasoned with soy sauce. We all helped to form and seal the rolls. They were extremely well liked. This was my support team for entertaining; I was designated as “Official Hostess” in addition to being the Ambassador’s wife!

We formed friendships with international community and colleagues from diverse countries meeting German officials and intellectuals as well as some political personages; people who were affluent and successful. I also interacted with immigrants like Virgie and Kartar Singh, who faced insecurity, financial, cultural and linguistic challenges in their country of adoption. From them I saw another side of life, their struggle and fortitude, facing life and its vicissitudes with a smile.