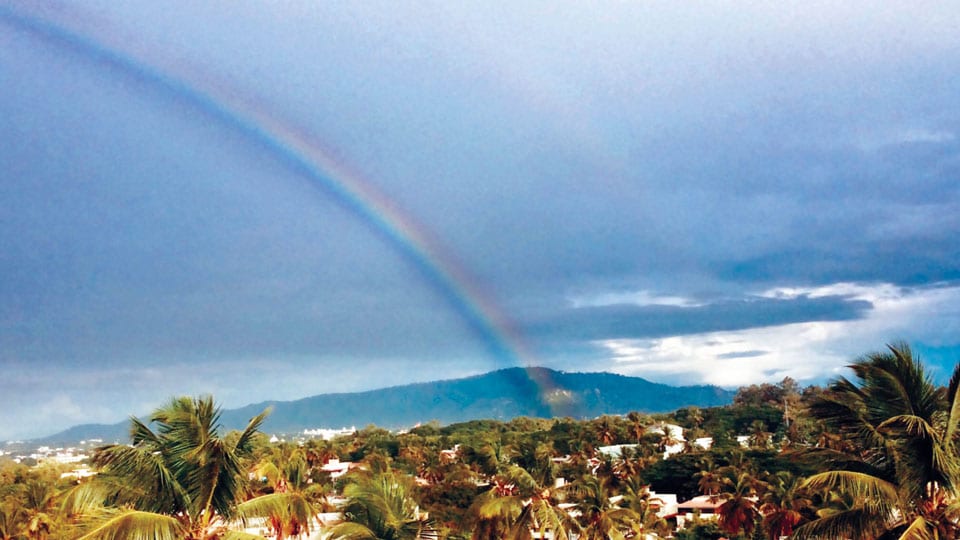 Dancing on the Rainbow

Seeing a rainbow over Chamundi Hill recently, an old Burmese film song, “Dancing on the Rainbow,” came to mind awakening  memories of “Burma” [now Myanmar], where I lived from 1959 to1961. My husband, A. Madhavan, was posted to the Indian Embassy in Rangoon. It was my first experience as an Indian Foreign Service wife, my first time out of my hometown, Mysore, now Mysuru. I celebrated my 21st birthday in Rangoon, now Yangon.

The journey to Rangoon was accomplished in several stages. First we travelled from Mysore to Bangalore by a narrow gauge steam engine train [the gauge defined by the distance between the twin tracks]. The upholstery was stamped with “MSR” [Mysore State Railways] later changed to “Southern Railways.” Steam engines would puff along the railway track on the periphery of Yadavagiri, past  hutments, the cremation ground dense with trees, towards Srirangapatna; the whistle fading away as the train disappeared into the distance.

A metre gauge train took us from Bangalore to Madras Central Station. The onward journey was by air; in a twin-propeller Dakota plane, with roaring motors, to Nagpur. Before take off the stewardess offered us cotton wool to put in our ears and peppermints to suck for blocked ears. At Nagpur, we disembarked and walked to the airport holding pink slips given to us to claim coffee and snacks at the cafeteria there. I have flown in many planes and even a helicopter since, but that first-ever plane ride was the most exciting of all.

Dakotas were used in the Indo-Pak conflict of 1947-48. A refurbished DC-3 Dakota, named “Parashurama”, with the same tail number [VP 905] as the one that performed heroically during the Indo-Pak hostilities of 1947-48, joined the IAF vintage fleet a couple of years ago.

A Skymaster with four propellers took us from Nagpur to Calcutta; finally, a gently humming Viscount to Mingaladon Airport in Rangoon. My husband and I were met by Embassy officials and rode to our new home in a wheezy Microbus. The driver was Muhammad who lived in a wood and bamboo house on stilts behind the house we were to occupy. Our house, made of teak, was one of a row of middle class homes on a lane that ended in a cul de sac bounded by a Railway line on which trains regularly passed. Opposite was a clutch of poorer homes; the sights, sounds and strong smells were new. From the village, the radio blared traditional Burmese music, alien to my ears, or film songs.

The Indian Embassy was located in Merchant Street, about six miles from our home. My husband would leave for work in our silver Volkswagen Beetle, our dearest possession; and the lonely day stretched ahead. The whistle from the trains passing by reminded me of Yadavagiri.

Then I became friends with Taj Bibi, the daughter of the Embassy driver Muhammad. Unmarried, she was a little older than I was and could speak some Hindi. She was from “Chittagong-way.” Thinking back, I wondered if she was a Rohingya but realised she and her family came under an old category of “Burmese Muslims.” Madhavan’s friend, Salman Raschid, in Trinity College Cambridge, was a Burmese Muslim. In Rangoon we met his father, U Raschid, [Haji], a respected politician. Later, we found that our own Indian Ambassador in Berne, Dr. M.A. Rauf was his brother.

I first met Taj Bibi as she came out of her home to dry her hair in the sun. I was startled as her face was bedaubed with a white paste. Called “Tanakha,” it is like sandal paste and the beauty aid that keeps complexions smooth and unblemished for Burmese women and children.

A little older than I was, Taj Bibi was a tall girl. High cheek bones accentuated her slanting eyes. She had long, thick hair, worn in the style of unmarried girls; a top-knot from which a plume of hair cascaded down. She gave me a soup from her home called “Hinjyo”, a well-known noodle dish called “Khauswe” and introduced me to “Balechaung”, a spicy pickle. She helped me and some friends dress up in authentic Burmese clothes with appropriate hairstyles.

Taj Bibi, painstakingly taught me a film song sung by Myint Myint Htay [film star of yesteryear] who was partnered by U Ba Shwe in the romantic lead. I had heard the song often on the radio. The tune was melodic and easy but I had to work hard on pronunciation. The song had the refrain “Let us dance on the rainbow.” Some words are now blurred, but I can still sing  the song. Optimistic, ending on a joyful note, it envisaged a golden home for the lovers who were dancing on the rainbow. The tune was lilting and rhythmic, dispelling loneliness or home sickness. I think of Taj Bibi, now in her eighties; if she is still there I hope that  happiness suffuses her life.

During these dire Covid days of uncertainties and terrors, may the blithe and carefree times of the past return to all of us, rainbows colour our days.

3 COMMENTS ON THIS POST To “Dancing on the Rainbow”