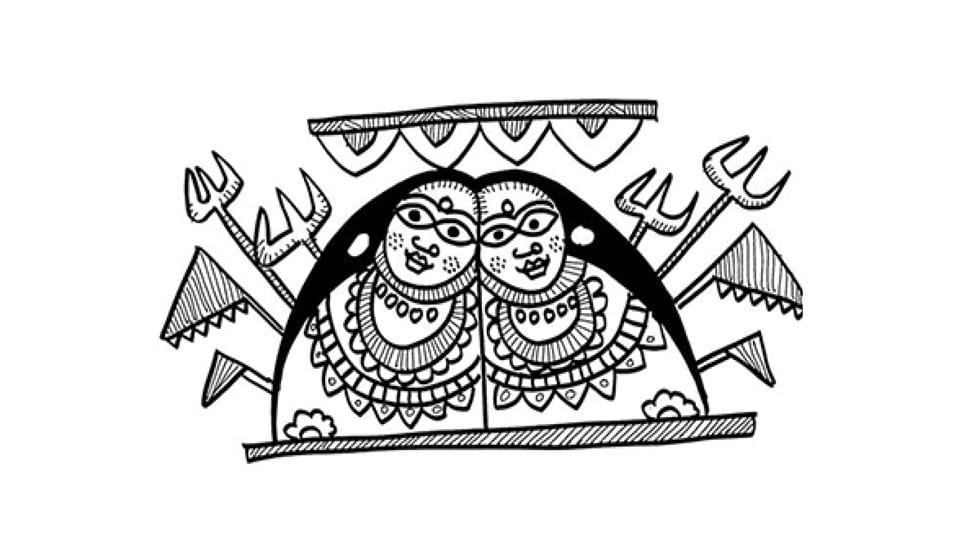 A Pair of Goddesses

Also, Ravi Randal Mata represent the two wives of Surya, Saranya and Chaya, light and shadow. In Rajasthan, Shakambari is worshipped with Satakshi. In Ujjain, it is Mahamaya and Mahalaya, the two female guardians of the Shiva’s forest, Mahakaalvan. In Odisha, there are the twin Tara Tarini Goddess.

In Telangana, a great fair is held in January by the local tribal communities for the mother and daughter pair of Samakka and Saralamma, legendary warriors who led the community a thousand years ago. In Bengal, Manasa-Netadhobani, the snake-venom removing Goddess and the washer-woman Goddesses, are worshipped as a pair, reminding us of tantrik yogini collectives, associated with ‘lower’ caste professions, who battle celibate jogis.

During Ganesh Chaturthi, the Goddess Gauri is worshipped. She is worshipped in two forms — Jyeshtha, or the elder one and Kanishtha, or the younger one. The Kanishtha Gauri is brought from the main door, while the Jyeshtha Gauri is brought from the back door and, together, they are located on either side of Ganesha and worshipped. Some identify the two Goddesses as Ganga and Gauri, the two mothers of Ganesha, one who sits on Shiva’s head and the other who sits on his lap.

In Vidarbha region, Lakshmi is worshipped as two pots, representing her and her sister, during “karva-ashtami” just before Diwali.

Who are these twin Goddesses? This is not very clear. They are sometimes described as sisters, sometimes as mother and daughter, sometimes Goddess and her companion, and sometimes as co-wives of the same deity (like the two wives of Shiva, or the two wives of Surya). Rarely, are they seen as two friends, who together go into battle to defeat an asura who cannot be defeated by a single person.

So, the two are worshipped in pairs. Some have argued that these represent the twin forms of the Goddess — the white and the black; the one that creates and the one that destroys. So, the pairing then becomes the wild form and the domestic form of the Goddess. But, one cannot be really sure. In Mesopotamian mythology, one does finds such Goddess pairs, Ishtar and Ereshkigal, who love the same man, embodying life and death, spring and winter.

Some have suggested that these could represent lesbian couples who committed suicide or who met with violent deaths at hands of householders who did not approve their relationship. To appease their twin spirits, temples were built for the two Goddesses. But, this is highly speculative. Or two sisters who chose not to get married or two friends who gave each companionship rather than choosing marriage. Or co-parents in a different kind of a household.

Stories such as these empower a younger generation of women seeking some kind of a cultural foundation that breaks heteronormative patriarchal stereotypes.

Decoding Mythology Dr. Devdutt Pattanaik
Lessons from Lockdown
What this Virus has taught me