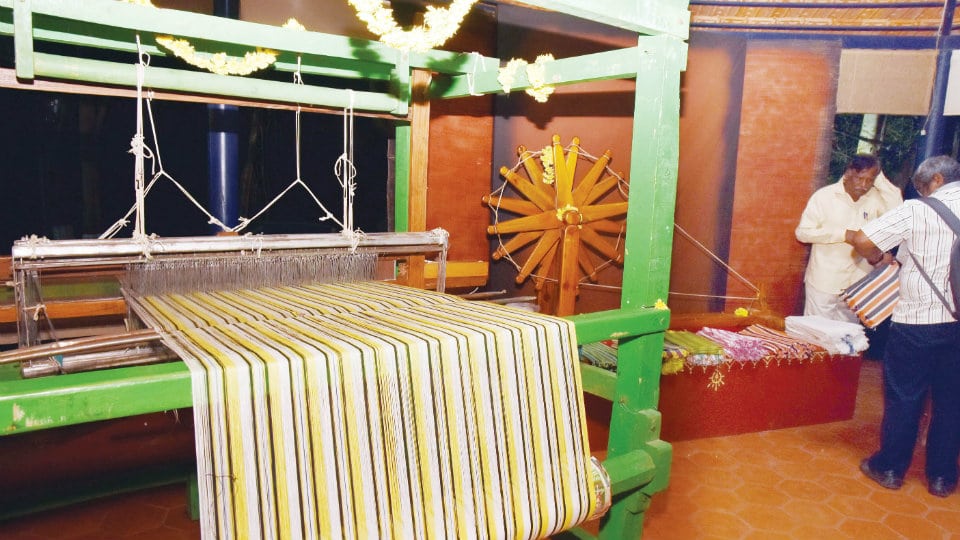 Mysore/Mysuru: The serenity of Sabarmati Ashram touches the very core of our ‘being’ and we develop a strange bond with the man who changed the course of Indian history. A visit to Sabarmati Ashram in Ahmedabad in Gujarat, one realises and appreciates the sheer power of the frail man who moved nations with his grit and determination.

Sabarmati Ashram, which is also referred to as Mahatma Gandhi Ashram or simply as Gandhi Ashram, was an epicentre of power and a very important place that influenced events that finally culminated in the Independence of India on the 15th of August, 1947.

It was in the year 1917 that the Gandhi Ashram was born. The Ashram is built on the banks of River Sabarmati and served as Mahatma Gandhi’s home where he stayed with his wife Kasturba for a period of 12 eventful years.

Visitors to Rangayana for the 6-day Bahuroopi Theatre Festival can enjoy the ambience of Sabarmati Ashram that has been recreated at Rangayana premises. The Ashram has been recreated complete with charakhas, handloom, Khadi textiles and others under a thatched roof with the board ‘Charakha mattu Kaimagga’.

Several boards with Gandhiji’s ideologies like non-violence and truth, along with his rare pictures, have been erected in the premises.

The slogans of Gandhi: “My religion is based on truth and non-violence. Truth is my god and non-violence is the means of realising Him” and similar ones are on display. A replica of Mahatma Gandhi is also erected at a vantage point.

Keeping in mind Gandhi’s vision for clean India, the premises is plastic-free and bamboos have been used for boards and other crafts on the premises.

As the Mahatma advocated development of cottage industries in villages, a few shops, selling kitchen utensils made of clay and bamboo, have been opened. Artisans are also demonstrating pottery and basket-weaving at the venue.