Home » News » A Royal Wedding and a Birthday 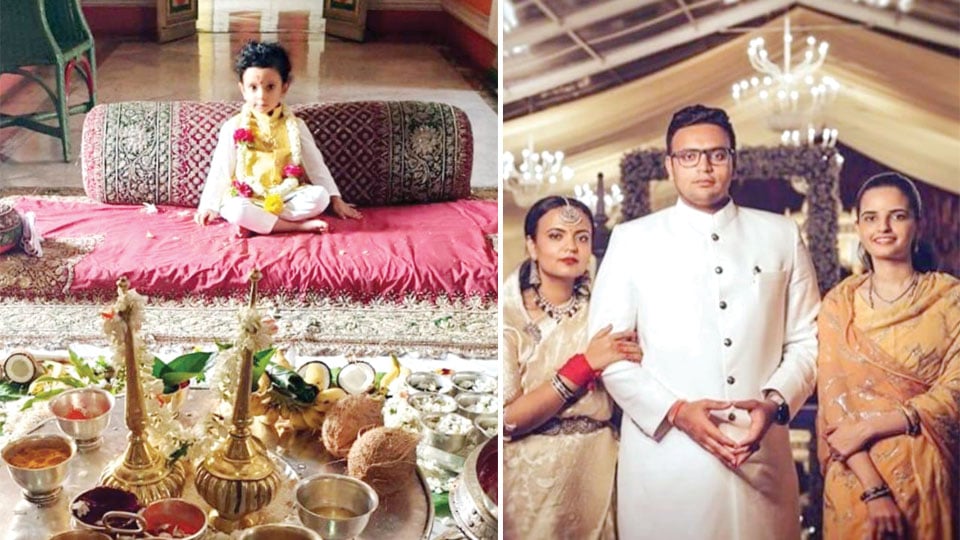 A Royal Wedding and a Birthday

* Little Aadyaveer showered with blessings on his second birthday

Mysuru: Royalty always inspires and people lap up whatever is associated with royalty. Be it royal wedding or royal baby birthdays, the amount of literature about royalties and monarchies that has been produced from a historical perspective during modern times is indisputably enormous.

Those who follow the goings-on of monarchies usually find themselves with royalty news aplenty to pique their interest. Last week, Mysuru saw two major events associated with the Mysore royal family.

The royal family of Sailana is a branch of the great Rathore house, cadets of the Royal House of Jodhpur. The State owes its origins to the Jagir created for Raja Jai Singhji, great-grandson of Ratan Singh of Ratlam, in 1716. He subsequently conquered or annexed territories in the region and established himself as an independent ruler in 1731.

Sailana was made the capital of Sailana State in 1736, a Princely State during the British Raj. It was later merged into Indian Union.

Interestingly, the royal family of Sailana is a family that has juggled the royal insignia and the ladle with equal ease — earning them a unique sobriquet of the ‘The Cooking Royalty.’

For the members of the royal house, it is not just blue blood that runs through the family but a passion for cooking as well.

While the royal wedding took place at Lalitha Mahal Palace on Dec. 10 and 11, the birthday was celebrated at Mysore Palace yesterday.

Aadyaveer’s second birthday rituals were performed by Palace Priests as per tradition and ‘Nakshatra’ yesterday but the baby’s actual birthday was on Dec. 6.

The event was, however, limited to close relatives of the family. The rituals were supervised by Aadyaveer’s grandmother Pramoda Devi Wadiyar.

Little Aadyaveer was made to sit on a decorated bed laid on the floor and was made to wear a garland. After performing the rituals, priests, parents and Aadyaveer’s grandmother blessed the child.

The photos of the birthday rituals were shared by Yaduveer on his Facebook page with the following text:

“The Vardhanti of Sri Aadyaveer Narasimharaja Wadiyar was celebrated at the Palace, Mysore, today. We pray to Goddess Chamundeshwari to bless him with good health, abundant happiness and prosperity.”