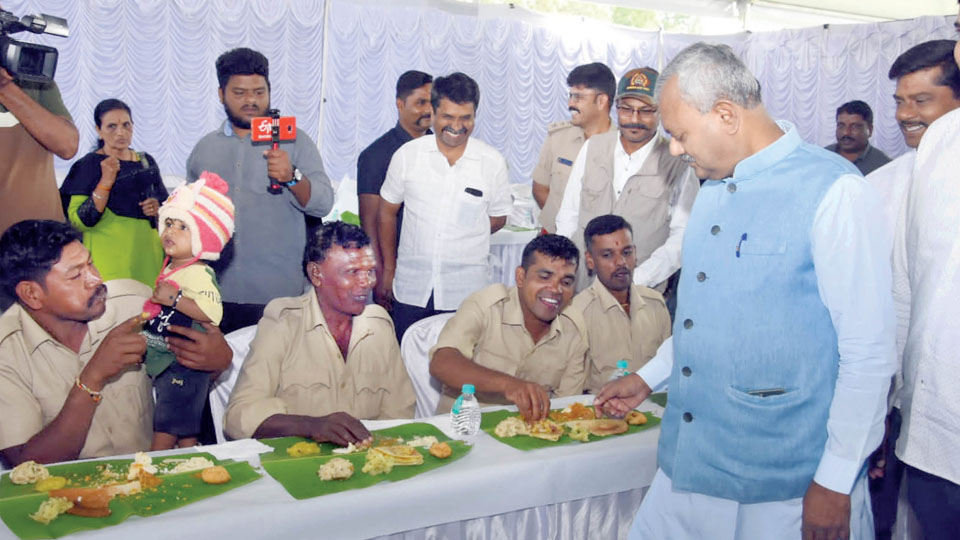 Mysore/Mysuru: A sumptuous breakfast was served to Mahouts, Kavadis and their families at the Mysore Palace this morning. District Minister S.T. Somashekar served them breakfast and later joined them along with other guests.

The breakfast was arranged by the Mysuru District Administration and the Mysore Palace Board and an elaborate spread was relished by over 500 persons. Over 180 to 200 members were the Mahouts, Kavadis and their families and the rest were guests, followers of the Minister and the media persons. Dishes including idli, vada, holige, kesaribath, set dosa and upma were served.

The holige was an additional sweet as elephant Lakshmi had given birth to Dattatreya in the Palace campus. The Minister later viewed the mother and the calf and expressed happiness.

The Minister said that the Mahouts and Kavadis were here to help celebrate the Dasara festival successfully and tradition demanded that they be served well during their stay here. “We will provide all necessary infrastructure to them during their stay,” he added.

Somashekar personally served the holige and thanked the elephant handlers for their dedication and annual help.

The Mahouts said that the sumptuous breakfast given to them was a feast and they enjoyed the different delicacies served. The event was organised as a special gesture to caretakers of Dasara elephants.

After breakfast, the Minister played cricket with the children of elephant handlers for some time and also distributed toys and playing materials to the children.

A health check-up camp was organised for the elephant caretakers by the JSS Medical College and Hospitals. Basic ailments were checked and medications were provided.

2 COMMENTS ON THIS POST To “A sumptuous breakfast for Mahouts, Kavadis, families”