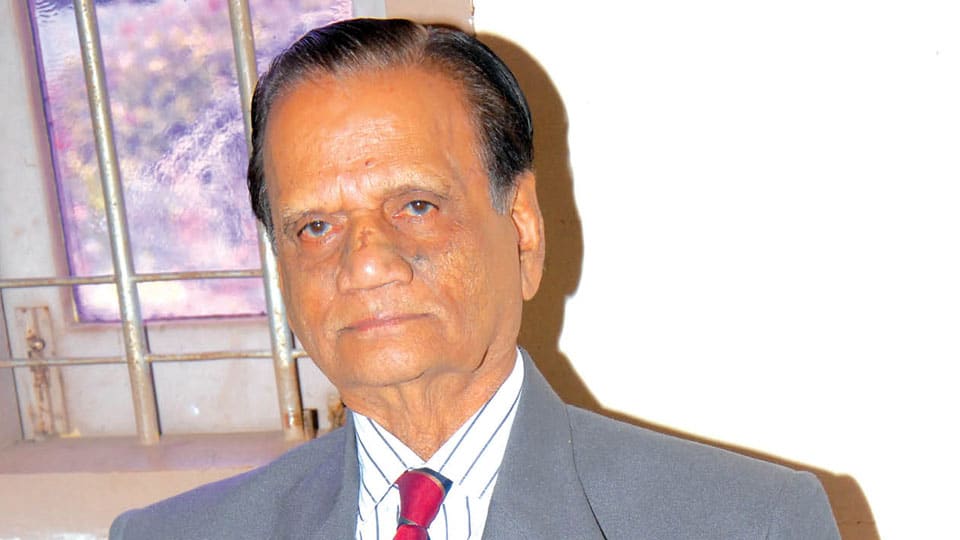 A Tribute – B.S. Srikantaiah: A Legendary Educationist and Personality

By Monks and Staff of Sri Ramakrishna Vidyashala

We are profoundly saddened at the passing away of B.S. Srikantaiah, who was known fondly as “Namma Headmashtru” by thousands of students who trained under him at the prestigious residential Composite Pre-University College, Sri Ramakrishna Vidyashala run by Sri Ramakrishna Ashrama, Mysuru.

Srikantaiah procured his Bachelor of Arts degree in the early 1950s with three Gold Medals from the University of Mysore and his Master’s degree from the Benares University. He joined Sri Ramakrishna Vidyashala in Mysuru on the day of its inception in 1953 as a teacher and made a positive impact on the young minds of the School till the day he passed away on 28th September, 2020.

He gained experience across all phases of the sector of education and was active and influential in raising thousands of young men in civil society. In a career spanning over 67 years, his continuous, unbroken commitment and service as a Teacher, Head Master and Coordinator perhaps cannot be emulated and could even enter the Guinness Book of Records.

He had the rare privilege of serving under the Founder of Sri Ramakrishna Vidyashala, most revered Swami Shambhavanandaji Maharaj who was the architect of building a school for the future. Srikantaiah was elevated to the position of Head Master in 1965 and successfully shaped the budding minds for the next 25 years till he retired in 1990. He contributed significantly to the dynamics of the School serving under most revered Swami Sureshanandaji Maharaj. Swamiji was a great educationist who lifted Vidyashala to great heights.

Srikantaiah continued to lend his experience and support to most revered Swami Muktidanandaji Maharaj, Adhyaksha, Sri Ramakrishna Ashrama, Mysuru, in guiding the students reach the pinnacle of glory. Their partnership and earlier pioneering commitment lent stability in making the School one of the most sought after institutions in the State today.

Known as a stern Head Master during his prime years, the students shuddered committing a mistake. A man of values, he always guided the budding minds on the right path. No work was meagre and small in his eyes. He had a keen eye for the minute details for all types of work he undertook with dignity.

Seldom will we ever come across a dedicated teacher in modern day society where modernisation has considerably declined the quality of teacher-student relationship.

There was not a thing that Srikantaiah was not aware of at the School. He shared an affectionate bonding with the staff members guiding and helping them. He also took care of their needs amicably and empathetically. The alumni thronged to the School from various parts of the globe to meet the welcoming teachers and love of the monks. At the age of 90, of late he had become soft and a little slow in his work but nobody could ever match the undaunted spirit for his love of work.  He showered great affection on the present and the old students.

We stand here today with a broken heart. The loss of a guide and a mentor is something we could have never prepared for. Even during the past week, under insurmountable odds, he refused to prepare himself and was not ready for the inevitable. He had so many dreams and so many plans for the future that he would have made these dreams for the institution come true.

There is a vacuum left behind in his absence. He was prepared to fight, but never had a chance to lace up the gloves. He left us with the dignity and the respect he deserved. He achieved his goal of making us proud and himself. Our lives will never be the same; he made sure of that. He was a dreamer, a leader, a patriot, a true gentleman and was known for his sweetness and enduring wit. He could enter a room and brighten it with his smile, his attitude or just his presence.

The field of education has lost a great mentor who supported thousands of young men believe in their strengths and in making this a better place to live in. We mourn him greatly. Our beloved Srikantaiah Sir was a person who combined incredible achievement with great personal grace. He was an ardent devotee of Sri Ramakrishna, Holy Mother Sarada Devi and Swami Vivekananda. He sincerely lived their teachings and tried to translate their messages into actions in his life. A legacy has come to an end. His big shoes will never get filled.

2 COMMENTS ON THIS POST To “A Tribute – B.S. Srikantaiah: A Legendary Educationist and Personality”