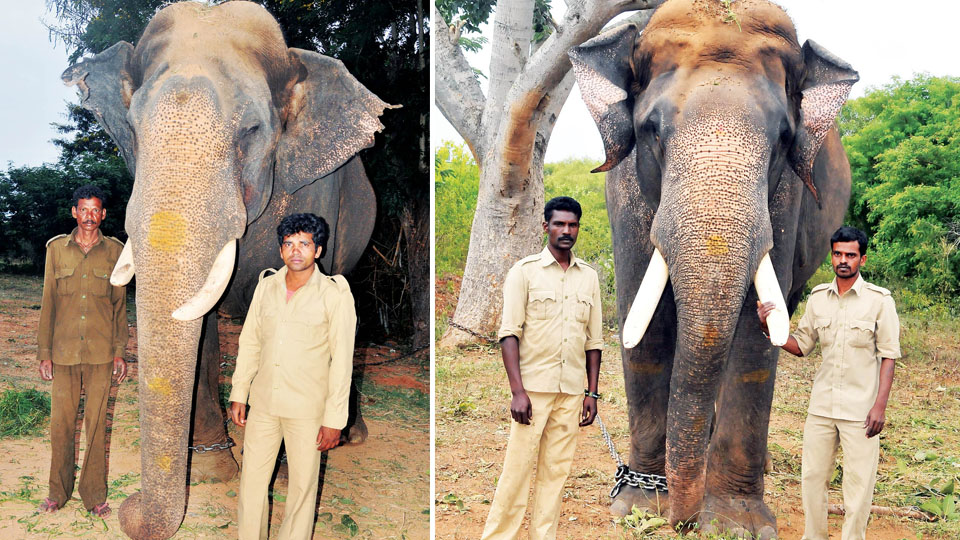 Mysore/Mysuru: Young and strong Abhimanyu will carry the Golden Howdah during the Vijayadashami procession this year as Arjuna, who carried the 750-kg Howdah till now, has turned 60. As per the Supreme Court directions and Union Government’s guidelines, no elephant aged above 60 years is supposed to be tasked with heavy and stressful duty.

So far, Arjuna has effortlessly carried the Golden Howdah for eight consecutive times and once, years ago, he successfully carried it when the Howdah was mounted on him from Bannimantap to Mysore Palace after elephant Drona carried it during the Vijayadashami procession from Palace to Torchlight Parade Grounds.

Though the Forest Department has confidence that Arjuna can carry the Howdah for a few more years, they do not want to violate the Court and Government orders. That is why, 54-year-old Abhimanyu is being brought in for the task. Abhimanyu usually carries the wooden replica of the Howdah during the Srirangapatna Dasara procession.

Even legal experts have suggested to the Forest Department not to mount the ‘Ambari’ on Arjuna as it might lead to litigation by animal rights activists, sources from the Department told Star of Mysore.

If Abhimanyu begins his stint of carrying the Golden Howdah this year, he can carry it for six consecutive years before he turns 60. Abhimanyu is participating in the festival for the past 20 years and was captured at Hebballa forest in Kodagu district in 1977.

Arjuna was captured in 1968 during a Khedda operation from the Kakanakote in Western Ghats. After he was tamed, he is a regular member of Dasara celebrations. Arjuna has donned the lead role of carrying the Howdah since 2012.