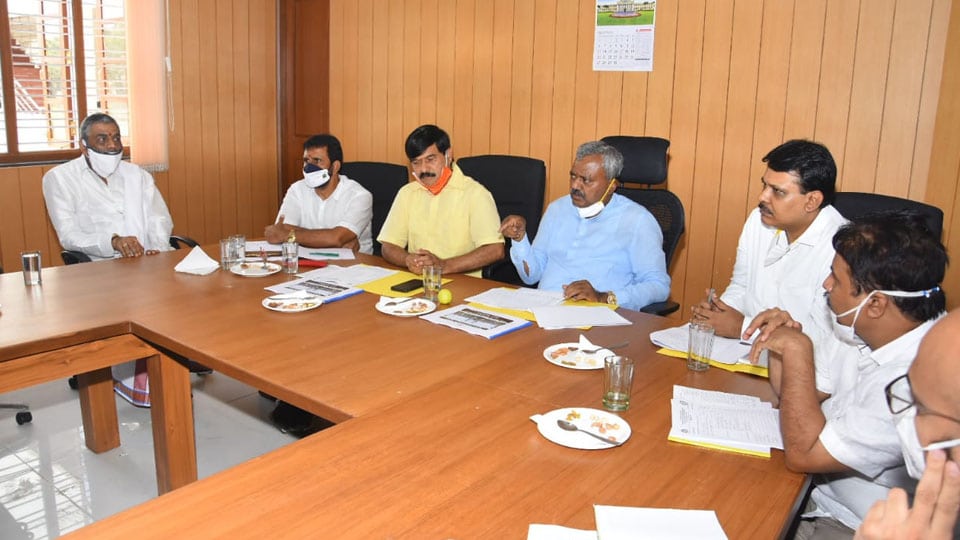 Elephants, mahouts, kavadis and relatives to be housed inside Palace with maximum precautions

Mysore/Mysuru: Mysuru District Minister S.T. Somashekar held an emergency meeting at the new Deputy Commissioner’s Office at Siddarthanagar yesterday to discuss the preparation for Dasara 2020. This was the preliminary meeting ahead of the Dasara High Power Committee meeting that will be chaired by Chief Minister B.S. Yediyurappa on Sept. 8 (next Tuesday).

During the meeting, officials brought to the notice of the Minister that due to COVID-19 pandemic, the process of bringing Dasara elephants to city has been inordinately delayed. Usually, 12 elephants are brought from various elephant camps and the mahouts, kavadis and their family members are housed inside the Mysore Palace in over 50 sheds. The elephants undergo training and nutritious food is given to them to gain more weight and strength.

Usually over 250 to 300 family members and relatives of elephant keepers stay in the sheds inside the Palace. “Due to the pandemic, extra precautions must be taken while constructing the sheds and housing the mahouts, kavadis and their families. Once inside the city, the forest dwellers usually go to the city on various errands like purchasing regular items, shopping and city sight-seeing. Enough care must be taken to ensure that these people do not contract the virus as the men have the habit of consuming liquor at bars,” the Minister was told.

The MLAs and H.V. Rajeev expressed concern that even if one person contracts the disease, it might spread to all the forest dwellers, risking their lives. Even the elephants can contract the virus like it happened at Bronx Zoo in the US where tigers were infected by COVID-19.

The Minister was told that at present, the Dasara elephants were housed at Balle, Mathigodu, Dubare and Ramapura Elephant Camps and it might be risky to bring them to Mysuru without any precautions. The Standard Operating Procedures followed everywhere must be followed by the tribals from the haadis and they must be educated on social distancing and sanitisation, the meeting felt.

The meeting decided to conduct Gajapayana (the march of Dasara elephants from the forests to city) in a simple manner without any crowd due to the pandemic. Even at the Mysore Palace while welcoming them, only a traditional puja must be held instead of an elaborate welcoming ceremony with a large crowd in attendance.

Attendees of the meeting felt that while the elephants are housed inside the Palace, visitors must not be allowed near the elephants or their keepers and at least 10-ft. distance must be maintained. The Minister was told that due to the pandemic, mahouts and kavadis have decided not to bring their family members to city but stay safe inside the forests.

Minister Somashekar asked the officials to prepare the minutes of the meeting and present it before the Dasara High Power Committee meeting to be held on Sept. 8 where a final call will be taken on the modalities of the celebrations, budget and precautionary measures.