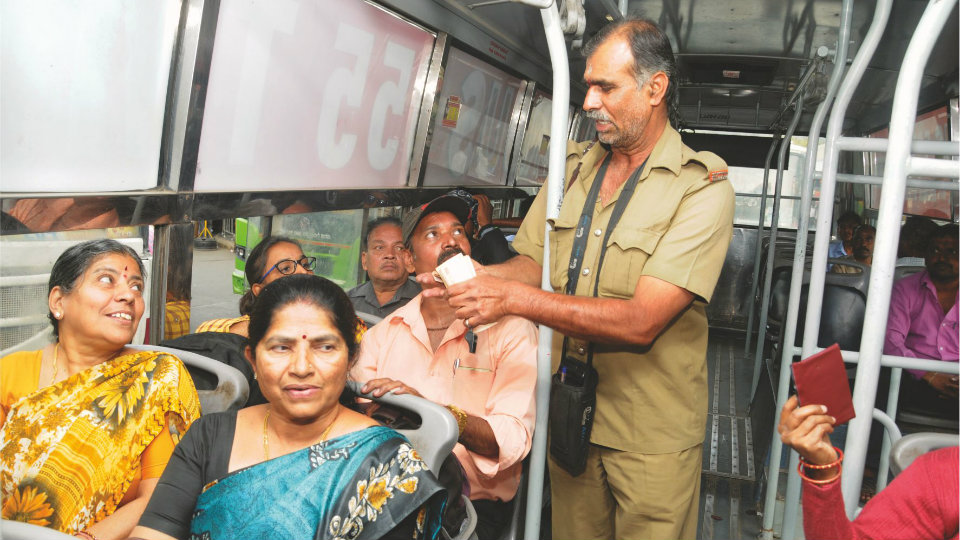 I am not a November Kannadiga. I am 365 days, 24×7 Kannadiga and I am proud to be born a Kannadiga,” is the strong message that this man in uniform sends.

The man in uniform, who is a bus conductor on route no. 94 K/5 in the KSRTC Mysuru City Bus service, is also called ‘Kannada Conductor.’ His name Thyagaraj also reflects the sacrifice, service, passion and the commitment he has for the cause he is espousing — the spread of Kannada language in his own unique way.

The chant of Kannada, Kannada… is not something new. The Gokak agitation launched on April 2, 1982 gained momentum after matinee idol Dr. Rajkumar assumed leadership. The then Congress government headed by R. Gundu Rao accepted the recommendation made by the Gokak Committee to provide First Language status to Kannada. Kannada organisations celebrated “victory” on July 27 that year.

If one is committed to a cause, he also has to walk the talk. Thyagaraj believes in setting his house in order first. He works in the first or second shift. As soon as he gets up in the morning, he invokes Kannada Mathe Bhuvaneswari’s name and as he steps into the bus, chants ‘Kannada Mathege Jayavaagali’ (let there be victory for Kannada mother Bhuvaneshwari) and starts his daily work. 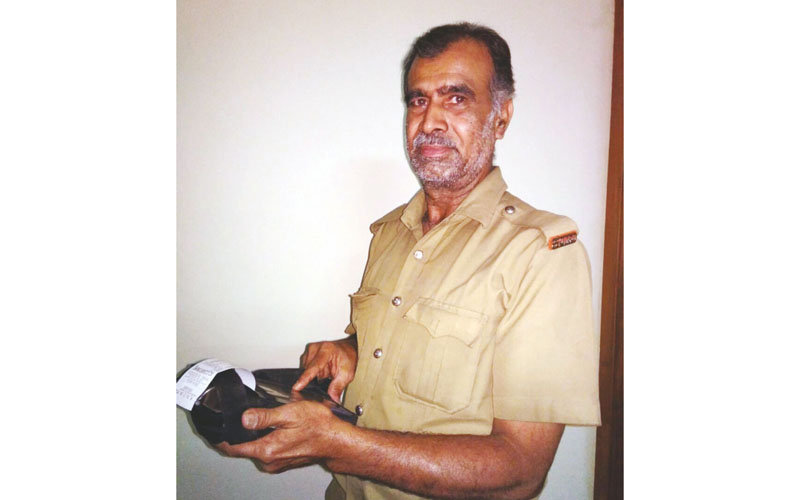 As a bus conductor, he needs to be constantly talking to people and he communicates only in Kannada, without using a single English word in his conversation. That is the level of command and control he has over Kannada language.

He announces the names of all the roads, circles and bus stops on his route in Kannada only. Yarree… Jagadguru Shivarathreeshwara Maha Vidyalaya (JSS Circle), Lakshmi Chitramandira (Lakshmi Talkies), Banavara Ramaswamy Vritta (Ramaswamy Circle), Kamakshi Dhavakane (Kamakshi Hospital), Maruthi Sanchari Chitramandira (Maruthi Tent), Shilabhavana (Stone Building), Nandini Haalina Dabba (Nandini Milk Booth) are some of the names that rolls out from his tongue in pure Kannada while he asks passengers to get down at the bus stops.

Some of the other names in the route that he has traversed includes Aaru Dwarada Vritta (Hardinge Circle or 6 Gate), Aidu Deepagala Vritta (Five Lights Circle) and Gramantara Sarige Nildana for Suburban Bus Stand. Not even by chance does an English word slip out of his tongue.

Says Thyagaraj: “I was annoyed by the behaviour of this Kannadiga official for his disrespect for Kannada and his anti-Kannada stance. ‘I told him curtly.’ If you want to suspend me go ahead and do it. But give it to me in writing that you are suspending me because I use Kannada language.”  From that day he bowed to my love for Kannada, said Thyagaraj, breaking into a smile.

Seeing his proficiency in the language and use of Kannada words, KSRTC Mysuru Division Cultural Association felicitated him in 2005-06. He says that he is not a ‘November Kannadiga’ referring to the Kannada Rajyotsava celebrations by various outfits during the November.

Thyagaraj hails from Kothanahalli in Maddur. He was working in Karnataka Ball Bearing and after it closed down he came to Mysuru in 1984. He got an appointment order from KSRTC on Aug.24, 1993. He worked as a conductor in Mysuru-Chikmagalur, Mysuru-Kerala routes and since 2010, he is the conductor in KSRTC Mysuru City Bus Service. Even as the Kannada activists profess their so-called love for the language by resorting to all kinds of means, here is one untainted Kannadiga who is spreading the message of greatness of one of the oldest languages in the world.