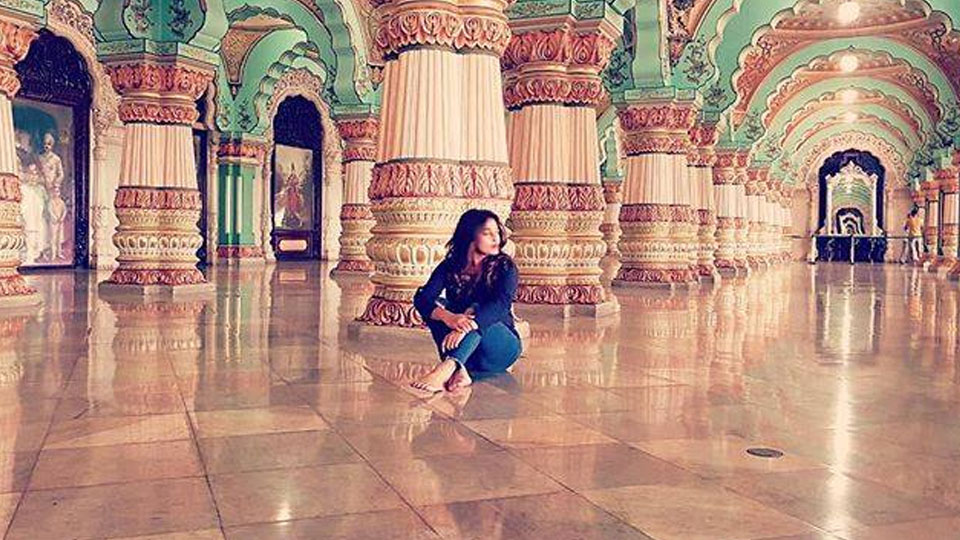 Mysuru: The social media and TV channels are abuzz with images of  a photo-shoot of Kannada actress Nidhi Subbaiah inside the Durbar Hall of Mysore Palace.

The photos, shared across various mediums, have raised many questions as to who gave the permission for the actress to take pictures inside the Palace and its ornate inner halls when the general public are not allowed. Even the actress has uploaded the photos on her Instagram account two days back.

The Palace is out of bounds for film and serial shooting and no one is allowed to even carry cameras inside the inner sections. Even mobile phones are not allowed inside. During special occasions like Dasara, media persons have to obtain special passes to photograph the ceremonies and rituals inside the Durbar Hall.

The last film shooting that took place inside the Palace was Dr. Rajkumar-starrer Mayura. After that, no film crew was allowed to film inside. In 2014, Tamil Superstar Rajinikanth and his crew had approached the Palace authorities for permission to shoot his movie Lingaa inside the Palace. But the authorities denied access and asked the crew to shoot from outside.

Following the reports and photos of Nidhi Subbaiah appearing in various media, many readers called Star of Mysore to ask if they too have permission to shoot photos inside the Palace. SOM then contacted T.S. Subramanya, Deputy Director of Mysore Palace Board, to   ask about the photos and he said that people are allowed to take photos inside the Durbar Hall.

“Earlier, a fee of Rs. 20 was being collected from the visitors who wanted to click photos. When K. Ratna Prabha was the Chief Secretary, it was decided that the fees must not be collected and the visitors must be allowed to click photos like it is allowed at Taj Mahal. Now we are allowing visitors to take photos and there are no restrictions,” he said. The Chief Secretary of the State is also the Chairperson of Palace Board.

When asked about actress Nidhi’s photo-shoot, Subramanya said that he had no idea when the actress entered the Durbar Hall and photographs were clicked. “I have not given permission. That was not a film shooting but some people would have clicked her photos with a mobile phone. We allow people to take photos inside Durbar Hall and Kalyana Mantap. But film and serial shootings are not allowed,” he said.

It may be recalled here that in 2016, a couple, children of influential bureaucrats, had shot fashion photographs and pre-wedding videos inside the Durbar Hall and the issue became a controversy. The then Deputy Commissioner C. Shikha, who is also the Executive Officer of Palace Board, had ordered an inquiry.