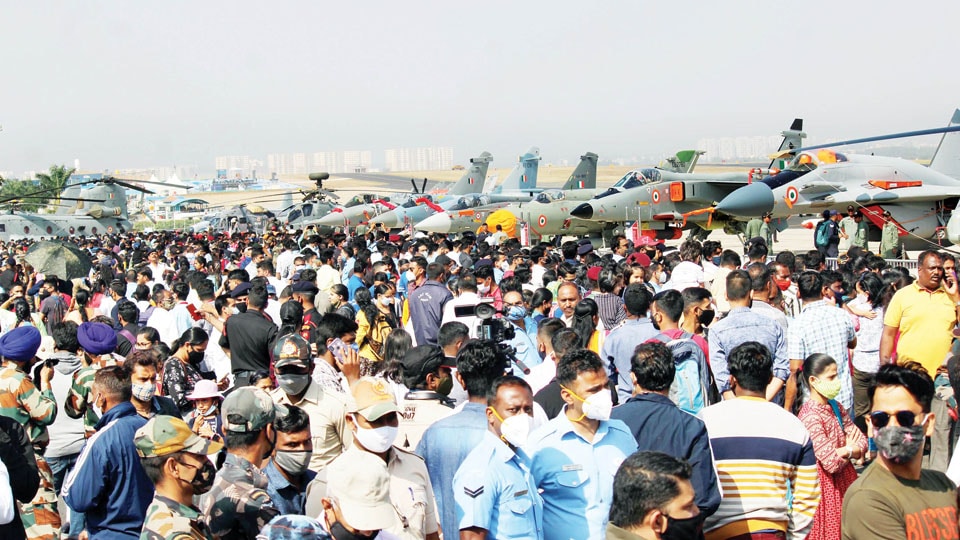 Bengaluru: The Aero India 2021 event, the country’s premier aerospace and defence exhibition,  kick-started at Indian Air Force Station in Yelahanka, Bengaluru this morning in the shadow of the COVID-19 pandemic.

Speaking at the biannual programme which is expected to see 601 exhibitors, including 523 from India and 78 from 14 foreign countries, Rajnath Singh said that the event will display the vast potential of India and the multifarious opportunities that India offers in the field of defence and aerospace sector.

Rajnath Singh said that India plans to spend 130 billion dollars on military modernisation in the next 7-8 years.

“We have taken steps to strengthen our security apparatus. Domestic manufacturing of bigger and complex defence platforms has now become focus of our policy under ‘Aatmanirbhar Bharat Abhiyan’,” the Defence Minister said.

Rajnath Singh expressed happiness over HAL getting the go ahead from the IAF for producing Tejas MK1A aircraft. “I am very happy that HAL has got the orders for the development of 83 new indigenous Light Combat Aircraft (LCA) — Tejas MK1A from IAF valued at more than Rs. 48,000 crore, it is probably the biggest ‘Make in India’ Defence contract till date,” the Defence Minister said.

With a combination of both physical and virtual exhibition, the 13th edition of the biennial international event will be the world’s first hybrid aerospace show, officials said. A negative COVID-19 RT-PCR test report is a must to attend the three-day event, where each day only 3,000 visitors will be allowed at the flight display venue in view of the pandemic.

For the first time, Defence Ministers of Indian Ocean region from 27 countries will participate in person or through virtual mode in a conclave organised on the side-lines to discuss shared threats and co-operation in disaster management.

A full-dress rehearsal was held yesterday with ‘Sarang’ helicopter and ‘Surya Kiran’ aircraft taking part in an aerobatic display. People watched with awe as the aircraft soared in the sky and performed various manoeuvres mid-air.

Among the key attractions in the conclave will be flight display by ‘Surya Kiran’ aircraft and ‘Sarang’ helicopters. One of the highlights of the show, a B-1B Lancer heavy bomber, of the 28th Bomb Wing based out of Ellsworth Air Force Base in South Dakota, will perform a “fly-by.”

HAL would showcase ‘Aatmanirbhar Formation Flight’ consisting of HAL products such as LCA trainer (LIFT Trainer), HTT-40, IJT, Advanced Hawk Mk 132 and Civil Do-228 will fly in a special formation showcasing the spectrum of trainers and signifying self-sufficiency in the trainer segment. The US has offered three of its frontline fighter planes, F-18, F-15 and F-21 to the Indian Air Force.