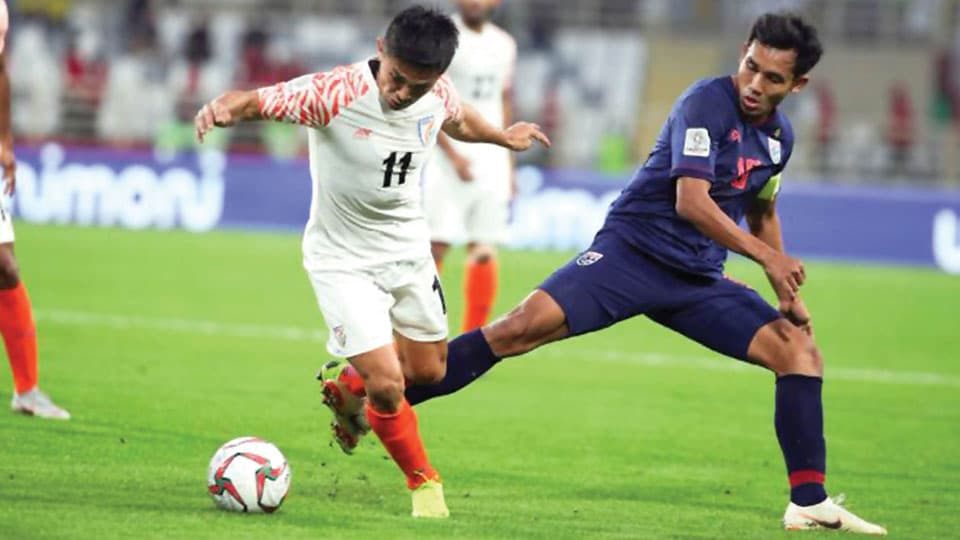 Indian forward Sunil Chhetri (11) in action against the Tailand player during the AFC in Abu Dhabi on Sunday.

Abu Dhabi: Football’s goal machine Sunil Chhetri struck a brace to help the country outplay Thailand 4-1 and record its first victory in the Asian Cup since 1964 on a historic night in Abu Dhabi on Sunday.

Playing in his second Asian Cup and 105th match, Chhetri scored in the 27th (penalty) and 46th minutes for his 66th and 67th inter-national goals.

Midfielder Anirudha Thapa and substitute Jeje Lalpekhlua then struck in the 68th and 80th minutes to completely outclass Thailand at the Al Nahyan Stadium in front of Indian supporters.

With his two strikes, the 34-year-old Chhetri went past Argentine superstar Lionel Messi, who has so far scored 65 goals from 128 matches. Portugal superstar Cristiano Ronaldo is the highest scorer with 85 from 154 matches.

Thailand captain and striker Teerasil Dangda pulled one back for his side in the 33rd minute of the Group A match.

A draw in either of the two coming matches against UAE and Bahrain could see India through to the knockout round.

Ranked 97th in the FIFA charts, India went into the match eyeing a win against their 118th ranked opponents, but the scoreline and impressive show by the players, especially in the second half, was unexpected.

Thailand were the better side in the first half with an overwhelming 70 percent possession and more shots on target.