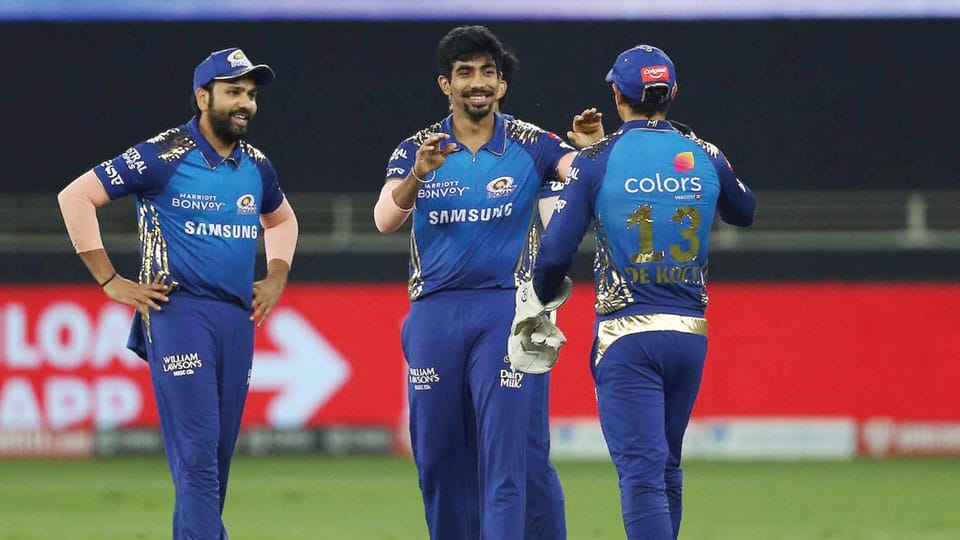 After fifties from Ishan Kishan and Suryakumar Yadav and cameos from Hardik Pandya and Quinton de Kock powered MI to 200/5, Jasprit Bumrah and Trent Boult ran through DC’s line-up, restricting them to 143/8.

Needing 201 runs to win, DC were reduced to 0/3. Boult bowled a two-wicket maiden, dismissing Prithvi Shaw and Ajinkya Rahane in the first over. Bumrah bowled a ripper of a yorker to disturb the timber to get Shikhar Dhawan out.

While Shreyas Iyer looked to counterattack, Bumrah had Iyer caught in the fourth over. Krunal Pandya gave MI their fifth wicket after Rishabh Pant was holed out in the deep in the eighth over.

Marcus Stoinis put up a brave fight with the bat as he and Axar Patel added 71 runs together. However, Bumrah’s return into the attack, ended Stoinis’ 45-ball 65-run knock in the 16th over. In the same over, Bumrah picked his fourth wicket as Daniel Sams was caught behind the wicket. DC eventually scored 143/8.

Earlier, DC, who elected to bowl, remained unchanged while MI made three changes to their playing XI, bringing in Jasprit Bumrah, Hardik Pandya and Trent Boult.

Quinton de Kock made a cracking start as the left-hander creamed three fours in the first over bowled by Daniel Sams. However, DC struck in the second over after R. Ashwin scalped the big wicket of Rohit Sharma, trapping the MI skipper before the wickets.

de Kock and Yadav though continued to attack as the pair took on the DC bowlers to power MI to 63/1 in the powerplay, with the left-hander moving to 38 and Surya scoring 22 off 14 balls.

However, Ashwin broke the de Kock-Yadav stand in the eighth over after de Kock was holed out in the deep.

Yadav continued his merry ways and brought up yet another stylish fifty of the season as MI moved past hundred in the 12th over. However, DC struck back, picking two wickets in quick succession dismissing Yadav for 51 and getting Kieron Pollard out for zero.

Ishan Kishan and Krunal Pandya though denied DC any immediate success. The duo put up a 39-run stand in 23 balls. While Krunal was watchful in his approach, Kishan started to open his shoulders and hit a four and a six off Kagiso Rabada in the 15th over. The pair hit  two fours and a six in the next over before Krunal got out in the 17th over.

The two then went after Nortje in the final over. While the right-arm pacer conceded just a run from the first two balls, Hardik slammed two sixes on the next two deliveries before Kishan sent one over the ropes on the final ball of the innings to take MI to 200.

While Kishan remained unbeaten 55 off 30 balls, Hardik slammed 37* from 14 balls.