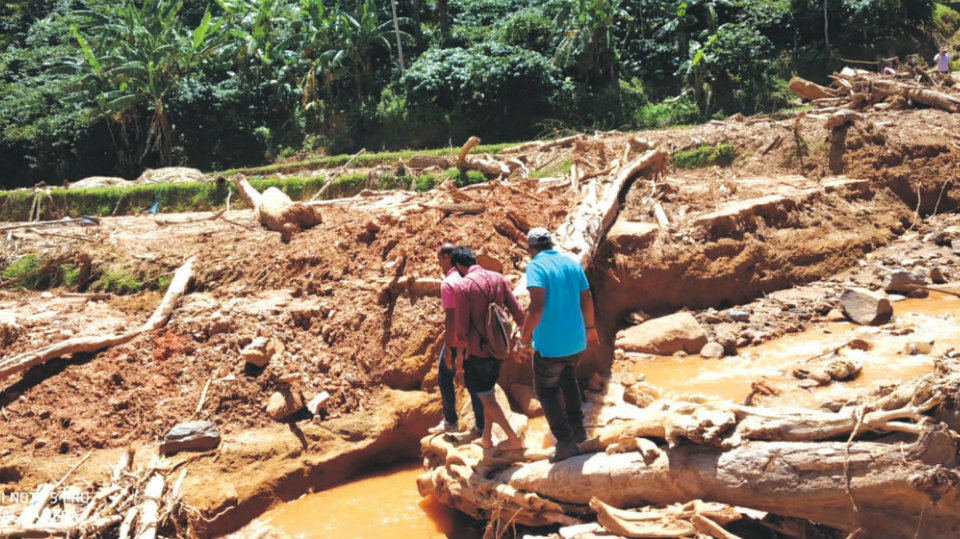 Madikeri:  Like the flood-hit Kerala and Dakshina Kannada, Kodagu is facing the phenomenon of drying up of wells and rivers, excessive heat and lack of potable water. Many residents have reported that coffee beans are drying up due to sweltering heat.

Soon after the destructive floods in Kodagu, it was hoped that the groundwater level that had depleted over the years would have increased, providing fresh drinking water. But the hopes are dashed now as wells are sinking deeper and deeper. The water level in River Cauvery in September resembles that of how it should be in March or April.

Rivers and streams are fast thinning and in most of the rivers, red soil has surfaced along with washed away trees and boulders. Many parts in Kodagu, especially in Madikeri and Somwarpet taluks, getting potable water is a difficult proposition. Flood victims, who have returned to their houses, are struggling to fetch potable water as muddy water still flows in rivulets and streams.

Compounding the problems, residents are facing hot weather and the district is fast turning into a drought-affected area. The District Administration has been supplying drinking water through tankers to several villages including landslide-hit Hebbatageri, Madenadu, Yemmethaalu, Meghathalu, Katakeri, Devastur, Kaloor, Galibeedu, Madapura, Mukkodlu and Mandalapatti. Those villages are still covered with soil.

According to villagers, earlier they were using the naturally available water from rivers, streams and wells. “All of us had our wells inside our house compounds. Now, the open wells have disappeared and the mini waterfalls and streams have changed their course,” said villagers of Kaloor.

Many rivers in Kodagu, including Cauvery, Lakshmanatheertha, Kumaradhara, Bethri (Cauvery), Hattihole, Thantipaala, Kadanoor River, Payaswini, Choranahole, Kakkehole, Keerepole and Madapura River, have reported excessive drying with many barren stretches along the river course. Streams that would flow perennially have dried up and even borewells are not helping as the groundwater has depleted in such a short span of time.

In August, all these rivers were in full spate and destroyed many families and their properties. “Now all of a sudden, the rivers are drying up and this is an alarming situation,” said villagers. All these rivers originate in mountain ranges surrounding the district and there were many waterfalls that fed the rivers.

Now, most of the mountain ranges have collapsed and waterfalls have gone dry, villagers added. Moreover, layers of soil, trees, rocks and boulders have rolled over along the river course, hindering the movement of water.

Water experts say that due to floods and landslides, rivers and rivulets have changed their course. Also, groundwater could have been redistributed. When the water in river declines, the groundwater table goes down too. As such there is a drop in water levels in wells, they say.

Kodagu
‘We 7 JD(S) MLAs from Mandya are like bodyguards of CM’, Says Minor Irrigation Minister C.S. Puttaraju
‘Palace-on-Wheels’ to roll on city roads