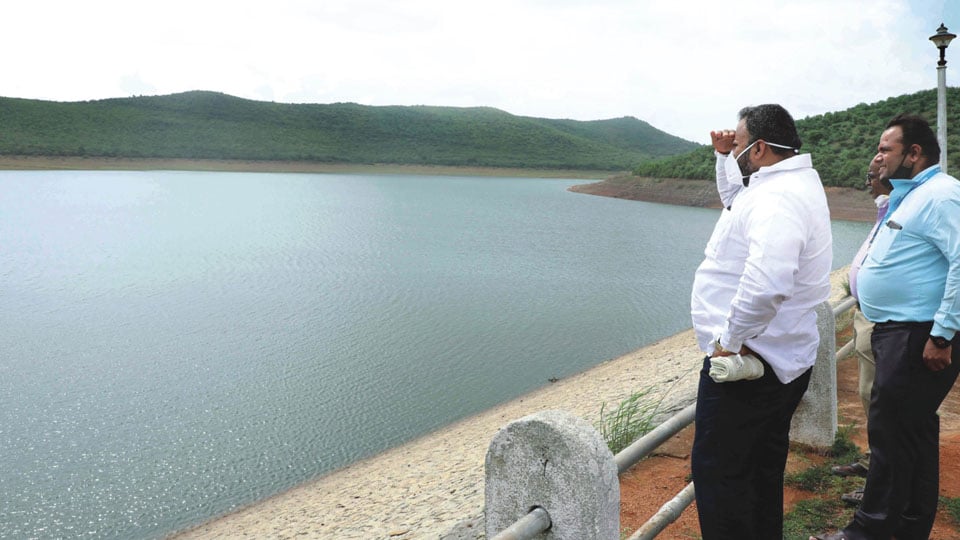 Nanjangud: The Nugu Lift Irrigation Project, which is aimed at providing water to a good number of villages in Nanjangud taluk of the district, has now become a reality, with the Finance Department approving sanction of Rs. 80 crore for the project, thanks to the effort of MLA B. Harshavardhan.

Nanjangud BJP MLA B. Harshavardhan had promised to implement the Lift Irrigation Scheme during his campaign in the run up to the 2018 Assembly polls. The project involves pumping of water from Kabini Dam near Chamegowdanahundi in Saragur taluk to Nugu Dam through the Rising Main, a pipeline used for conveying the pump discharge of water.

Soon after he got elected in 2018, Harshavardhan took up the project with H.D. Kumaraswamy, who headed the then JD(S)-Congress Coalition Government and succeeded in getting fund allocation for the project in 2019-20 Budget. Now Chief Minister B.S. Yediyurappa has sanctioned money (Rs. 80 crore) for the project, following which the work is expected to commence soon.

The project involves lifting of  water from Kabini Dam through a 2.5 metre diameter MS Pipeline over a distance of 3.05 km and filling the Nugu Dam via a 1.3 km channel drawn from the Delivery Chamber of the pipeline. The water that gets filled in Nugu Dam can irrigate 10,000 acres of land in different villages of Nanjangud taluk, including Karatale, Masage, Kalale, Handuvinahalli, Debur, Karalapura, Deveerammanahalli, Sindhuvalli, Kalihundi, Singaripura, Srinagara, Hedathale, Geekahalli, Devarasanahalli, Uppanhalli, Hosur, Kodinarasipura, Horalawadi, Mallur and Alaganchipura. There are also plans to install a Solar Power Plant at a cost of Rs. 17 crore as part of the project.

The Nugu river, which has its origin in Kerala, has a Dam constructed across it near Beervalu in Saragur taluk, covering an area of 18,511 acres, with a catchment area of 984 Sq.Kms. The height of the Dam is 2,400 ft, with a storage capacity of 5.44 TMC. The Nugu Dam has catchment area of 1,471 acres in H.D. Kote taluk and 16,639 acres in Nanjangud taluk.

Hitherto, the Nugu Dam’s Upper Canal and Halsur Canal used to run dry almost every year at a time when standing crops needed water the most. As no water flowed in  the Canals and with rains playing truant, most of the crops wilted for want of water resulting in huge losses to farmers.

The Narasambudhi Lake (Arasanakere) near Kodinarasipura in the taluk is said to be the biggest water tank in the district in terms of coverage area and also irrigates hundreds of the famed Nanjangud Rasabaale farms that come under the catchment area.

The tail end of Halsur Canal will wind up at Nugu Dam and as such, the continuous flow of water from Halsur canal is key for the filling up of Nugu Dam, which has failed to fill up for most of the time over the past 20 years.

With the project getting  Government sanction and financial approval, MLA Harshavardhan visited Suttur Mutt in Mysuru and sought the blessings of Seer Sri Shivarathri Deshikendra swamiji on Saturday.