Home » News » Motorcycle Diaries: He keeps his bikes close to his heart 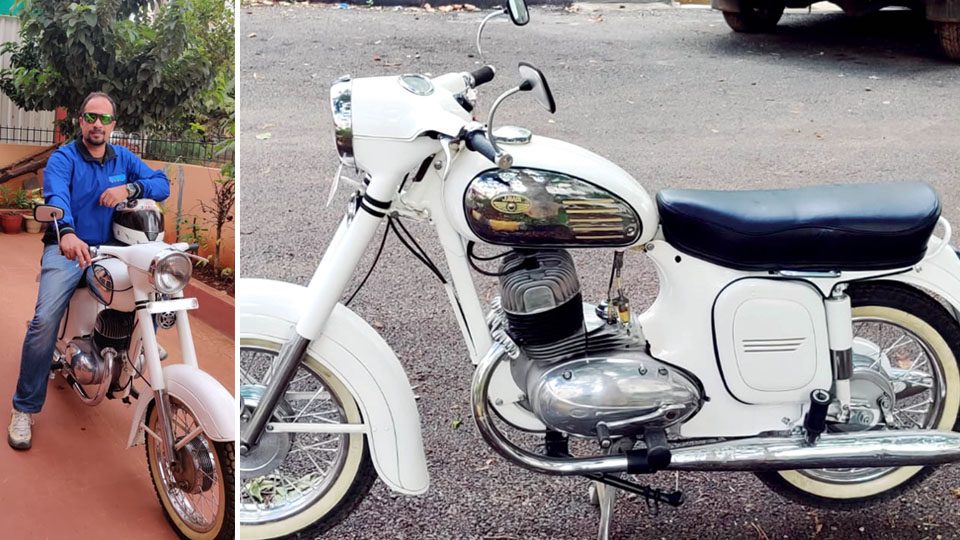 Motorcycle Diaries: He keeps his bikes close to his heart

Mysore/Mysuru: Bengaluru-based classic bike collector Kuttanda Leaven Cariappa looks for that particular exhaust sound of a two-stroke engine and his eyes search for a mono-colour, chrome-plated motorcycle whenever he is on the road, riding his yesteryear Jawa bikes.

Having a collection of five beauties in mint factory condition, he is looking to add more bikes to his collection. Three more bikes will join his envious possession soon. Hailing from Kodagu, Leaven Cariappa lives on Magadi Road in Bengaluru and works as an Information Security Auditor with PricewaterhouseCoopers.

A busy IT career has not stopped him from pursuing his passion for Jawa and he has a motley crew of bike enthusiasts as friends with whom he networks and is building a collection. Though he had interest in Jawa bikes for over 10 to 12 years, the actual passion budded four years back when his uncle Kiriyamada Belliappa (now late), a Manager at Kanteerava Stadium in Bengaluru, gifted Leaven his bike as a wedding gift.

It was a love at first sight and he nurtured the passion by purchasing more bikes and upgrading them to original factory condition. He has not altered any bike in any way and all the mean machines are as good as factory finish as per the brochures – shining and raring to go.

READ ALSO  No Jawa revving on city roads this year

The Jawa type 360, 350 cc round bore twin, Penalka handle white colour 1970 model that he owns is an imported model and has never been launched in India.  India launched only 250cc bikes. Leaven has spent Rs. 10 lakh for five bikes and three more bikes are being upgraded with original factory parts.

“Yes, spare parts are difficult to get but if a craze-collector makes up his mind, parts can be imported even from Czechoslovakia (Czech Republic and Slovakia now). There are a few dedicated old dealers who still have Jawa parts. You must have an eye for them and they will get you the parts. Also, a collector buys parts for him to save for future replacements,” he said.

Most of the bike parts are made of metal and rubber. Plastic is not used and as such, there is less wear and tear. “I can easily ride the bikes that I own for the next 50 years. Such is the quality,” he confides.

“I am trying my best to involve the next generation to follow the two-stroke Jawa and Yezdi culture as these are some of the iconic bikes India had. Classic bikes are still ruling the roads in India, not only the vintage editions like the ones I ride, but reintroduced models carrying powerful engines and modern safety mechanisms. I am grooming my two-year-old son Lyon Devaiah to be a Jawa fan. And he is interested too,” Leaven added.

The deep maroon, black and white models and Mysuru registration plates have kept him company on many adventures. He has been participating in vintage bike events recognised world-wide.

“We grew up with these Jawas and now the next generation must take it forward. These bikes live on as long as you preserve them materially and in your memories,” he added.