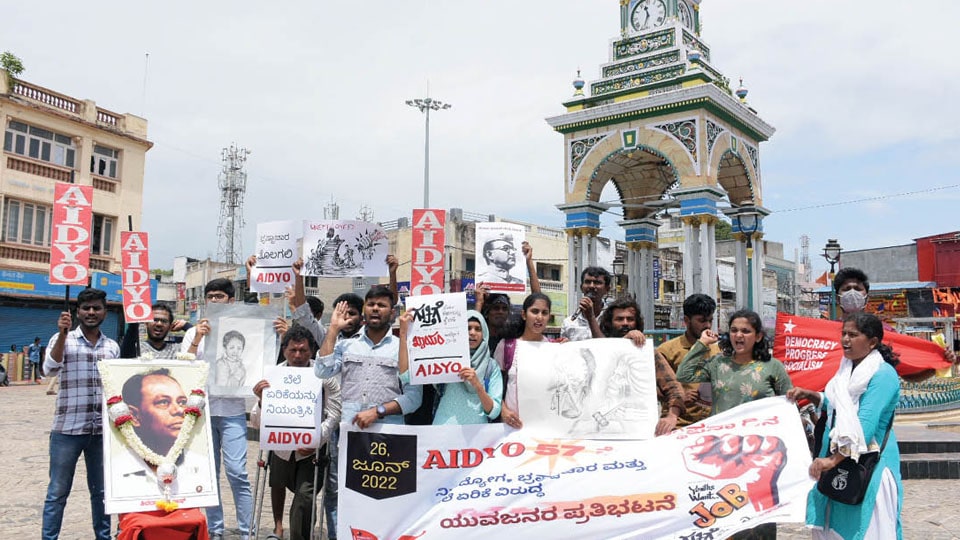 Mysore/Mysuru: Condemning the escalating prices of essential commodities, corruption and unemployment, members of All India Democratic Youth Organisation (AIDYO) staged a unique protest in front of Dufferin Clock Tower near Devaraja Market in city yesterday by holding ‘I will sign’ campaign.

Marking the 57th Founders Day of AIDYO, members of the organisation staged a protest after offering floral tribute to the portrait of AIDYO Founder     Shibdas Ghosh.

AIDYO District President T.R. Sunil stated that many people are ending their life due to the depression caused because of unemployment. “There are over a lakh vacant posts in various Government Departments, but the Government is not initiating to recruit people. Even though they come forward to recruit for a few necessary posts, there is corruption all over,” he said and expressed his outrage about the politicians who persuade voters, especially youths during the elections, later take voters for granted and reveal their true colours by failing to fulfil the assurance they had made earlier.

“By introducing various rules and regulations, the Government has made the common people suffer. Prime Minister who had assured of generating employment has not done anything. The prices of essential commodities have hit the ceiling where people are struggling to make a living while the Ministers and MLAs are demanding to hike their salaries,” alleged AIDYO Secretary Suma.