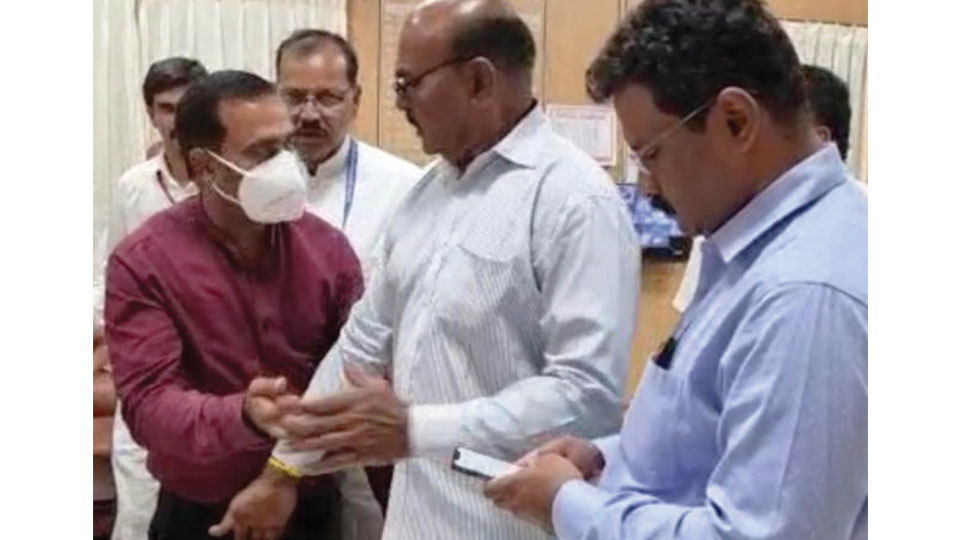 The person, who is said to have assaulted Dr. Natesh is Srinivas, a RTI activist and a resident of Bogadi in city. Dr. Natesh is said to have suffered a scratch on his left thumb and after medical examination at K.R. Hospital, he has lodged a complaint with Lakshmipuram Police, following which the Police have registered a case.

The Police, who have registered a case against Srinivas under IPC Section 353 (Assault or criminal force to deter public servant from discharge of his duty) and 504 (Intentional insult with intent to provoke breach of the peace) are investigating. Police said that the accused has gone absconding and steps are being taken to trace him.

Dr. Natesh, in his complaint has stated that a man, who identified himself as Srinivas, not only asked information which was not related to him but was also taking videos on his mobile phone. The office staff, who noticed Srinivas making videos, told him not to do so.

The complaint further stated that Srinivas began to hurl abuses all of a sudden and pushed the office staff on him (Dr. Natesh). Though other office staff tried to catch hold of Srinivas, he managed to escape.

It is learnt that Srinivas had earlier tried to threaten a few staff here and hence a complaint has been lodged with the Police, Dr. Natesh clarified.

According to sources, Srinivas, had submitted an application urging for a few information pertaining to MUDA. As he did not get adequate information on time, he is said to have come to MUDA Office at about 5.40 pm, yesterday to enquire about it.

Soon, wordy duel ensued between MUDA Office staff and Srinivas, who later assaulted. As loud commotion was heard from MUDA Commissioner’s chamber, the staff and public rushed to the chamber, stopped the fight and rescued Dr. Natesh, during which Srinivas escaped from the spot, sources added.