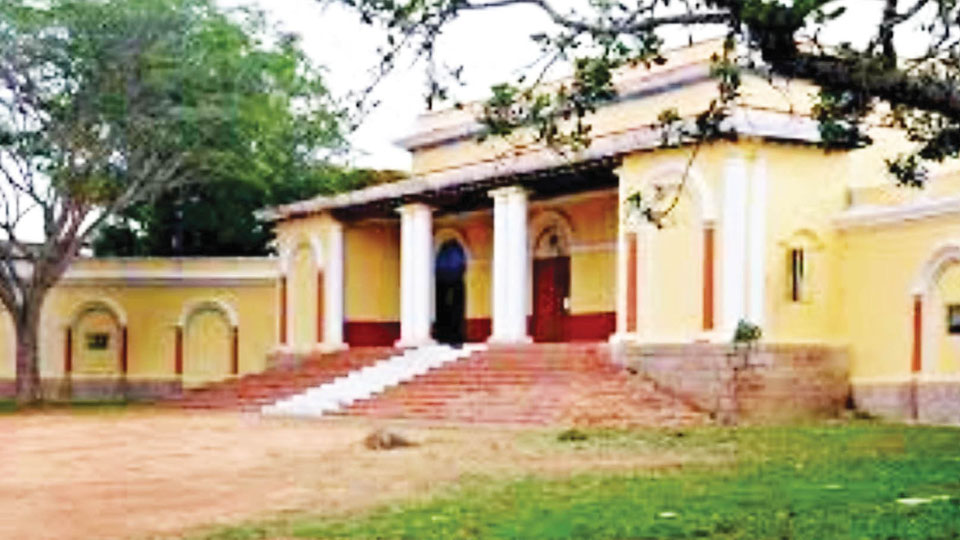 Last week I wrote about the philanthropy of Pandit Rajavaidya P.H. Chandrabhan Singh, one of the Royal Physicians of Mysore, in gifting away 32 acres of his agricultural land for the establishment of a school for rural children, way back in the year 1970. I also mentioned there that the Jawahar Navodaya School which now stands on that gifted plot of land, once used to function from the Aloka Palace near the village of Yelwal, very close to Mysuru, on the Hunsur Road.

In response to many queries from my readers about this place, I have decided to throw some light on this almost completely forgotten royal edifice. The existence of this place is almost unknown to present day Mysureans because it is tucked away from public view, completely surrounded by a wooded expanse of nearly 500 acres.

More appropriately known as the Yelawala Residency, it was built by Arthur Cole, the then resident of the East India Company, during the time of H.H. Maharaja Mummadi Krishnaraja Wodeyar, in the year 1806 a year after our Government House was built. It was meant to serve as a hunting lodge for the Maharaja and his guests and was designed on the pattern of a structure called ‘Kutra House’ in Ireland.

Cole’s successor Casamore is said to have stayed in it till the year 1840. The wooded area around it was where the royal guests used to indulge in the sport of pig sticking, as wild boars were in abundance there then, as they are even now.

To me, this is a place full of many happy memories from the days of my childhood, because it was the locale of many picnic lunches for our family. Since it lay in the path of our frequent journeys between Mysore, where I used to do my schooling and Chikmagalur, where I used to spend my holidays, it was always our preferred spot for some rest and refreshment.

In fact, as a child, I have explored every nook and corner of the sprawling bungalow which had some very interesting cellars and hidden rooms. It consists of a large central structure with two symmetrical attachments on either side, connected by two unusually narrow, curved corridors.

Gouri Satya, my historian friend, in his book, Mysore Memories mentions that these corridors were actually open, pillared pathways that were later walled up. In fact, his book is the only resource that gives a detailed account of this place, which otherwise finds very few references in the history of Mysore. The huge, single storied building has many large halls with glass panelled doors and windows and a roof supported by massive teak beams and rafters.

It has a quaint, spiral, wooden staircase which ends in a watchtower-like covered turret and leads you to the roof which is laid with rectangular terracotta tiles. I doubt if this staircase still stands there today because it used to creak pitifully in the days I used to stomp on it, more than fifty years ago!

On the whole, the entire place with its huge empty rooms, dusty floor, peeling walls, broken window panes, cobwebs and bat droppings, used to fit my imagination of a haunted place perfectly, which is why I was very fond of it.

Another little-known fact about the Aloka Palace is that this was where the Kashmiri leader Sheik Abdulla spent some time during his eleven-year detention by the Indian Government, between the years 1953 – 1964.

It is said that he penned a part of his autobiography ‘The Blazing Chinar’ during his stay here but surprisingly there is no mention about it in the book itself.

He had a tumultuous, love-hate relationship with our Prime Minister Jawaharlal Nehru which ended with his release just a few days before the latter’s death.

Today the whole area of the Aloka Palace is under the control of the Forest Department which has a forest training institute there. A couple of years ago there was an announcement that the place was thrown open to the public as a nature park but this does not seem to be the case now.

But if you are not scared of lonely, wooded places and if you decide to drive through the narrow road that traverses it, your headlights will most likely pick up a boar rushing across, along with an occasional jackal and many sprinting hares. If you go there by day, you will be delighted by the many peacocks and partridges you’ll invariably see, pecking away on the roadside. And, if you are a nature lover and lazy traveller like me and therefore decide to just stop for a long while and soak in the natural surroundings, you’ll be so mesmerised by the birdsong that you’ll never feel like coming away from the magical place!

5 COMMENTS ON THIS POST To “ALOKA: A completely forgotten Royal Retreat”