Home » Columns » American Dreams – 4: Halloween is not complete without pumpkins! 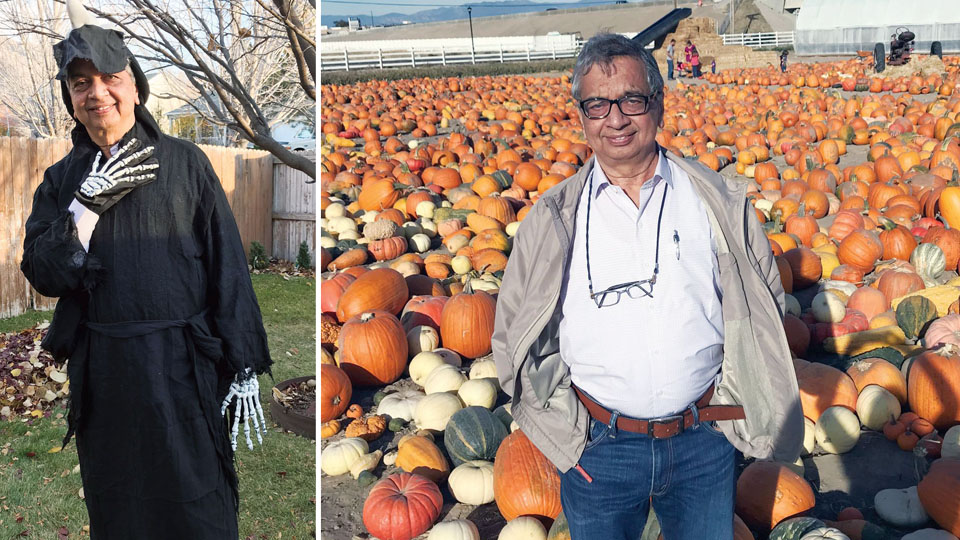 American Dreams – 4: Halloween is not complete without pumpkins!

I was always under a wrong impression that we Indians believed in bhootha, pretha, superstitions, ghosts etc., but I was in for a surprise on this US visit.  Westerners too believe on all the above as much as we do and the only difference is that they have mastered the art of marketing even bhootha and pretha,  by hosting the festival of ‘Halloween.’

October 31, the All Saints Day is celebrated as Halloween Day. The origin of this festival is hotly debated, whether it is of a Celtic origin or a Pagan practice but it is generally believed to be a Celtic festival based on the festival of Shamhain. The Day is celebrated with bonfires, costumes and feasting to ward of the ghosts. This day was earlier known as “All Hallows Eve” and is shortened as Halloween. It is believed that ghosts roam around on that day and the costume is to confuse them ! In some homes, they even place plates and food on dining tables to appease these ghosts; something like our own tradition of feeding the crows.

The tradition of trick or treat, practiced by children when they go from door-to-door started from Scotland. The children were supposed to get sweet in exchange for a poem or a verse. The children used to dress up as angels, demons or saints. But with the pop culture invading the cities, the dresses have undergone a sea change and the children come dressed up in the guise of all the latest comic heroes and heroines. The sale of these costumes start nearly one month in advance in select stores.

The atmosphere in the neighbourhood is like a mela, even new-borns or toddlers are dressed up and the parents go door-to-door carrying them. In case any house does not want to participate in this festival, they just have to switch off their front lights and nobody disturbs them. Many a families spend a lot for this festival. They offer a full bar of chocolates or even snacks like pop corn and hot chocolates to children when they come to the doorstep saying “trick or treat.” The best thing about this festival is that all people, brown, white or black, participate. Children as usual flock to homes which give the big chocolates.

Halloween is not complete without pumpkins. Carving pumpkins like jack-o-lanterns is an Irish tradition. Originally they used turnips and potatoes for carving but of late pumpkins are used extensively. The pumpkins are specially grown for this festival across the country in huge numbers. They come in all sizes, shapes and colours. Each house at least keep about 5 pumpkins decorated in front of their homes. For one month,  wherever one shops, one finds pumpkin cookies, breads, cakes and pudding all over.  What happens to all the pumpkins once Halloween is over? It is left to rot in the fields or fed to the cows!

The city also hosts a “Witches  Festival” during this period. It is estimated that each family spends about 75 to 100 dollars for this festival and so the total spend in America alone for Halloween is about 450 million dollars!