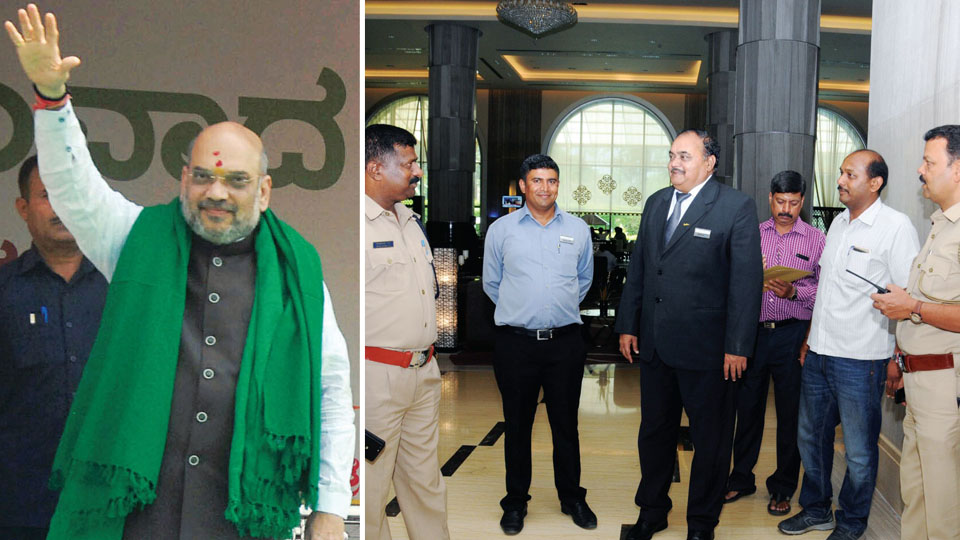 Mysuru:  Forty-four days to go for the ‘Battle for Ballots’ and political parties are leaving no stone unturned to woo the voters. Mysuru, the home district of Chief Minister Siddharamaiah, will be the focus for the next few days. While the CM will embark on a five-day tour of Mysuru district starting today, National BJP Chief Amit Shah’s plane will land at Mysore Airport in Mandakalli at 8.30 tonight.

The Assembly election is a big test for the ruling Congress ahead of Lok Sabha elections next year as Karnataka is the only big State where the ‘Grand Old Party’ is in power after losing a string of elections to the Bharatiya Janata Party (BJP). Besides BJP and Congress, Janata Dal (Secular) and a host of smaller parties are also in the fray. The old Mysuru region comprising Mysuru, Mandya, Ramanagaram, Chamarajanagar and Hassan, is electorally the ‘driest’ for the BJP as it had failed to win even a single seat in the elections that were held in 2013.

The BJP seems to be focusing on Mysuru and as if to prove this, both Prime Minister Narendra Modi and BJP chief Amit Shah have visited Mysuru.

Party sources said that there will be more visits by Modi and Shah in the coming days to wrest voters from the Congress and the JD(S).

After his arrival in Mysuru this evening, Amit Shah will stay at Hotel Radisson Blu Plaza. Shah is given ‘Z Plus’ security and the hotel has been sanitised before his visit.

A Police team led by Devaraja ACP Muralidhar, Nazarbad Inspector Krishnappa are camping at the hotel since this morning to ensure fool-proof security. The security arrangements are being supervised by Hotel Security Manager Ashok.

BJP has been making several strategies to make inroads into this Vokkaliga-dominated region. Amit Shah will begin “Karunada Jagruthi Yatra” tomorrow (Mar. 30) with a visit to Suttur Mutt in city where he will seek the blessings of Suttur Seer Sri Shivarathri Deshikendra Swamiji.

Next, Shah will visit the Mysore Palace and hold discussions with the royal family members (though the scion of royal family Yaduveer Krishnadatta Chamaraja Wadiyar has said that he was not aware of Shah’s visit).

Later, Shah will visit late Raju’s home in Kyathamaranahalli. Raju, an RSS and BJP activist, was murdered by miscreants in March 2016. Shah will next address a public rally “Navashakthi Samavesha” at Maharaja’s College Grounds at around 11 am.

Shah will proceed to Kollegal tomorrow afternoon and address a massive rally at National High School Grounds. From there, he will proceed towards Chamarajanagar where he will address “ST Samavesha” at Dr. B.R. Ambedkar Stadium.

The temple run of the BJP President will continue as he will visit Srikanteshwara Temple in Nanjangud at 6 pm and Ganapathi Sachchidananda Ashrama in city late in the evening. He will return to Hotel Radisson Blu.

On Mar. 31, Shah will address a press conference at Rajendra Kalamandira in Mysuru at 9.30 am and launch a couple of campaign vehicles. He will visit the house of farmer late Rajendrappa at Chennenahalli in Srirangapatna. Rajendrappa committed suicide due to crop loss. Shah will launch Mushti Dhanya Sangraha Campaign.

The BJP President will visit Cheluvanarayanaswamy Temple at Melukote in Mandya district at 12 noon, interact with the organic farmers in Mandya, address Shakti Kendra Pramukh Samavesha in Mandya, visit the Channapattana Craft Park and interact with the silk growers in Ramanagaram district.