Home » News » An art teacher with a midas touch 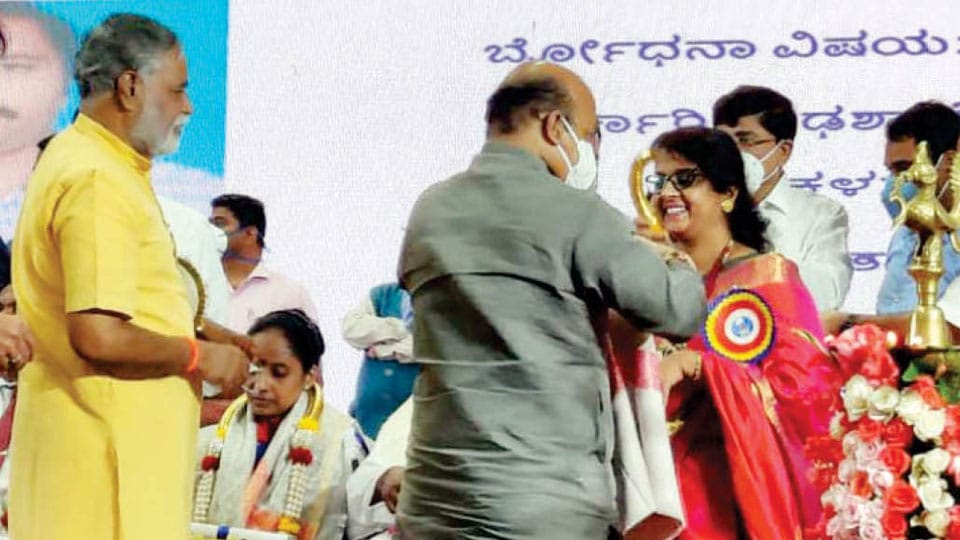 An art teacher with a midas touch

Mysore/Mysuru: Here is an art teacher in the city who is helping the Government School students who cannot afford colour pencils, drawing sheets, sketch pens and colours boxes. Not only this, the teacher even makes art out of unusable products and vegetables like bottle gourd, pumpkin and so on.

Meet K. Sangeetha, who has been teaching art in various Government Schools since 13 years. Recently, she was conferred the State-Level Best Teacher Award by the State Government. Many students trained under her have represented the State in National-level drawing and painting competitions.

Hailing from Karkala in Udupi district, Sangeetha completed her schooling till 12th standard in KGF. Later she moved to Mysuru and completed two years of painting course in Sri Kalanikethan College of Visual Arts.

She has participated in more than 30 painting camps like Voice of Colours held during 83rd Kannada Sahitya Sammelana, Wet Canvas at Chitrakala Parishat and in the State-level camp organised by South Western Railway.

Speaking to SOM, San-geetha said, “Teaching art for the students of Government Schools was a big challenge for me. Many students come from poor financial background and cannot afford expensive colours, pencils and sketch books. So I started providing all the related items to them. Later participation of students increased after they realised the fun of art and craft.”

“Also many students made art out of waste vege-tables and have won prizes in major competitions. The idol of presiding deity Chamundeshwari made of clay has won the prize in a State-level competition. I request the State Government to appoint an art teacher in every Government Schools in order to encourage students towards art and painting,” she urged.