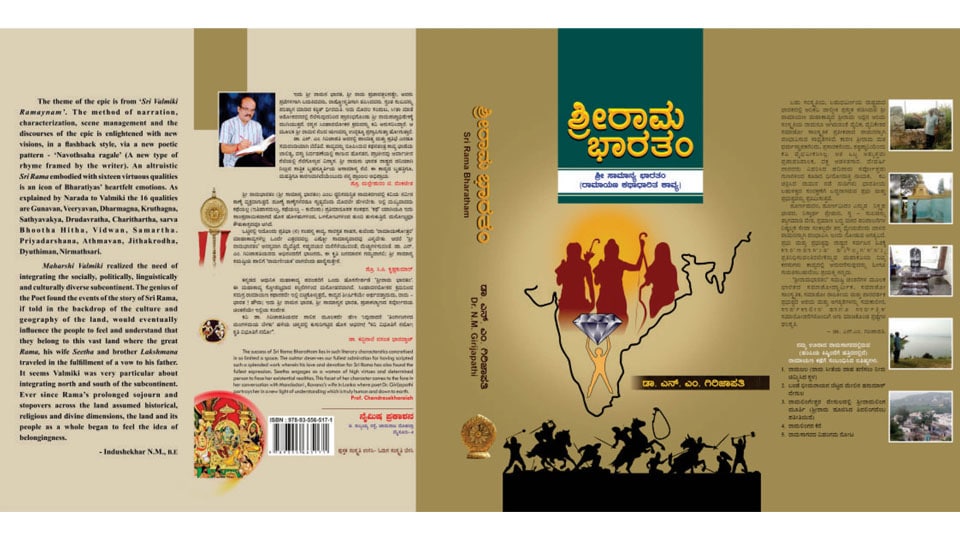 An epic of new dimensions

I heard in disbelief when Dr. N.M. Girijapathi first revealed that he has composed a narrative poem of epic proportions in Kannada based on the story of Sri Rama of Valmiki’s Ramayana. My skepticism was actually the result of my ignorance of Girijapathi’s profundity as a scholar and poet.

The title of the work persuades our conscience to recall Mahabharatha of Vyasa. I think he has titled his work deliberately and it is probably the first ever attempt to do so in Kannada. And so titling his ambitious work as ‘Srirama Bharatham’ two epics of our land — Ramayana and Mahabharatha — he deals with two great documents unveiling our history, religion, philosophy, culture and people together with their authors’ viewpoints as to the purpose of human existence in general.

Both Valmiki and Vyasa envisioned a life sublime for both the ruler and the ruled. They put forth such values and principles so that they stand out with examples and illustrations with an aim of retaining their relevance down the ages.

We need to study Girijapathi’s work from this point of view for its clear understanding and appreciation. We need to reiterate ‘that the guiding principle that prompts us to feel for others good’ and well-being was the source of inspiration for Valmiki and similarly he denounced the negative value ‘na adharmah’.

It was Valmiki who visualised the concept of Ramarajya realised through his hero Sri Rama who has been hailed as a complete man and perfect ruler. And there is a deep suggestive meaning in Girijapathi titling his work ‘Srirama Bharatham’ and his writing justifies this title in more ways than one.

Girijapathi could have penned the work in greater detail bringing out the nuances of the story analytically. At the same time he might prefer this laconic approach keeping in mind the modern reader’s apathy and complaint, ‘no time to read much!’

The book is designed and conceived in the format of reminiscences of the past using the technique of ‘flashback’. This technique minimises the narrative while maximising impact on the readers.

The book can be read in one sitting if one is determined to do so and it can be done without feeling fatigue or boredom. The readability is excellent. Its visual effect is comparable to that of having seen a good movie since the events or incidents in the story start unfolding in quick succession as they do in films.

Kannada here is emotive, intense and scholarly, rich in descriptive texture and musical if read aloud. Its success lies in such literary characteristics concretised in such a limited space. The author deserves our fullest admiration for having scripted such a splendid work wherein his love and devotion for Sri Rama has also found the fullest expression.

Dr. Girijapathi’s work is a story told in 10 chapters and is unveiled in Kannada’s most popular meter-free verse, in which the poet has remodeled it and named it as ‘navothsaha ragale.’ The story begins in Lanka where both Rama and Ravana envision in their dreams before they confront each other in the battleground. It ends with the coronation of Rama in Ayodhya after the war with the end of Ravana. The two stand starkly contrasted representing two opposites — good and evil. Dr. Girijapathi’s narrative skill offers a visual treat.

The book demands a multilayered study to under-stand and appreciate its profound impact on the readers. It is a welcome addition to the classical epic poems of modern times in Kannada.

As a powerful parallel to Sri Rama’s character, Seetha engages as a woman of high virtues and determined to face her existential realities. Women in this work seem to have occupied better space in terms of being better understood and dealt with in fresh perspective and approach. The readers of Ramayana know that a single villainous act of Manthare was the root cause of all that happens in the life of Rama and Seetha. But taking into account the life of Manthare’s mother and the circumstance of her birth, Girijapathi justifies that springs a surprise in the portrayal of her character.

Manthare describes herself as not Manthare, but ‘Manvanthare’ harbinger of a new age. This sounds quite ominous, or shall we say prophetic? Dr. Girijapathi’s treatment of Manthare’s character as an instrument of change is both convincing and suggestive.

Dr. Girijapathi is quite well-known among the contemporary writers in Kannada. He is famous as poet, short story writer, folklorist, playwright, essayist, and also translator. His research papers have been acclaimed as authentic and his contribution to other forms of literature is termed by many as significant.

Awards and recognitions have come to him in good numbers unsolicited, a fact to be noted in these days when people, though not all, are running after honours and awards. In this respect Dr. Girijapathi is a rare kind of poet, unassuming and unpretentious.

He hails from Ramasagara village in Ballari. He was born on Dec. 17, 1966 to Somashekhara Swamy and Vishalakshamma. He completed Ph.D in vachana literature. He currently works as an Assistant Professor in Kannada in a private college.