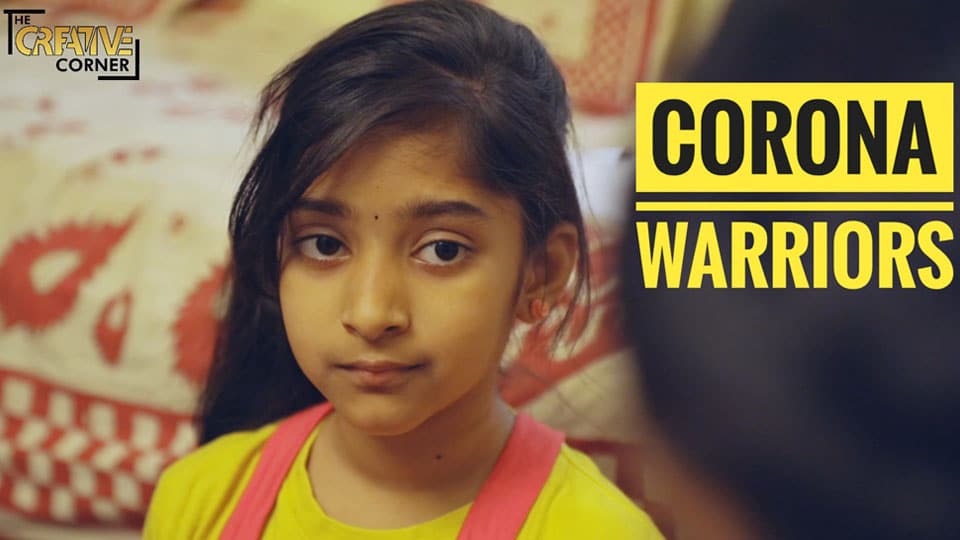 An ode to frontline fighters

If you think sitting at home, following the guidelines of lockdown set by the Government is tiring, imagine the plight of doctors, Police personnel and others in the essential line of services, who are working tirelessly day and night, risking themselves and their families, to keep you and your family safe amidst the ongoing pandemic.

These frontline fighters have no choice but to serve the nation and the public so that the nation regains normalcy at the earliest. And the best thing we public can do is listen to these frontline Corona warriors and stay home, stay safe and stay healthy.

With these in mind, city’s Suthan Dileep, short film maker and a resident of Srirampura, has made a short-film (4 minutes, 30 seconds) titled ‘Corona Warriors’, under the banner ‘The Creative Corner.’

Suthan Dileep is presently working with the Digital Department of the District Administration where he and his team have volunteered as ‘Corona Warriors.’ The team has already made short films and uploaded them on YouTube under ‘Corona TV – Corona Thamma’ stressing on the importance of washing hands, social distancing and strictly following the rules of lockdown.

The team has also made short films for the District Administration’s Facebook and Instagram ‘Fight against COVID-19’pages to help create awareness amongst the public on the importance of social distancing, using hand sanitisers and how to engage children at home during the lockdown. All these videos have gained huge popularity and a lot of views. The team has to its credit, a placard campaign with the message, ‘I am at home, safe and you too stay home, stay safe.’

The opening scene of the short-film, ‘Corona Warriors’ shows a family of three, father, mother and a daughter, inside their house amidst the lockdown, playing ‘Chowkabhaara’ (ancient Indian game). Then, a neighbour’s kid joins them and they continue the game. Then, the man of the house, a Police Officer gets a call from the Dy.SP to come to Office immediately and he leaves. Then the mother, a doctor also gets a call to urgently rush to the hospital.

They bid adieu to the daughter and head towards work. Then the boy’s mother comes and drags her son of out the neighbour’s house and takes him home leaving the daughter all alone. Then a few days later, the daughter starts showing symptoms of Corona and the parents are in complete shock. The mother, looking at the symptoms of her daughter rushes towards her, but then the father, even during such tough times, showcasing pragmatism, asks his wife to first wear mask and then tend to their daughter.

The movie is a dedication to all these frontline warriors of Corona, especially Police, doctors, nurses, staff in the Health and Sanitation Department, District Administration, who in spite of being aware of the risks, are stepping out of the comforts of their own homes to serve the nation and its citizens.

The short-film has a total of five artistes. The role of the father is played by Pradeep, a software professional, that of the doctor is played by his wife Meena Shantha, a journalist in real life and their daughter Disha, a class V student. The family actually resides in Rajarajeshwarinagar in Bengaluru and were here in Mysuru on a visit to Meena’s mother’s house and ended up extending the vacation amidst the lockdown.

The neighbour’s role is played by Sowmya Kulkarni, who is actually the wife of a doctor and that of the kid is played by I Std. boy Harsha. Although none of them are from any movie background, their acting is worth a watch. Even though the movie has no dialogues, the message is conveyed in a very effective manner.

The movie director, Suthan Dileep, talking to ‘Star of Mysore’ said, “It took me just around 3 hours to film the movie and 20 hours of editing work. This movie is dedicated to those working in the frontline as Corona Warriors, including Police personnel, doctors, nurses, Home Guards, Government staff, Banks, Post Offices and other Departments.”

“They too have families, but as a call of duty, come out of their houses and serve us. That is why I chose this as the theme for the movie. Hope the people understand the importance of staying home and staying safe by ensuring social distancing and practicing proper hygiene. This gives the Government the scope to flatten the curve to a large extent and help save lives too,” he added.