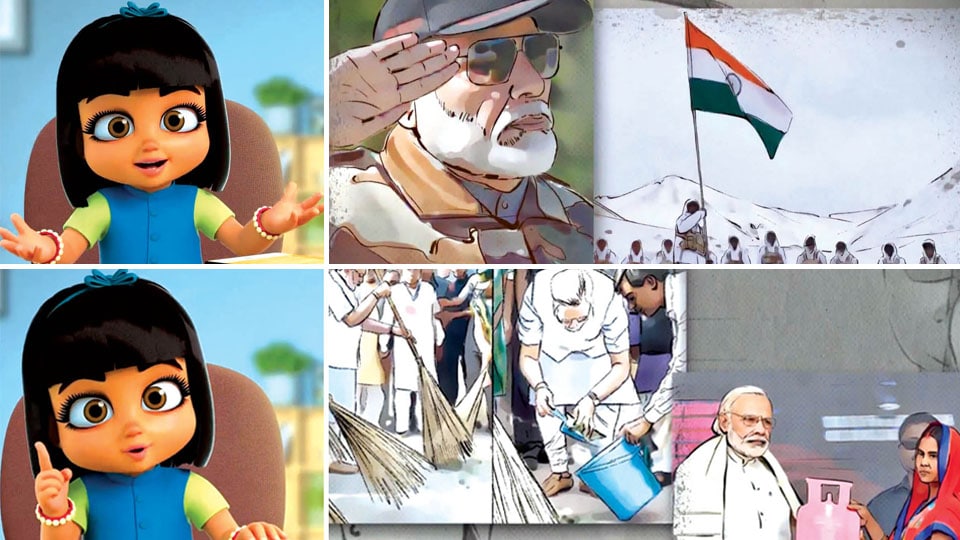 Mysore/Mysuru: While the entire nation wished a happy birthday to Prime Minister Narendra Modi, AUM Animation Studio has released a 2-minute video, second in Choti Chethana series where the life story of Modi and his achievements during 2019-2020 is narrated through animation and audio.

Earlier too, AUM Animation Studios Pvt. Ltd., Mangaluru, had created a one-and-a-half minute awareness video which spoke about the necessity of lockdown and about respecting Corona Warriors. Brother of MLA S.A. Ramdas, S.A. Shrikanth Das is the Managing Director of this Studio and his wife Prathibha Shrikanth is one of the Directors.

The second in Choti Chethana series released yesterday traces the life history of Modi who had humble roots and whose life was full of struggles. The video traces the history from his birth in 1950 till he assumed power as PM and headed the world’s largest democracy. It shows how a common man can rise to power with sheer hard work and dedication.

The animation video talks about Modi’s vision of nation building and laying a strong foundation to future generations. It also speaks about many people-friendly policies launched under Modi’s leadership in 2019-2020. As the music plays in the background, photos of Modi and many aspects of his life are displayed in the background.

In fact, the Choti Chethana animation video was telecast in almost all TV news channels, national and regional. It has got appreciation from the Prime Minister’s Office for the novel idea.

Speaking to Star of Mysore, Shrikanth Das said that the family has been wishing Modi on his birthday since the last 20 years. “Our first animation video released in April this year on lockdown theme was well received and even the Prime Minister was happy about the creative, the theme and social message. We wanted to do something different with Choti Chethana and we highlighted the achievements of Modi during 2019-2020,” he said.

AUM Animation Studios was started in 2012 in Mangaluru. “Once the achievements were listed, we fitted them with music, audio and visuals. “Even this 2-minute video has caught the attention of the Prime Minister and this has been conveyed to us by his good offices. Modi has appreciated the out-of-the-box idea that was showcased on his 70th birthday,” Shrikanth Das said.