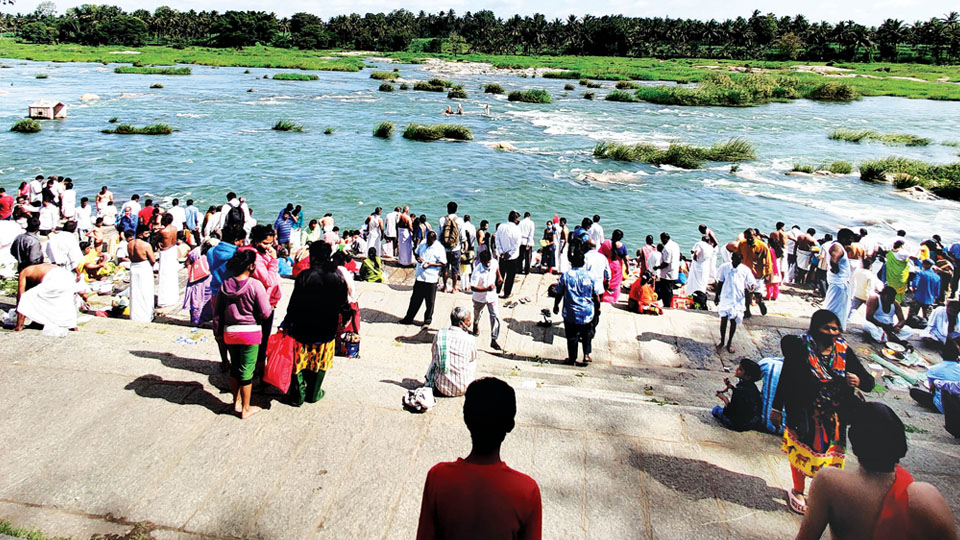 Srirangapatna: As part of Mahalaya Amavasya, thousands of people from different parts of the State and neighbouring States, performed Pitru Paksha rituals including Pinda offering to their deceased elders at Paschimavahini where River Cauvery flows near Srirangapatna yesterday.

Srirangapatna is one of the most sought after place in South India by people who seek to perform Pitru Paksha rituals on Mahalaya Amavasya day.  Apart from Paschimavahini, a number of people also gathered at other spots in the surroundings of the town such as Ganjam, Gosai Ghat and Cauvery Sangama. The priests of the town were busy guiding the people on the performance of associated rituals, offering of Pinda and immersion of ashes.

Meanwhile, amidst the rush to the river banks, people seemed to have forgotten COVID-19 precautionary measures that are in place to stop the spread of the pandemic. People were seen giving a go by to maintenance of physical distancing and wearing of face mask. Even the authorities failed to ensure implementation of COVID-19 regulations at Paschimavahini and other spots on the banks of River Cauvery.

The Srirangapatna TMC charged Rs.100 at the entry of the Bathing Ghat arena for allowing performance of rituals.

Veteran actor and Director Dwarakish performed Pitru Paksha rituals at Paschimavahini under the guidance of priests.

As thousands of people from various parts of the State thronged the historic town of Srirangapatna, there was heavy density of vehicles on Mysuru-Bengaluru Highway yesterday. Due to the high number of vehicles, there was traffic congestion in the surroundings of the town and haphazard parking of vehicles only compounded the problem. The Police had a tough time in regulating traffic.