Home » Feature Articles » Anna Bhagya: Government needs to view this Scheme as a critical tool to fight against poverty 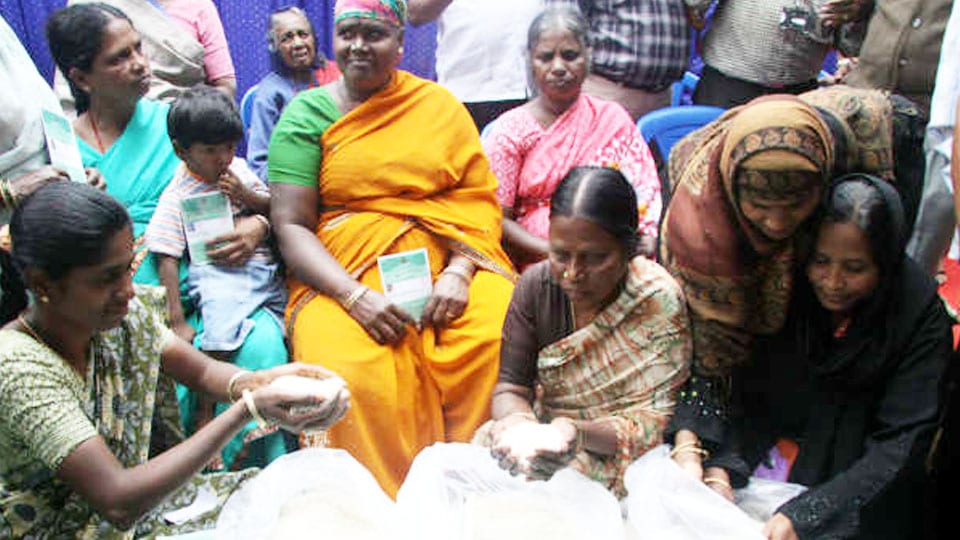 Anna Bhagya: Government needs to view this Scheme as a critical tool to fight against poverty

Under this ambitious programme, the Government is supplying food grains free of cost to priority households across the State.  A total of 108.98 lakh households holding either Antyodaya or BPL cards are eligible for the same.  Antyodaya card holders are eligible for 35 kgs of grains while each BPL card holder will get 5 kgs of grains per unit.  Providing free cereals will surely go a long way in addressing the problems of calorie malnutrition while the addition of 1 kg each of palm oil, sugar and iodised salt to the grains further helps. This scheme is critical in addressing issues of hunger and food insecurity, especially for the poor.

In most developing countries, people spend only around 8-10% of their incomes on food, while a typical poor household in India used to spend upto 70% of their income on food.  Apart from the uncertainty that unstable incomes create, the poor had very little money left over for fulfilling other needs after spending such a large share on food itself.  With food now being free or at a very little cost, the poor can re-deploy their freed up incomes for other gainful activities.

Prioritising alternate productive deployment of wealth occurs only when there is adequate awareness, access to gainful employment, financial inclusion into the mainstream economy and saleable skills amongst the poor. Ensuring food security without a comprehensive programme to complement the Anna Bhagya Scheme with these interventions will not have the necessary impact.  The Government needs to view the Anna Bhagya Scheme not just from the perspective of food security, but as a critical tool for the fight against poverty itself.

While the Government’s efforts in procuring and distributing large quantities of good grains month after month is laudable, we cannot ignore many systemic challenges that continue to exist.  Even after half-hearted efforts at cleaning up ineligible and ghost cards, we are yet to ascertain the real poor.  What we need to understand is having nearly 1.09 crore out of a total of 0 to 1.3 crore households labelled as ‘priority’ sends out the message that Karnataka is actually steeped in poverty.

While the poor deserve all the attention and support, it would be difficult to justify how 83% of Karnataka can claim benefits that rightly belong only to the poor.  What this does is to take away subsidy from the deserving poor and re-distributing it amongst the undeserving rich. The State needs to come out with a clear poverty identification mechanism and focus on tackling the food security issues amongst this population only.  This will not only give the State additional resources, but a smaller and more compact programme can be run both efficiently and effectively too.

The report that I had submitted to the Lok Ayukta as the Special Investigator showed the annual economic loss due to leakages and corruption in Karnataka’s PDS around Rs. 1,737.6 crore. The Department had initiated several steps based on the recommendations made in this report but seems to have now lost steam midway. Unless the leakages are plugged, precious resources meant for the poor will again be siphoned off by the rich and the powerful.

The Department of Food and Civil Supplies is mandated to manage the existing programme each month through an elaborate system of procurement, storage, transport and retail distribution through nearly 20,778 Fair Price Shops located all across the State. The Department is inadequately staffed especially at the lower levels. Usually one Food Inspector located in the Tahsildar’s Office is expected to oversee and monitor close to 100-150 Fair Price Shops. One glance at the job description of the Food Inspector which mandates him to do cursory and detailed inspections of a certain number of Fair Price Shops in his jurisdiction will itself show how impossible his task is. This has naturally resulted in poor or no monitoring of both the wholesale and retail outlets at the grassroot level.

READ ALSO  Water: Whose business is it anyway?

Fair Price Shops are the ‘last mile’ in the distribution chain and are the face of the Scheme. Apart from problems of billing and stock disclosure, they are beset with other issues as well. Despite the government introducing the Padithara Khatri Yojana, these shops function for a few hours for a mere 3-4 days each month and most shopkeepers complain that they can ill-afford to keep them open throughout the month for the kind of paltry commission given to them. The Fair Price Shops are treated as political doles and are designed to be economically unviable. This gives the shop owners the rationale and incentive to resort to pilfering and short-changing their customers.

The State Government should realise that unless a systematic and sustained effort is made to build a responsive, responsible and effective delivery mechanism, its desire to provide food security to the people of Karnataka will only remain a dream and a short-sighted political tool. The enthusiasm of the State should not be restricted to merely sourcing markets, ensuring procurement and making budgetary allocations, but should also focus on correcting the flaws in the existing system. Otherwise the programme may end up as another ‘cash cow’ for a corrupt and inefficient system to milk at the expense of the common man.