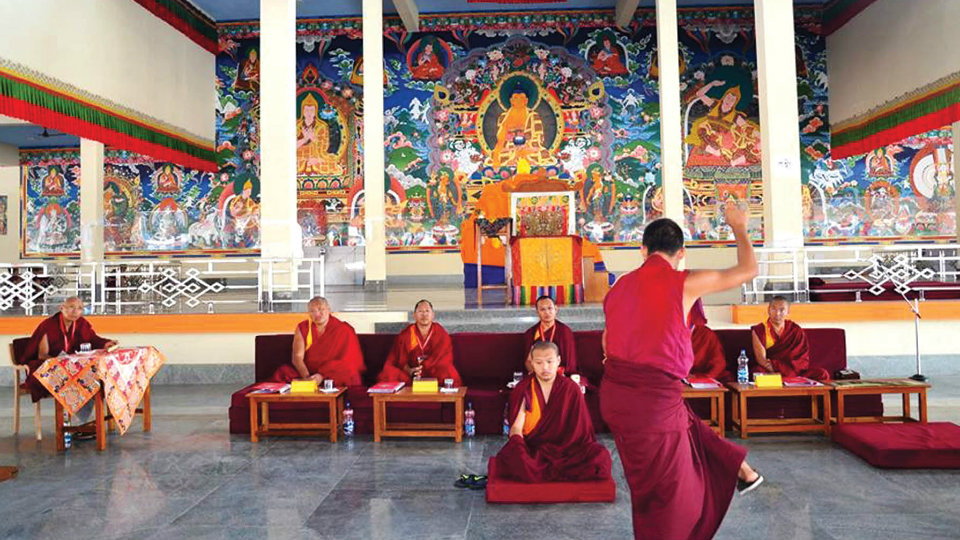 Bylakuppe: Tibetan monasteries have a different way of education and conducting exams. This is the season of annual exams at Seramey Monastery in Bylakuppe and it is conducted for five days. Over 1,500 monks are appearing for this year’s gruelling tests.

Geshema is a Tibetan Buddhist academic degree for monks and nuns. The degree is emphasised primarily by the Gelug lineage, but is also awarded in the Sakya and Bön traditions. The Geshema degree is the same as a Geshedegree, but is called a Geshema degree because it is awarded to women.

The Geshema degree (or Geshe degree for monks) is roughly equivalent to a Ph.D. in Tibetan Buddhism. This highest degree was, until recently, only open to men. This year, however, more than 100 nuns are appearing for the exams.

It takes 21 years of study to earn a Geshema degree. Nuns must study the Five Great Canonical Texts (Shungchen Kapoe Nga) for 17 years in their respective nunneries. After successful completion, they enrol for a four-year course for   earning the degree.

The Geshema-qualified nuns are paving way for other nuns to follow their footsteps. This degree will make them eligible to assume various leadership roles in their monastic life. Each morning from 9 am to noon, they complete their written exams and after that in the afternoon they indulge in debate in front of examiners.

The examinees are tested on the basis of philosophy, a major subject. The nuns taking their first and second year exams are being tested on the perfection of wisdomwhile in the third year and fourth year, they are tested on Vinaya and treasury of knowledge.All the exams consists of debate sessions and sessions on Tibetan grammar and science.

The final year exam consists of science and history and candidates are expected to submit a 50-page dissertation and later they are examined on the basis of their dissertation during Geshema exams. The Geshema examiners have come from four different Tibetan monasteries and the examination process is headed by Geshe Tsering, the head monk of Seramey monastery.