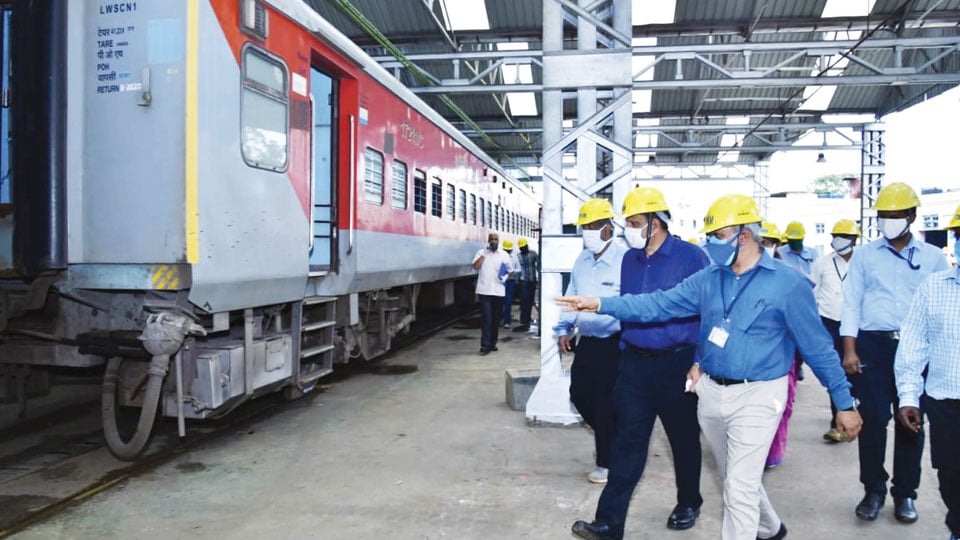 Recently, the Workshop has successfully manufactured High-speed MEMU motor coach wheel that is fit to run at a speed of 160 kmph. This wheel manufacturing is undertaken for the first time in Indian Railway Workshop against M/s Bombardier quality plan.

Sujata Singh, President, SWR Women’s Organisation, inaugurated Heritage Pillars at the Workshop. These two Heritage Pillars were casted in Mysuru Workshop in the year 1939 for Mysore State Railway (MSR), which was found recently. To give them a place of pride right at the entrance of the Workshop, these two pillars have been aesthetically erected with 2 metal insignias emblems of Southern Maratha Railway (SMR) and of MSR.

A fountain between these two pillars was also inaugurated which will significantly improve the ambiance of the Workshop and will also inculcate heritage consciousness in the staff.

A portrait of the Mysore Maharaja was also unveiled during the occasion. The specialty of 3D painting is that the person in the painting will be seen looking at the viewer from any angle of viewing. Even the direction of footwear of Mysore Maharaja will appear pointed towards the viewers. Mysuru Workshop was established in the reign of Nalwadi Krishnaraja Wadiyar. His many accomplishments resulting in all-round development of Mysore Kingdom, crediting many firsts in India are well-documents besides the portrait.

SWR GM and Officers of Headquarters visited Nakshatra Vatika (a conceptual Garden) and a Nursery garden for small plants developed by the staff from Planning and Progress section. A total of 18 saplings were planted by GM, PHODs, DRM and CWM during the occasion. The Refusal Yard, Bio Tank Cleaning Area, Carriage Body Repair Shop & Paint Shop, LHB Spring Shop and Carriage lift shop were also inspected by the team of officers from SWR/ HQ.

Hydraulic Press (8T capacity) for pressing in/ out the primary suspension unit used in LHB bogies manufactured by Mysuru Workshop was inaugurated.

Chief Workshop Manager P. Srinivasu gave a presentation on the performance and achievement of the Workshop.

Ajay Kumar Singh distributed awards to the officers and staff of the Workshop for their performance during the previous year and up to September this year. The SWR GM later interacted with members of Recognised Trade Unions and staff of Workshop. Singh commended the efforts taken by Mysuru Workshop in housekeeping and well-documented files and records. He also appreciated the performance of Mysuru Workshop in producing Zero en-route coach failures and failure of components within 100 days.