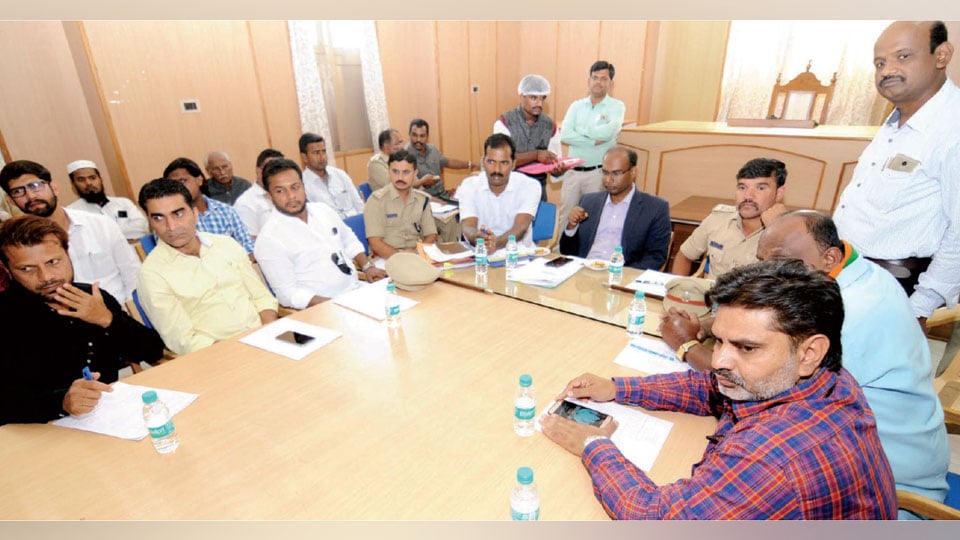 Mysuru: The District Administration is making all arrangements to celebrate Tipu Jayanti on November 10. The leaders and Muslim brethren who had gathered to discuss about the celebration felt that all religious leaders should be invited and permission to take out a procession must be granted.

The meeting was held here yesterday at the Court Hall of  the Deputy Commissioner’s (DC) Office under the Chairmanship of the DC, where several other suggestions and demands were also put forth.

DC D. Randeep speaking at the meeting said that Tipu Jayanti will be celebrated meaningfully at Kalamandira on Nov.10. The celebration will be inaugurated at 11 am and if there is any suggestion then people could come forward with it, he added.

A few Muslim brethren speaking later said that since Nov. 10 happens to be a Friday the inauguration time of 11 am clashes with the prayer time and hence, the celebration should be postponed to 4 in the evening. Ayub Khan also felt that it would be the correct decision.

Reacting to the suggestions, Randeep said that the Government had fixed Rs. 75,000 for celebration and there is no time to request for more grants. However, regarding the timing, the matter will be discussed with the District Minister and a decision would be taken, the DC added.

Opportunity for procession: Even last year permission had not been given to take out a procession. Tipu was a secular ruler and taking out a procession was an ideal way to reach his ideals and thinking to the people. Hence, at least this time permission should be given for the procession, urged Sarva Jananga Hitarakshana Vedike President Venugopal.

DC reacting to this said that Government had not mentioned anything about the procession in its order to celebrate Tipu Jayanti and added that a decision will be taken after discussion with the government.

Invite all religious leaders: Many Muslim brethren strongly felt that inviting leaders from all religious faith would be very meaningful. A decision was taken to invite them at the meeting.

SP Ravi D. Channannavar said that all arrangements had been made by the Police to celebrate Tipu Jayanti peacefully. The celebrations at the Taluk-level will be held under the Chairmanship of the respective Dy.SPs.