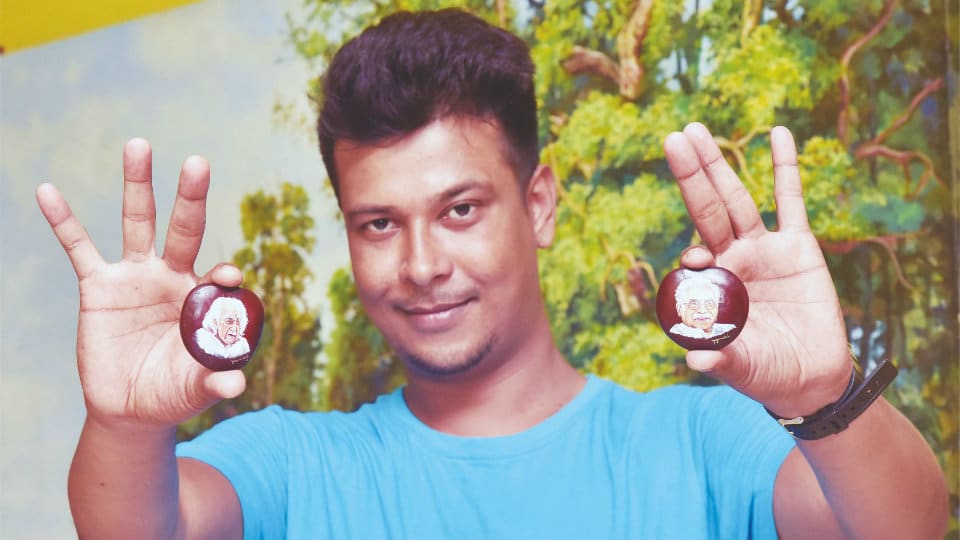 Yoganand, who is known for his creative works, calls this art as ‘Oil Colour On Seeds’ and this work blends a unique combination of oil colour and ‘Bauhinia’ seeds which is only found in India’s Western Ghats.

A person who loves travelling, Yoganand says that he found ‘Bauhinia’ seeds at Hysodlur, close to Gonikoppal in South Kodagu. The moment I saw the flat seeds, I was immediately attracted. Then I went in search of such seeds and local Jenu Kurubas (tribals) took me into the forest and I could collect some 19 seeds. It was wilting season for ‘Bauhinia’ and I had to collect fallen seeds,” he adds. 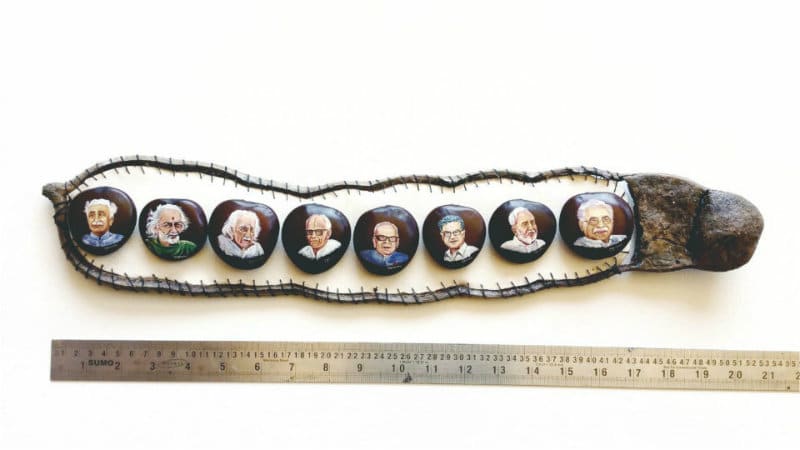 So what made him paint on these seeds?

“I was working on a project sometime back where I had painted some seeds on canvas. There I got an idea of painting on seeds. But unfortunately I had not laid my hands on seeds. That thought rekindled when I saw these ‘Bauhinia’ seeds and I began painting on them after I modified small brushes.”

On his choice to paint Jnanpith awardees, he said, “The first portrait that I created on the seed was that of Da.Ra. Bendre. As I finished doing that, I felt that I should do a series of paintings and that is how a Jnanpith series came to my mind.”

“I first tired with acrylic colours but it did not work and then I tried with oil paint. It took almost a month for me to complete the series as oil paint dries very slowly,” says Yoganand. 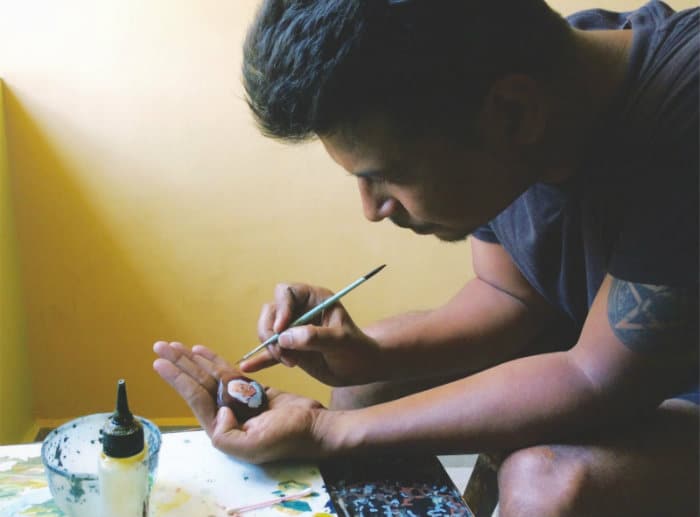 On micro art, he says, “When I was doing my foundation course at Chamarajendra Academy of Visual Arts (CAVA), I was not even in a position to buy sheets at times to work. So I used stamps and did landscapes on that and I enjoyed it. I had even given a few of my works to my friends who appreciated the work. I could not take much photographs of my work then and that is the reason why my micro art has not been documented. But now I am trying to collect pictures of those old works.”

About preserving these works, Yoganand said: “I wish to donate my micro works to Dharmasthala Museum as they can be documented and preserved.”

Yoganand has even tried his hands in advertisements. He has got good response for his concept and direction to create an advertisement with Gaddappa of ‘Thithi’ fame — “WHAT’S YOUR PROBLEM when Gaddappa is running in Royal Mysuru Marathon.” He is currently working as a freelance art director. He lives with his parents Lakshmaiah (an employee at KSIC) and Manjula (homemaker) at Vijayanagar. 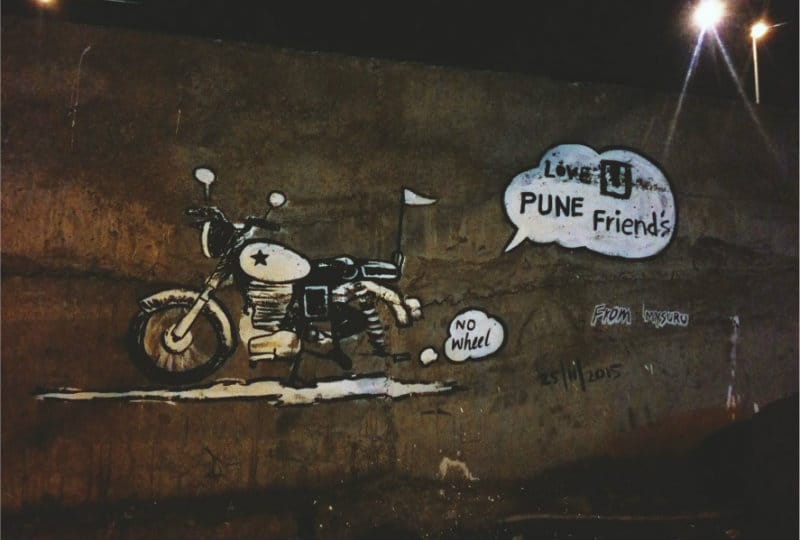 An alumnus of Jnanagangothri, Maharaja College and CAVA, Yoganand is also an athlete. He met with an accident in 2010 when he had just completed his MFA from CAVA. He was severely injured on his right knee and was operated upon. He was unable to walk.

Doctors then advised him to take up swimming so that he can recover. “Initially I swam to recover from the injury. I then participated in three-hour marathon swimming. At first I covered five-and-a-half kilometres and then increased by a kilometre every time I participated in the contest. I received couple of prizes too and I have run a couple of marathons including Royal Mysuru Marathon,” he says.” 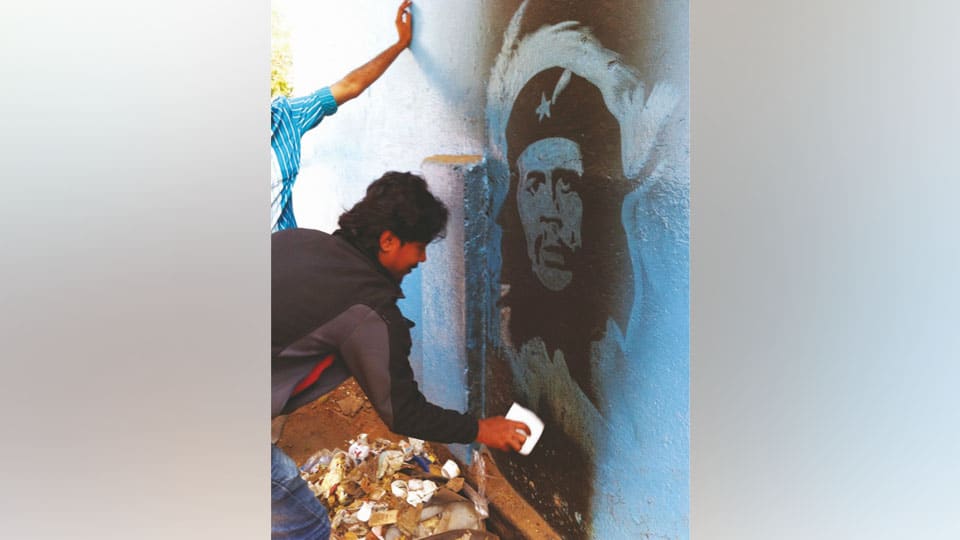 Yoganand loves travelling and he makes sure that he leaves a mark on that place with his art. “When I travelled to Mumbai with Shaggy, my other artist-friend, I painted on the streets and I got good response from Mumbaikars which inspired me to take up more street paintings. I have done a couple of works in Mysuru as well,” he says. Yoganand likes to create illusion art.