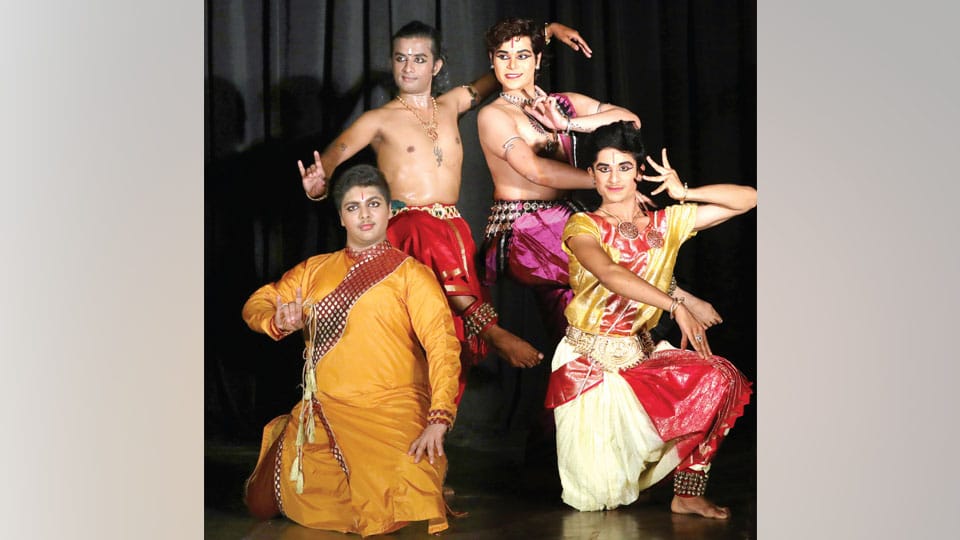 The Articulate Festival-36 on May 19, at Veene Seshanna Bhavana in Kuvempunagar, Mysuru, witnessed a test of testosterone. The four artistes who descended onto the stage, in turn, presenting four different Classical Dance forms of India proved, beyond doubt, that Classical Dance is not prerogative of women, even men can dance like a man, of course with the inevitable touch of estrogen, for dance is a fine art. Male dancers came from Trivandrum, Rourkela and Bengaluru, with pride did they dance and found a place in the hearts of the rasikas.

Kalidas S. Panicker, currently tutored in dance by Guru Kalakshetra Jisha Raghav, set a divine ambiance with his Bharatanatyam opening act of Kumara Kouthvam, “Saravana Ponthadathil” in chaste Tamil. A composition of Madhurai R. Muraleedharan, set in Ragamalika and Aadhi Tala. Kalidas treated the prekshaka with a Vyasaraya Kannada kriti “Krishna Nee Begane Baaro” in Yaman Kalyani and Mishra Chaapu Tala in his concluding performance. Both the numbers were choreographed by the artiste himself.

Kalidasa’s understanding the nuances of Bharatanatyam was very much in evidence in his geometrically precise movements that gave a very good first impression as soon as he took the stage. Synchronous movement of his eyes and body along with very meaningful hastas effectively communicated the bhava of the chosen sahithya. Not keeping to mere Kouthvam, Kalidas linked the charanas interestingly making the item a full-fledged composition.

He did succeed in arresting the attention and bring out smiles in the patrons of dance art.

Nishant Panicker carried the spiritual aura forward with his Kathak rendition. Disciple of Guru Vibha Ramaswamy, he began  with  Sri Adishankaracharya’s Shivapanchakshari Stotra and ending with excerpts from Maharaj Bindadin’s Ashtapadi “Niratata Dhang,” he placed a technical dance number in Dhamar Taal in between.

Nishant’s  big size did not hinder his performance ability. His nrutta, especially in the second of his item, was as mercurial as Kathak needs to be. The chakkars and footworks was so well-executed that he seemed to never set his foot on earth.

Shamanth S. Rao, with his performance, gave a short respite to the otherwise evening’s spiritual flow with his effervescent display of his histrionics in Kuchipudi. Disciple of Guru Dr. Sanjay Shantaram, Shamanth presented in his first segment, an ode to Lord Ganesha set to a very unique Ganapathy Tala and was in Raga Malike and in his second, he performed a Tyagaraja Krithi “Yela Nee Daya raadhu?” in  Athaana Raga and Aadhi Tala.

Shamanth, in both the dance numbers, danced with abandonment to an already very chirpy style of Classical Dance. His quick paced movements with very precise angas was like the sprightly deer in spring.  Weather it was in the Ganesha Tala or in the abhinaya to Tyagaraja’s krithi, he emoted very well and in accordance to the dictums of the dance form. A very promising artiste indeed.

READ ALSO  VPAC to host Pallavotsava in city from tomorrow

Debasish was in his finest elements on the day. Odissi known for its suppleness and laasya, Debasish gave us a new perspective or possibility of doing Odissi as sukumara tandava, especially in his expounding of ashta shambhu. The Pootana Mokasha and Vishwaroopa in the open mouth of Krishna drew applause for its effective story unfolding. The artiste’s performance was the cherry on the cake.

Showered constantly, with women artistes, in dance concerts, this festival, showcasing male dancers, was truly a whiff of fragrant freshness. One left the auditorium with a satisfied statement “Men too can dance, and dance beautifully.”