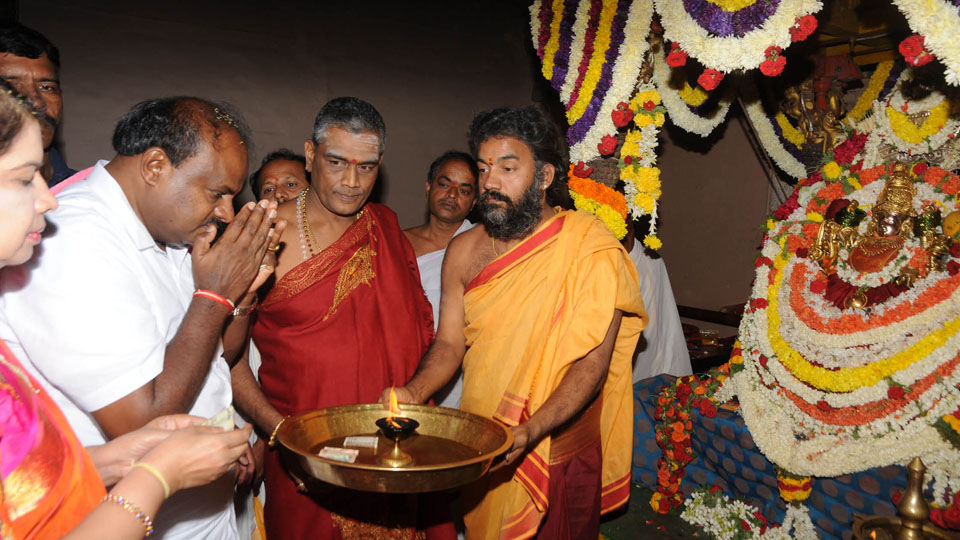 Mysuru:  Thousands of devotees from across the State thronged Chamundi Hill on First Ashada Friday this morning to offer puja to Goddess Chamundeshwari. CM H.D. Kumaraswamy, accompanied by his wife Anitha, arrived at the temple at around 1.35 pm and offered prayers to the  presiding deity.

After performing puja at Talacauvery, the birthplace of River Goddess Cauvery at Talacauvery this morning, the CM’s cavalcade proceeded by road to Periyapatna and from there, his chopper took him to Mysore Airport at Mandakalli. His convoy then moved up the Chamundi Hill.

Temple authorities had closed the temple doors for devotees at around 1 pm following the CM’s visit. The closure annoyed the devotees who stood in serpentine queues waiting for hours for their chance to pay their obeisance to the deity. The CM came out of the temple at around 1.50 pm. On his arrival at the temple, the CM was accorded a grand welcome at the entrance by Chief Priest Dr. Shashishekar Dikshit, Temple Executive Officer K.M. Prasad and other officials. Ministers G.T. Devegowda, D.K. Shivakumar and S.R. Mahesh accompanied the CM. 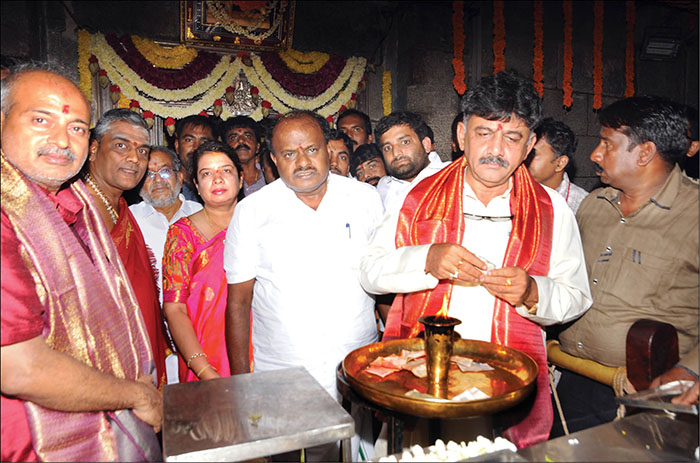 For Ashada Friday, rituals began as early as 3 am with the performance of Abhishekas under the guidance of temple priests Shashishekar Dikshit and Devi Prasad and continued till 5.30 am after which the temple was opened for devotees. 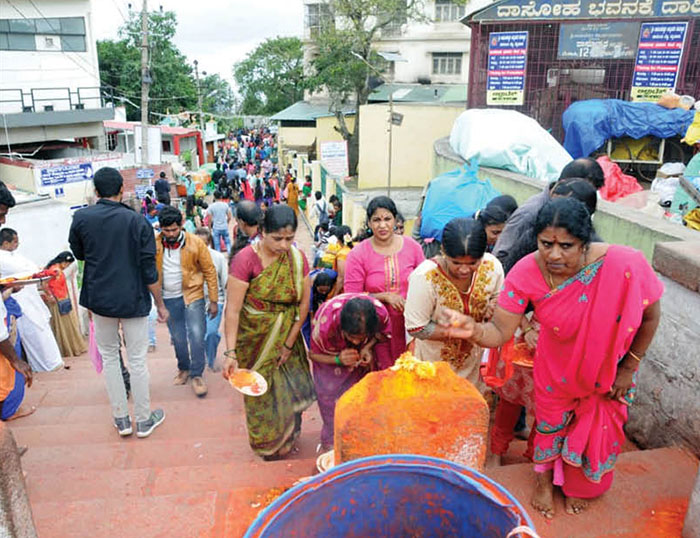 The Mysuru district administration has made elaborate arrangements to facilitate smooth entry and exit to and from the Chamundi Hill and darshan at the temple. Barricades with nets alongside were erected to regulate the flow of devotees. Temple authorities issued special entry tickets priced at Rs. 300 and Rs. 50.

Private vehicles were banned atop the Hill to avoid congestion and the devotees were ferried for free to the hill temple in KSRTC buses that operated from the makeshift bus stand at the Lalitha Mahal Helipad. The KSRTC also operated special buses to Chamundi Hill from the city bus stand for the benefit of devotees.

The sanctum sanctorum of the temple was specially decorated with flowers on the occasion. Minister G.T. Devegowda has sponsored the flower decoration with thousands of devotees thronging the temple right from early morning. The Police had made elaborate security arrangements to ensure safely of the devotees. The Police had also erected banners and placards at several points atop the hill warning the devotees against pick-pockets and other thieves. The temple will be open to the devotees till 10 pm today.