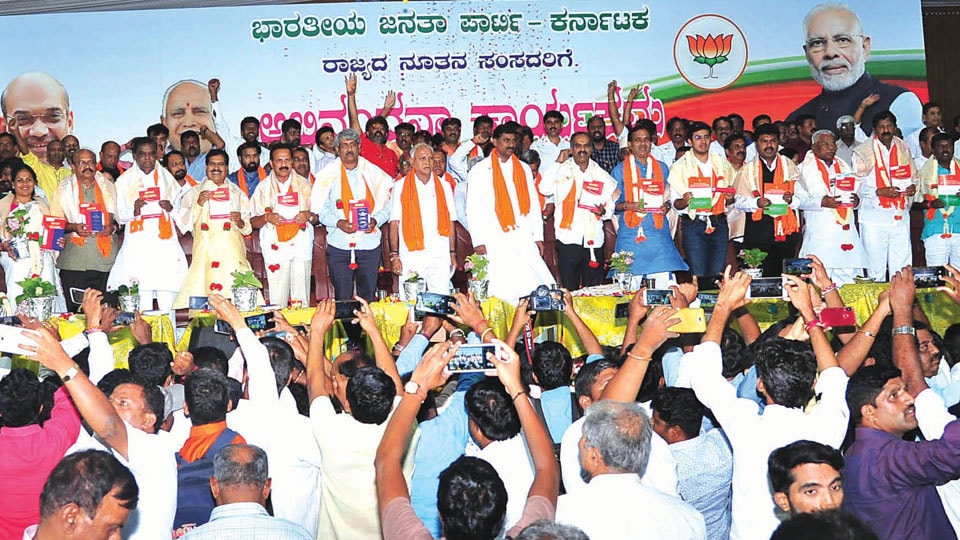 Bengaluru: BJP General Secretary P. Muralidhar Rao on Wednesday predicted that the JD(S)-Congress Coalition Government in the State was set to collapse any moment, leading to fresh Assembly polls.

Rao was addressing the party workers at a programme organised by the BJP to felicitate its newly elected MPs from the State at Palace Grounds in Bengaluru yesterday.

Maintaining that everyone in the ruling coalition was trying to bring down the other, which will result in the collapse of the government itself, Rao called upon the BJP workers to be ready for Assembly polls, which may happen anytime.

Asserting that the BJP would not indulge in ‘Operation Lotus’ to topple the Government, he claimed that there was no need for the BJP to take up the operation as people themselves have performed an operation on the coalition partners by defeating the JD(S) and Congress candidates in the LS polls.

Continuing his tirade against the Coalition Government, Rao said that the State Government does not have the people’s mandate as the coalition candidates were routed in the LS polls. The people themselves will do an operation and throw out the government, he added.

In his address, State BJP Chief and former CM B.S. Yeddyurappa (BSY) claimed that a large number of leaders from the coalition partners were eager to join the BJP.

Hitting back at former CM Siddharamaiah for his criticism on BJP for not giving any Ministerial berth at the Centre to any dalit MP from Karnataka despite the party winning all seven reserved seats, Yeddyurappa said the BJP Central leadership was set to include a dalit MP from the State in the Ministry during expansion.

Maintaining that the countdown of the Coalition Government had begun with internal squabbling amongst the coalition partners touching peak, Yeddyurappa alleged that the State Government had failed on all fronts.

All the BJP MPs were felicitated and were presented with a book on the Constitution, along with a sapling to mark World Environment Day on the occasion.

Yeddyurappa will commence his tour on June 7 by visiting Badami Assembly segment, which Siddharamaiah represents and then Hungund in Bagalkot district. On June 8, he will visit Koppal and Lingasugur. On June 9, BSY will got to Yadgir and Gurmitkal where Kumaraswamy plans to launch his Grama Vastavya (village stay) programme later this month.