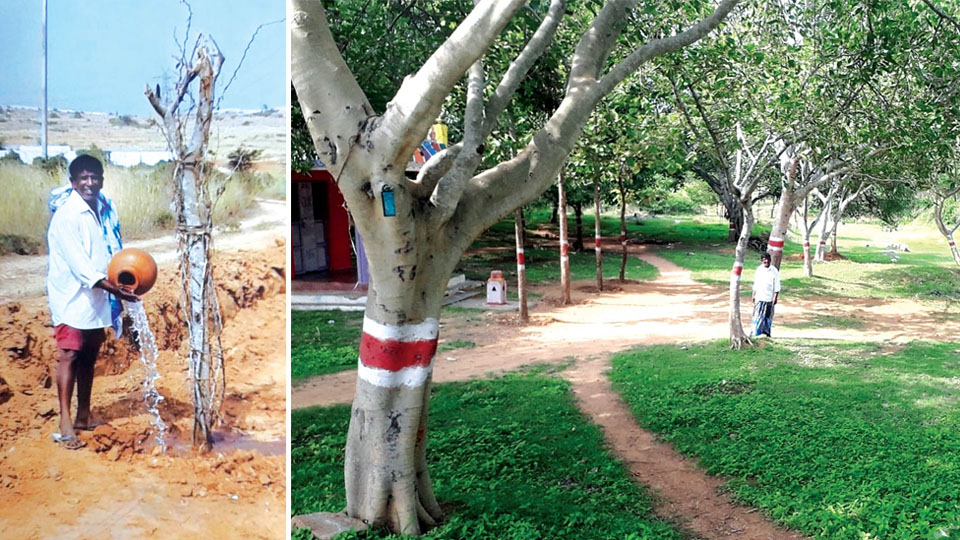 He planted more than 100 trees in a dry village

Mysuru: At a time when existing plants and trees are coming under axe in the name of development, there are a few who are working honestly to conserve greenery.

Meet Javaraiah of Bastipura village in Srirangapatna taluk who has been into this selfless service of nurturing and conserving hundreds of trees from the past three decades, setting an ideal example for others.

Seventy-two-year-old Javaraiah, son of Maraalaiah and Nanjamma of Bastipura, has been tirelessly working as a green activist with a sole aim of contributing something to the society. After his retirement from Mysore Paper Mills, he thought of living his retired life in a meaningful way.

He noticed that there was less green cover in his village particularly around Kalamma Temple and surrounding area including the graveyard.

This lack of green cover had increased temperature and also resulted in depleting ground water levels. Later, he, with the help of his family and fellow villagers, started planting saplings. And he never looked back.

Those saplings which were planted in 1990s all around the village lake, temple premises, graveyard and along the roadside have all now grown tall and big.

The road leading to the temple which is about one kilometre from the village is now well-shaded with green canopy, bringing smiles on the faces of villagers who visit the temple.

One can often find people sitting under the shade of tree on hot summer days.

Villagers, who have high respect for Javaraiah, call him a nature lover and wholeheartedly appreciate his single-minded efforts towards conservation.

Not only did he plant saplings but also ensured that the trees grow to their full potential and protected the same from animals and vandals.

“We should not limit ourselves to selfish motives but strive and work towards contributing to the society which we are part of and this leads to a sense of satisfaction. Instead of sitting idle after my retirement, I thought of planting trees in and around my village. I started planting 8 to 10 varieties of tree saplings including Honge, Peepal, Banyan, Neem and others around the lake, graveyard, and temple and wherever I could find enough space. Villagers supported me in this endeavour in many ways like collecting fine from those persons who harmed the trees that I had planted,”  says Javaraiah.

“Till now, I have planted more than 100 trees. If somebody who takes shelter on a sunny day remembers me for providing shade, it is enough for me and there can be no greater reward than that. I have also built water tanks for cattle in my village as well as Benkipura and Gowripura of Hunsur using my own money,” he adds.