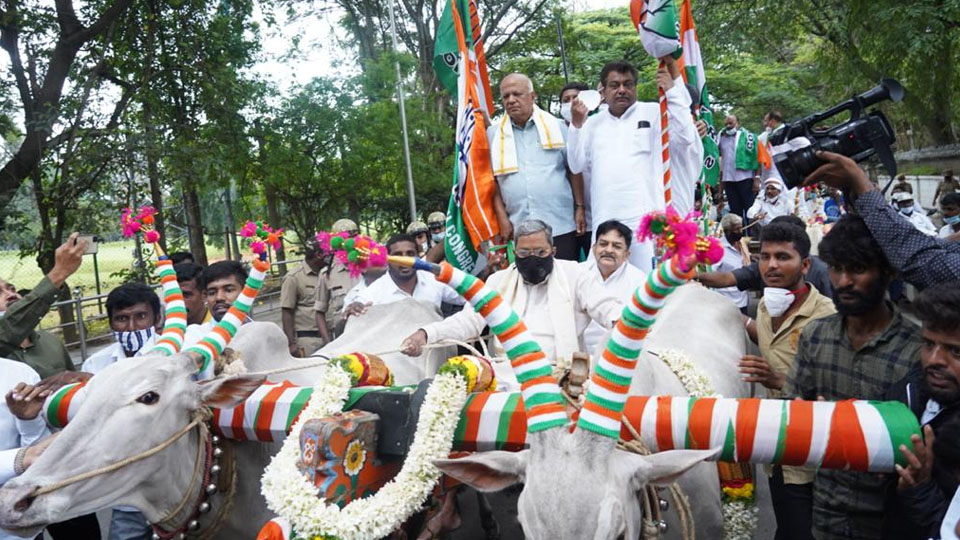 Bengaluru: The 10-day Session of the State Legislature, the first Session for Basavaraj Bommai as the Chief Minister, began on a unique note in the State capital this morning, with Opposition Congress members coming to Vidhana Soudha in bullock carts as a mark of protest against rising fuel prices and increasing prices of other essential commodities.

Accusing the BJP Governments at the State and the Centre for failing to arrest the rising prices of petrol, diesel, cooking gas and other essential commodities, which has hit the common man hard amid the COVID-19 triggered crisis, the Congress legislators led by KPCC President D.K. Shivakumar and Opposition leader Siddharamaiah marched in a bullock-cart procession from KPCC Office on Queens Road to Vidhana Soudha.

Raising slogans against the BJP Government, the Congress leaders arrived in bullock carts to take part in Assembly Session but were stopped near Vidhana Soudha entrance gate by the Police. Following this, a heated argument broke out between the Congress leaders and the Cops. However, the Police, after much deliberation, allowed only the bullock-cart carrying Opposition leader Siddharamaiah and KPCC President Shivakumar to enter Vidhana Soudha premises, while stopping the rest of the carts that carried Congress leaders like Dr. G. Parameshwar, M.B. Patil, Eshwar Khandre and S.R. Patil.

The bullock-cart protest march also saw some anxious moments as Congress MLAs Venkataramanaiah and B.K. Sangamesh reportedly fell off from the cart near Vidhana Soudha entrance, as the pair of bullocks, apparently getting scared by the presence of a large crowd, moved suddenly in a wayward manner leading to the leaders losing balance.

Speaking to press persons after entering the Vidhana Soudha premises, KPCC President Shivakumar said that the Congress is armed with a battery of charges to take on the ruling BJP Government in the Legislature Session.

Highlighting the issues that the Congress would raise in the Assembly, Shivakumar said that the Congress will oppose the implementation of the National Education Policy (NEP)-2020, take up the issue of failure on the part of the Government to get its share in GST and other allocations in Centrally-sponsored schemes, large-scale job losses, improper handling of recent floods and other natural calamities, lapses in giving compensation to workers from the unorgansied sector, among others.

Meanwhile, the JD(S), another Opposition Party in the Assembly, too is likely to corner the Bommai Government on issues relating to Karnataka’s pride (Asmitha) and implementation of Mekedatu and Kalasa-Banduri river projects, which Tamil Nadu and Goa are opposing.

Ready to take on Opposition: CM

Chief Minister Basavaraj Bommai, faced with bullock-cart demonstration by the Opposition Congress in his first Session as the CM, this morning said that the grand-old-party did nothing on rising fuel prices when the Congress headed UPA Government  was in power at the Centre. Contending that fuel prices went up by over 100 percent when the UPA was in power, Bommai said, “I am sure the Congress will raise many issues during the Legislature Session and I will answer the Congress point by point on all the issues.”