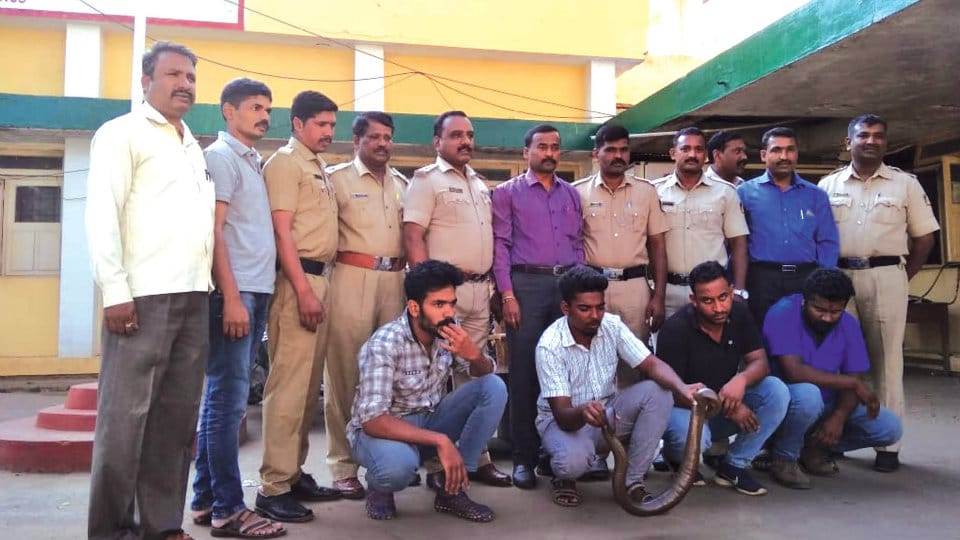 Hunsur:  Hunsur Police have arrested a person on charges of catching a Sand Boa snake at Nagarahole National Park and trying to sell the same. The Cops have seized a goods vehicle, one two-wheeler besides rescuing the snake from him.

The accused, identified as 30-year-old Aravindan of Tiger Block in H.D. Kote taluk, was produced before a Court, which has remanded him (accused) to judicial custody, according to Hunsur Sub-Inspector Mahesh.

It is learnt that Aravindan had illegally caught the Sand Boa snake at Veeranahoshalli forest in Nagarahole Reserve Forest and had sold the snake through Abhishek of Kodagu to Kaverappa and Somaiah for Rs.2 lakh and had received Rs.1 lakh as advance.

Meanwhile, Kaverappa and Somaiah were trying to sell the snake to a person in Kerala for Rs.10 lakh at a hotel near Halagere on the outskirts of Hunsur and were in talks with the Keralite, when someone informed the Hunsur Police.

Hunsur Police, who rushed to the spot, conducted an enquiry, during which they came to know that they were trying to sell the Sand Boa snake following which all the accused were taken into custody. While Aravindan has been remanded to judicial custody, the Hunsur Police are conducting enquiry on Kaverappa, Somaiah and Abhishek.

Sand Boa snakes are being caught and sold illegally by poachers to make easy money because of the myth that the two-headed reptile has special powers in detecting hidden treasure. Sand Boa is a non-venomous nocturnal species and spends most of its time underground; use dry and sandy soil for burrowing and is mostly active at night. This snake has a rather blunt tail, which makes the onlookers to believe that it has two heads, one at each end. The tail is usually slightly darker than the rest of the body. Sand Boas are extensively trafficked from various Indian States, and the main reason behind this is believed to be the superstitions and the use of the snake in black magic. Such blind faith has resulted in endangering the species, and in illegal trade in India, despite being a protected species under Schedule II of Wildlife Protection Act, 1972, of India.